Hewlett-Packard Laying Off 30,000 Workers, AKA Pulling A Carly 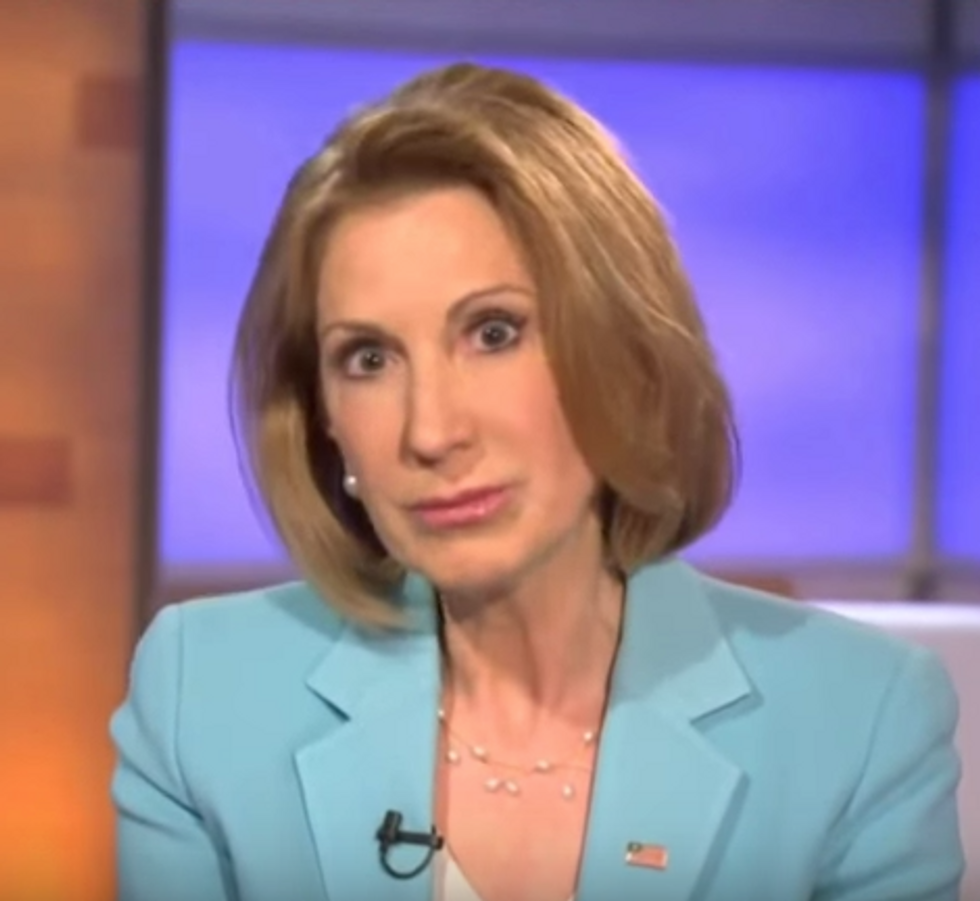 This is a tad awkward. On the very same day that Hewlett-Packard's former Dame of Destruction graduates to the grown-ups' debate table -- not that it has anything at all to do with wanting to put a girl on the stage, definitely not, she earned that special dispensation from CNN to be Lucky No. 11 in a debate of the top 10 candidates -- we have headlines all over the news that appear to be from the mid-aughts, when CEO Carly Fiorina fired 30,000 employees. But no, this is happening right now:

Hewlett-Packard said Tuesday it will lay off up to 33,000 more employees as the storied Silicon Valley tech giant prepares to split in two.

The layoffs -- which are only the latest big cuts under CEO Meg Whitman -- represent more than 10 percent of HP's 300,000 employees worldwide. Company executives told financial analysts in a San Jose meeting that employee cuts and other restructuring would save at least $2.7 billion annually.

Analysts predicted the cuts will be painful, and speculated that they may be a prelude to selling off part of the corporation. Whitman said in a statement the cost cutting "will eliminate the need for any future corporate restructuring." The company declined to comment on specific details.

And gosh, we'd damn near forgotten about Meg Whitman, the other lady Republican business lady loser who unsuccessfully ran for office in California in 2010 and lost, just like Carly! Let's remember that shit show now, shall we?

Whitman wanted to be the governor of California, and that did not go very well for her, despite her experience running eBay, which is incredibly similar to Carly's failtastic experience at HP. Also incredibly similar to Carly, Whitman had a long record of not participating in the democratic process because, she said, she was too busy raising a family to even register to vote until she was 46. Plus, firing the undocumented Mexican immigrant who'd cleaned her house for nine years, because, just like Mitt Romney, once she decided to run for office, she couldn't have an illegal working for her, for Pete's sake! -- well, that didn't make her look too good either.

Once the wounds had healed from Jerry Brown kicking her ass, Whitman went on to get a real job, sort of, as CEO of Hewlett-Packard, unlike Carly, who went on, following her equally brutal ass-kicking by Barbara Boxer, to do a lot of nothing because who the hell would want her, after how she burned HP to the ground and snorted its ashes? And while Carly is still proud of her record of doing that -- maybe snorting ashes really can get you high! -- and she has threatened-slash-promised to run on that record all day long, she might want to drop mentioning her HP experience for the time being, and refrain from mentioning it, if she possibly can, at the Republican debate, what with all these nostalgic headlines. And darn it, just when she'd finally convinced trazillionaire jerkhole Tom Perkins, one of the HP board members who'd voted to fire her way back when, to go public with his faint praise of saying she wasn't all that bad, actually. (But actually, she was that bad. That's why Perkins et al. fired her, remember?)

Was it not just a few weeks ago that People Who Know Things were tentatively speculating maybe Carly's destruction of HP to save HP wasn't a complete failure after all because, why, look! It is, a decade after she was booted, sort of recovering! Yes, yes, what was it Perkins wrote?

Not only did she save the company from the dire straits it was in, she laid the foundation for HP’s future growth.

Hmm. Well, then, it would be irresponsible not to assume that Perkins -- the one person who has tepidly supported Carly's HP record -- also believes Carly laid the foundation for this latest round of layoffs and drain-circling. Because Carly didn't merely burn that mofo down; she salted the earth before golden parachuting away.

We know that Donald Trump hears about all the news, all the time, so we certainly hope he's heard about this, and we encourage him to mention it repeatedly, with scorn, at Wednesday's GOP debate, when he explains why her "persona" is too ugly to be president.

Good news for Meg Whitman, though. When HP eventually fires her ass, she might also score a $40 million “Go the hell away!” package, and then she too can run for president.