Hey, Boomers, Maybe Don't Brag About How 'Your Generation' Thought Of Sexual Assault? 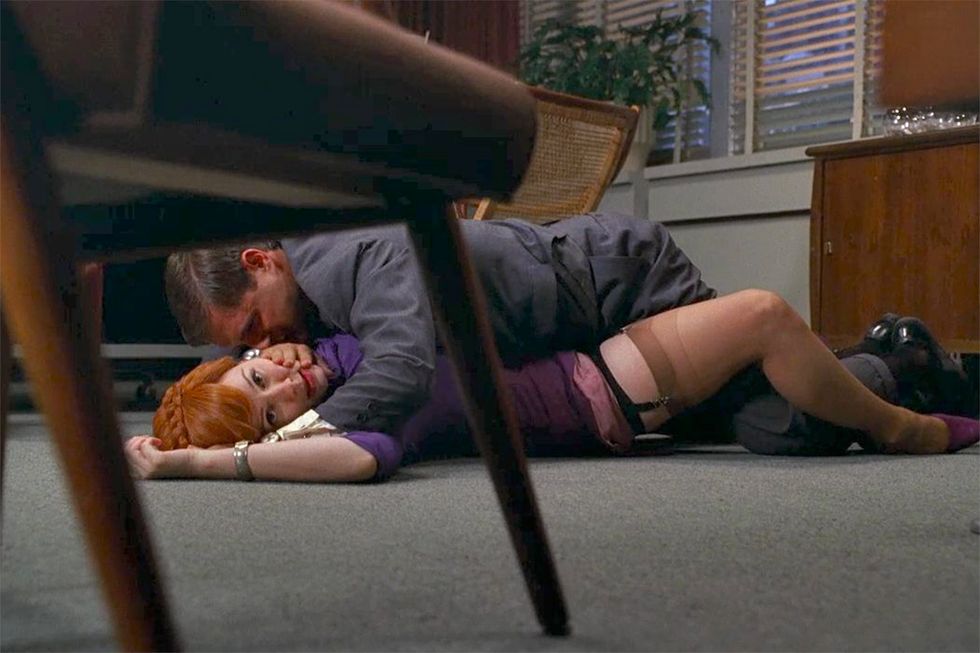 This was what my baby boomer mom said, over 10 years ago when I first took her into an American Apparel, thinking she'd like it due to the vast amounts of black turtlenecks available there and the fact that they didn't use sweatshops. But between what she knew about Dov Charney -- the Jane article in which a reporter witnessed him getting a blow job from an employee -- and the pictures on the wall, which to her looked like pictures of captive women taken against their will, she couldn't spend more than a minute in the store. It made her sick.

According to her, there are a lot of things they would have burned right down. As she so often reminds me, they would not have put up with bikini waxes..

"We were trying to make it so you didn't have to shave your legs, and you all come up with this shit? YOU'RE SUCKERS. Some man told us to do that, we would have LAUGHED RIGHT IN HIS FACE."

However, as much as she complains about what we are willing to put up with today, or what we were willing to put up with 10 years ago, it's with an awareness of what people were willing to put up with in the '60s and '70s outside of the feminist movement, which was just starting then to confront the problem of sexual assault. Those who weren't attending consciousness-raising seminars and setting up rape crisis centers. Because she'll also tell me that when she was in college, when some ass raped or sexually assaulted a woman, people -- most of whom were women -- would get mad at her for "holding a grudge" against the guy and refusing to shut up about it. Certain things run in our family.

She knows what the laws were like back in those days, too. New York, in the '70s, had some of the strictest rape laws in the country, and yet victims were still required to not only be able to immediately tell the police the identity of the perpetrator, but provide "proof" that they were forced. In many other states, a "witness" was required. You know, because so many rapes occur right in front of uninvolved bystanders.

I'm telling you all this as a lead up to some things that were said, in a New York Times article published on Sunday, by some women who believe their sons were wrongly (but not "falsely") accused of rape.

Some of these women were the same women that met with Betsy DeVos earlier this year. You know, the ones she was talking about in that speech where she explained why she was getting rid of the Obama-era laws that required colleges to take sexual assault more seriously? These women are part of a group called Families Advocating for Campus Equality (FACE).

The mothers lobby Congress, testify on proposed legislation and policy, and track lawsuits filed by men who say they have been wrongly accused. A bill in the California Legislature that they testified against, which would have enshrined the Obama-era regulations into state law, passed both houses but was vetoed this month by Gov. Jerry Brown, a Democrat, who said it was “time to pause” on the issue.

There are a few incredibly telling things in the article, particularly the quotes from one mother, identified only by her first name, Judith.

Their sons may not have been falsely accused, the mothers said, but they had been wrongly accused. They made a distinction.

One mother, Judith, said her son had been expelled after having sex with a student who said she had been too intoxicated to give consent.

“In my generation, what these girls are going through was never considered assault,” Judith said. “It was considered, ‘I was stupid and I got embarrassed.’”

Technically, Judith is not entirely wrong here, but what she is failing to understand here is that her generation was absolute shit when it came to sexual assault. Especially sexual assault on campus. Women were blamed for their own rapes in those days, and nothing happened to the men who committed those crimes against them. In those days, the women were the ones who left campus in shame.

It may not have been "considered assault" -- but that is what it was. Putting the blame on women -- hell, women putting the blame on themselves for being "stupid" -- was a way of making a terrible thing that happened to them somehow less bad, less traumatic. "This was normal, I brought this on myself. Boys will be boys! Can't blame them for taking advantage!"

Do false accusations happen? Sure, but they're rare. Most women who are sexually assaulted never report anything, because there is not a lot that is fun about reporting a sexual assault. It is also pretty damned unlikely that a woman is going to feel so "ashamed" about having consensual sex that she's going to go through the added stress and invasiveness of reporting said consensual sex as rape, thus drawing attention to it. Who on earth does that make sense to?

Obviously it is difficult to see one's child being accused of something like rape, and it's probably not surprising that she believes in his innocence. It is hard to believe that someone you love, someone you raised, could do something so horrendous. That is one thing. But taking that anger and deciding that what you want is to make things harder for women on campus to report being sexually assaulted, just in case they might be "falsely accusing" someone, that is low.

Just because terrible things were normalized "in your generation," Judith, doesn't mean you were right. It was bad and you should feel bad.

But we hear this a lot, right? Like with Harvey Weinstein explaining that sexual harassment was just normal in the '60s and '70s.

“I came of age in the 60′s and 70′s, when all the rules about behavior and workplaces were different. That was the culture then.”

For some reason, they fail to understand that it being "the culture" or it being the way their "generation" looked at it does not make it less wrong.

Judith had more to say, later on in the article:

Judith, whose son was expelled, said that at first her son did not tell her about the complaint against him, thinking he could handle it alone. She found out when he was taken to a hospital, suicidal.

She described herself as a lifelong Democrat and feminist who went to college in the 1970s at the height of the sexual revolution and women’s liberation movements. Her husband and their two sons were “super respectful” of women, she said.

“We don’t really need to teach our sons not to rape,” she said.

Second, perhaps Judith wasn't paying enough attention during that time, because a pretty big part of the "women’s liberation movement" was about changing rape laws and acknowledging sexual assault as a problem. It was not all free love and zipless fucks.

It was also the time Against Our Will by Susan Brownmiller started to address the issue of rape culture. It was when groups like Bay Area Women Against Rape and the Washington D.C. Rape Crisis Center started creating resources for this problem that was going very much unaddressed. It was when consciousness raising seminars first got women to start talking about their own experiences of sexual assault, and started providing the vocabulary with which to address it. Women who fought to change the laws about requiring witnesses, laws about marital rape, and statutory rape and the way we talk about consent. If she had been paying attention to that part of the "women’s liberation movement," perhaps she would have considered it necessary to teach her son not to rape. Perhaps she could have told her son that when he sees a very intoxicated woman, that he should try to help her and make sure she is OK, instead of sticking his dick inside of her. To perhaps err on the side of caution.

Women back in her generation realized that the way their "generation" thought about rape and sexual assault was wrong, and that's why they fought to change it. It's a shame she hasn't figured that out yet herself.

Wonkette is ad-free and supported by Readers Like You.