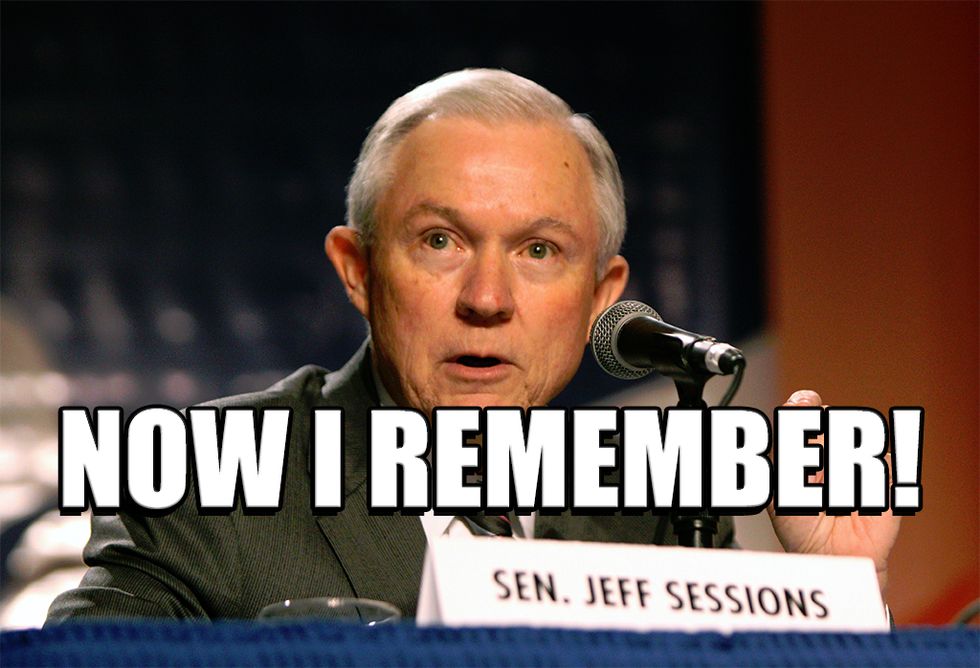 It's time! "Recused" shithead yokel Attorney General Jeff Sessions is testifying before the Senate Intelligence Committee, and we are LIVEBLOGGING IT. Right here! Right now! The good senators are just curious about a few things, like did Sessions lie AGAIN about a THIRD MEETING with the Russian ambassador, after he said in his confirmation hearings that he ain't met with none o' them Russians, then had to "correct" that testimony after the Washington Post helpfully "reminded" him of two meetings he had with the Russian ambassador? Will he tell the senators if that's what James Comey meant when he said the FBI knew things about Sessions that would make it "problematic" for him to be part of the Trump-Russia investigation?

The senators will also be just a-wonderin' how much Sessions was involved with Donald Trump's firing of Comey, which happened because of the Russia investigation, the one Sessions is supposed to be "recused" from. Will he answer their questions about that? Or will he claim executive privilege, like some suggested on Monday? That sure would be weird, since the Justice Department said Sessions is so excited about testifying publicly, because he really wants to "come clean" about everything. Uh huh, ayup!

Finally, we bet he'll get questions about the rumors that Trump just might want to get rid of special prosecutor Robert Mueller. Would Sessions "unrecuse" himself in order to do Trump's bidding? Would he resign? Would he go hide under his desk with his Alabama butt-ass stuck up in the air, because he is "recused" after all?

So yes, this is your liveblog, and also your livestream, so you can watch it with us RIGHT HERE. We might just transcribe his words in full, because he only speaks five and one half words per minute. You ready? LET'S GO!

2:10: Knock knock who is there, is this thing on? Welcome to Wonkette's liveblog of Jeff Sessions! We love you, everything is terrible! We are T-minus 20 minutes to LIE-THIRTY!

2:20: TV news says Trump's goon lawyer Michael Cohen, the "SAYS WHO" guy, will be testifying before the House Intelligence Committee ... in SEPTEMBER. That is like one million years in Trump Administration Days, will anyone even still be alive by then?

2:33: They are late like a common Obama. Maybe Jeff Sessions is still in a lunch meeting with a Russian.

2:41: It's time! John McCain is coming to his seat! Wonder if he'll have awesome questions today like he did at the Comey hearing.

This is gonna be great, just great.

2:47: WHICH LIES YEW WANNA HEAR? GRILLED UP A BATCH OF 'EM LAST NIGHT BACK IN BAMA!

2:52: "What. In the blessed name. Of Republican Racist Jesus. HAVE I DUN GITTED MYSELF INTO?"

2:59: Sessions says in his opening statement that he will answer the questions "as fully as the Lord enables him" to do. Says he probably won't answer all their questions about his conversations with the president, and doesn't remember all this Russian malarkey about ambassadors or collusion, and besides, what is this investigation about anyway? NOT JEFF SESSIONS. That's what the Lord told him anyway.

Moreover, he is APPALLED and DISTRESSED (ooh he's getting mad!) by the "detestable lie" that he might have colluded with Russia, because that would have HURTED AMERICA, and he LOVES AMERICA.

Moreover, he says Senator Al Franken's question, the one what done on accident maybe got poor Jefferson Beauregard to do accidental perjury with his mouth, was "rambling" and a bad question.

Sessions is aware we still have those transcripts, right?

3:01: Jeff Sessions DID NOT make nookie to that Russian man!

Because the nice law-readin' people at the Department Of Justice done telled him to. He didn't recuse himself because HE had done nothin' wrong, it was just because he figured it would have interfered with all the racist shit he wanted to do as attorney general!

3:06: Sessions describes the time James Comey asked him to PLEASE NEVER LEAVE HIM ALONE WITH TRUMP:

"Mr. Comey expressed concern about proper communications and protocol with the White House and with the president."

3:08: Jeff Sessions says he's recused from the Russia investigation. But, he says, "I DID NOT RECUSE MYSELF FROM DEFENDING MY HONOR AGAINST SCURRILOUS AND FALSE ALLEGATIONS!"

That's right! You will not cast false aspersions on his asparagus, and you will not walk around acting like Jeff Sessions is some kind of dishonorable Russian pee hooker!

3:10: OK, time for questions, so the senators can suss out all the lies Sessions just told.

BURR: Seriously, bro, you don't REMEMBER if that big jolly Russian ambassador was at the thing at the Mayflower Hotel last April?

SESSIONS: I was blind that day.

SESSIONS: I was there because I'm a very curious boy! I had only seen Trump speak once before, and it was at the Jewish AIPACs!

Here is a picture of Jeff Sessions, at the Mayflower Hotel, with the Russian Ambassador, who was wearing an invisibility cloak that day:

Here's a notable Getty pic from the April 27, 2016 Mayflower Hotel event—Kislyak & Sessions both named in the official caption pic.twitter.com/epubUUfkKc