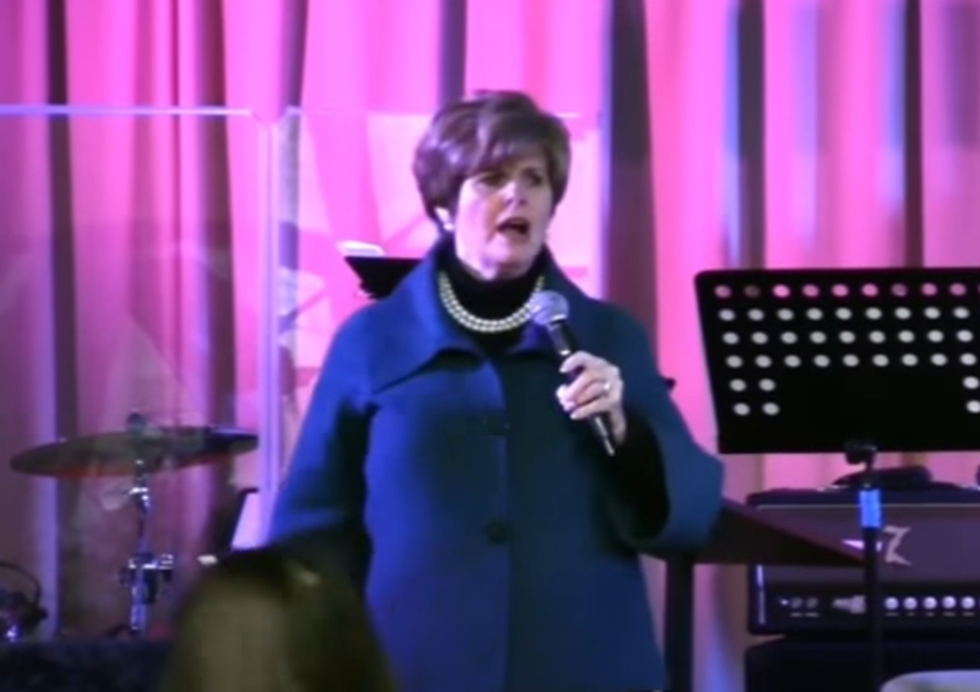 OK, wingnuts need to figure out what conspiracies they actually believe. Because on one hand, we are always hearing about the Worldwide Jew-spiracy Of Global Banking And Also Steven Spielberg Movies, what controls everything. We imagine those Jewishes have a lot of money, if they are really in a conspiracy together! But here is a crazy Jesus lady who apparently believes differently! Her name is Cindy Jacobs, and she is HOLYSHITNUTS. We have seldom featured her on the august pages of Wonkette, but one time in 2010, we (way back when we were a Baby Wonkette!) wrote about how she did a prayer to Jesus and fixed all the lesbians' tongue sins, and also she took the nasty-nasty off of Craigslist, with her prayers.

Jacobs is both a pastor and a prophetess, who wisely discerned that the repeal of Don't Ask, Don't Tell caused dead birds to fall out of the sky and on to Arkansas. At a religious right conference in 2010, she declared, apropos of nothing, "ME AND JESUS, WE HAD THE WILDEST TIME IN PRAYER!" Sounds hot, lady! Maybe that's why she was also able to stop a typhoon one time, with her prayers.

Anyway, today's Word, like we said, is about the Jews, and it is shared at us by Hemant Mehta, AKA "The Friendly Atheist," pfffffft, like there is even any such thing. In it, Prophetess Rev. Jacobs explains that God needs all the Jesus folk to get SUPER rich, so that the Jews, none of whom have ever gotten rich ever, will immediately get jealous and accept Christ as their Lord and Savior, so that they, too, may have granite countertops and the most expensive Netflix subscriptions, or whatever their hearts desire:

“I want to say to you ... that one of the things I believe that’s going to bring a great harvest of Jews ...

“Do you think our poverty is going to make a Jew jealous?” she asked. “Come off it! No, we are meant to prosper. Why? Because they understand, in their culture, that obedience to God brings blessing.”

Is Cindy Jacobs saying that Jews love money? Well she's not not saying it!

Anyway, this is your open thread, so commence to yip-yapping or whatever.

Please Wonkers, we are fully reader-supported and we love the Lord. Give us dollars and make us rich, that we may fulfill Cindy Jacobs's prophecy for the Jewishes.