Hey Mr. Trump: Is A Muslim War Hero's Father American Enough For You? 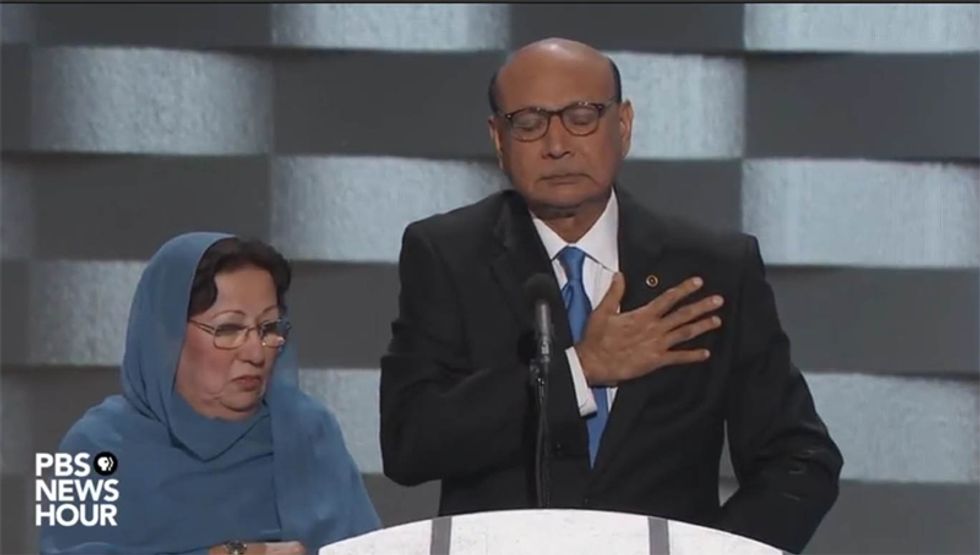 The final night of the Democratic National Convention belonged to Hillary Clinton and her speech accepting the party's nomination, but it was owned by Mr. Khizr Khan, the father of Army Captain Humayun S.M. Khan, who died in Iraq in 2004:

Captain Khan was killed just north of Baghdad on June 8, 2004. A car approached the gates of the base he was tasked with protecting. As soldiers under Khan’s command prepared to inspect the vehicle, his father told us, Captain Khan screamed for his men to “hit the dirt” and walked towards it himself and demanded the driver stop. Inside the car were two suicide bombers and a large amount of explosives. As the car reached the gate, the bomb was detonated, killing Khan and wounding 10 U.S. soldiers. His father believes many more men might have died without Khan’s warning.

Capt. Khan was posthumously awarded the Bronze Star and the Purple Heart.

Khizr Khan and his wife Ghazala were introduced by Kareem Abdul-Jabbar, one of those Muslim sports heroes Donald Trump didn't think existed. Abdul-Jabbar introduced himself with a fine little jab at Trump: "Hello, everyone. I’m Michael Jordan, and I'm here with Hillary. I said that because I know that Donald Trump couldn’t tell the difference.” Nicey played, sir. It was his best comedic performance since Airplane, although he quickly moved on to the serious business: If an entire presidential campaign is going to be based on labeling vast groups of people as potential criminals and terrorists, you're going to hurt a hell of a lot of people. Like, lets' say, the families of war heroes.