Hey You Sad, Sulking Liberals, Get Off Your Asses And DO THIS. 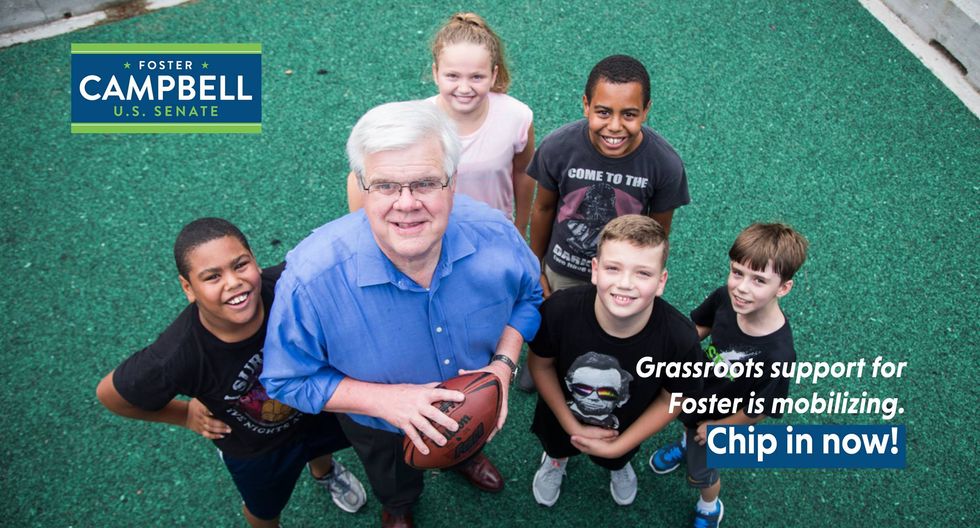 Hey, you there! You are a sad Hillary voter, or you are a person saying arguments to the internet about how Bernie would have won (NO MORE DISCUSSING THAT), or you are protesting in the streets, or maybe you are just curled up in a ball day-drinking and waiting for the end of America on January 21. That's all fine, and we need to have time to process and mourn and eat our feelings, but it's also time to get FIRED UP, READY TO GO! for what needs to be the greatest period of libtard/progressive civic engagement in American history, at least since the first time "Arrested Development" was canceled.

The dealio here is that one million and five people were running for the Louisiana Senate seat formerly diaper-stained by gross diaper man David Vitter. Since nobody won a majority of the vote on election day, it's going to a run-off, which will be held December 10. The Republican challenger John Kennedy got 25% of the vote in the first election, whereas Foster Campbell got only 17.5%, and Kennedy reportedly has a lot of structural advantages and more money dollars. But what did we learn last Tuesday? We learned you either TURN OUT or you gonna get TURNT OUT, you know what we are saying?

You will do this because, if Campbell wins, the Republicans will only have a 51-49 majority in the Senate, which gives Dems just a little bit more power to push back on Donald Trump's worst plans. It means it won't be as much of a stretch to try to form majority coalitions with Republican senators who are occasionally decent on specific issues, like John McCain with Russia or Rand Paul opposing Rudy Giuliani and John Bolton for secretary of State. If 49 Democrats can pull a McCain and a Susan Collins across the aisle to oppose Trump erecting a statue of Vladimir Putin on top of the White House, we might be able to at least mitigate Trump's damage, is what we mean.

Another reason for why to do this is the 2018 midterms, which we have to start organizing for NOW, so call your mama and call your liberal congressman, and if you don't have one of those, call your local party to see how you can get involved. The Democratic Senate map in 2018 is tough, TO SAY THE LEAST, so having one more seat filled with a Democrat up there in Washington could make a big difference.

He is a good guy! He's a cattle rancher good ol' boy Louisiana dude who just happens to want to raise the minimum wage and go after Wall Street and do something to save Louisiana's coastline, which, in case you have not heard, is disappearing due to global warming and the oil industry. He wants to fix it with SCIENCE! Doesn't he sound like a nice new work boyfriend for Elizabeth Warren?

We think so! So give him money. If you have time for a quick weekender, head to Louisiana -- WHERE NEW ORLEANS IS -- and do some volunteering for him! While you are there, eat at Mandina's and Cafe Degas and also a million other places, we don't care, it's not our responsibility to plan your meals.

Now, don't be all "Meh, Louisiana is deep red, WTF are the chances even?" Remember that Louisiana just elected a nice Democratic governor named John Bel Edwards (who was running against diaper boy), and also look at this picture of Campbell's butt and note that he is wearing Wranglers. Told you he was a good ol' boy. But a GOOD good ol' boy.

That guy with that Wrangler butt could win. But only if Democrats and liberals and even Trump supporters who might be having a little Brexit-style buyer's remorse DO SOMETHING AND MAKE IT HAPPEN, CAP'N.

OK, we are done ordering you around until next time we feel like it, which is right now. SHARE THIS POST, YOU GUYS, BECAUSE WE SAID SO.