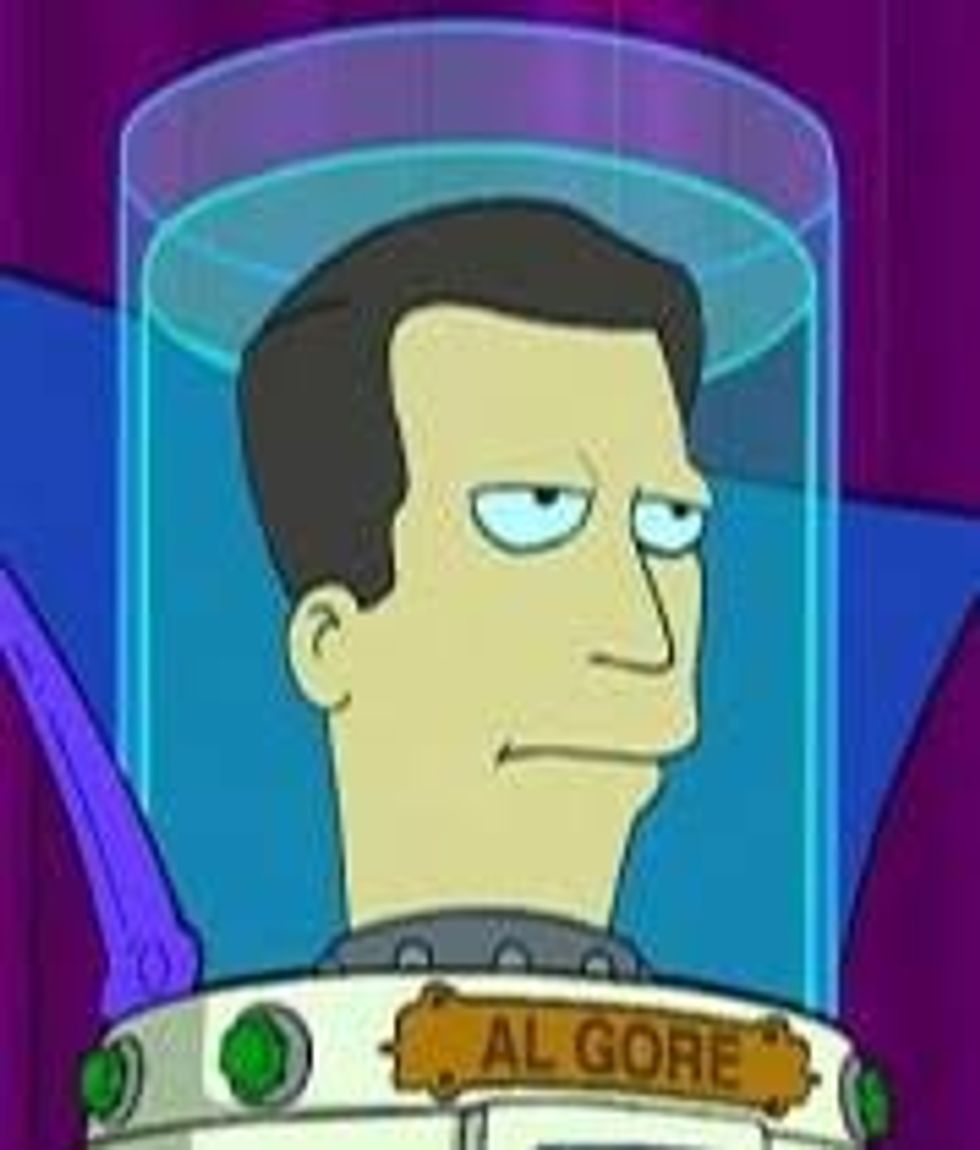 Your Wonkette has been chopped into three pieces, like a Starfish, and your current editor is just sitting in Level Two against a brick wall, on the concrete. We saw Stevie Wonder sing two songs! And, uh, Sheryl Crow sing like 7,000 songs which all sounded like shopping for lawn furniture on heroin. Al, what do you say?

6:45 PM -- Good lord these Democrats are making a ruckus to welcome Al Gore! How many of them voted for Nader in 2000?

6:55 PM -- Gore's southern accent doesn't sound so awful after hearing John "Love Child" Edwards and his terrible accent for so long ... and if not for the Heroes at the National Enquirer, we would be hearing Scumbag John Edwards TONIGHT!

6:59 PM -- Your editor is stuck between a terrible popcorn stand and a grease-nut vendor. There is no booze here, not even beer.

7:00 PM -- Neither Jim nor Sara can get a decent wireless signal in the stadium seats, and they are about four sections apart, and this place is almost completely full of humanity. Even the very top nosebleed seats in the sun, they're filling right up to the top. Craziness. John McCain would have to give a year's free sleeping pills to the jobless elderly of the whole country to get this kind of crowd -- and half of them would die during the speech.

7:03 PM -- There are Obama staffers unfurling huge American flags for whatever purpose ... probably for Obama to burn, with a giant flame-thrower.

7:05 PM -- The dudes told me the giant flags are for "America the Beautiful," to be waved around, and I said, "Oh did Ray Charles come back from the dead?" And they just glared at me, and now that fucking Doobie Brothers guy, Kenny Roggers, Michael Mac Donald, is singing it, Ray Charles style, but minus the talent. Somewhere, Wolf Blitzer is just cold dancin'.

7:06 PM -- Sorry it took a week to get here. Jesus christ. And of course once we got in, every single staffer told us conflicting lies about where we could go, where we could sit, and ultimately we were not really wanted anywhere, except Jim and Sara found single seats far away, and they have no Internets. HOPEY TOOK THEIR INTERNETS.

7:18 PM -- Wow there are a lot of generals out here for Obama, including the famous "General Fig Newton." We have no idea if this is a true name.

7:20 PM -- Is the Secret Service jamming cell phones here? Nothing works. Soon they will figure out my fancy wireless broadband deal and blow up Verizon, for freedom.

7:21 PM -- Fireworks will finish the thing up, we know. But what's the secret surprise, like last night? We think Obama will leave, then come back, by jet pack, wielding a lightsaber, and then he'll zoom around killing the evil snack vendors and just give snacks to everybody. Yes We Can!

7:25 PM -- Ha, Biden just wants to be some old dead football player for the Denver Broncos. Nobody tell Joe that this "Invesco Field at Mile High" was literally built on the ruins of his beloved childhood Mile High Stadium.

7:26 PM -- Those jesus freaks don't have much juice anymore, do they? Beautiful weather, with distant fluffy clouds over the mountains and a million miles of blue sky. And like a hundred cop helicopters.

7:30 PM -- We will get another live-blog ready to go, for Hopey. Then I'll go trade with Jim, and he can write the liveblogging! It is a perfect plan that cannot fail.