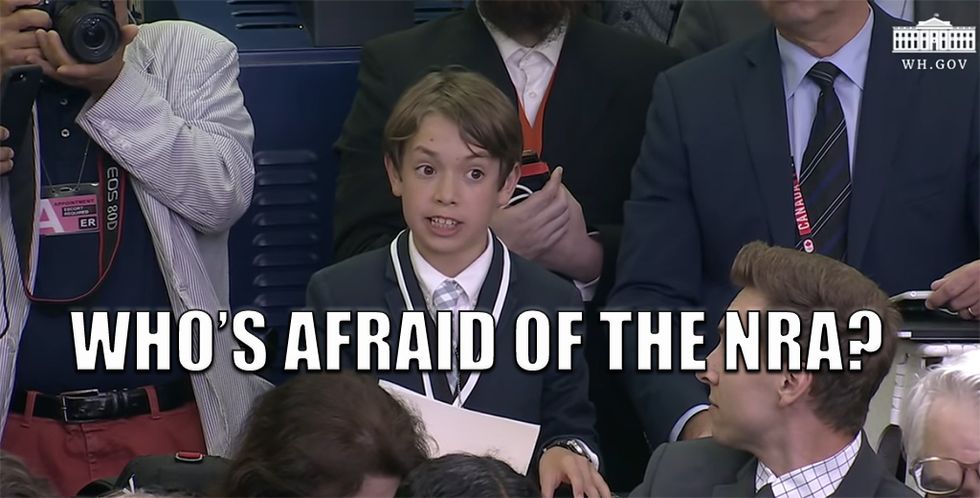 Y'all! Paul Manafort has a shady legal defense fund that doesn't ask any questions, just like Richard Secord's! [Morning Maddow]

Some of Trump's most vocal supporters' lack of support for "spygate" is highlighting how increasingly unhinged Trump has become. SAD.

Trump is promising that big pharma will voluntarily lower drug prices after he signed a "right to try" bill that lets terminally ill patients use experimental drugs. Kelly Sadler could not be reached for a comment.

Speaking of Kelly Sadler, she accidentally sent out an email blast of talking points to a bunch of former Obama officials and Clinton campaign staffers who've publicly said Trump is "bad at playing president."

Sarah Huckabee Sanders was blindsided during yesterday's press briefing by Benje Choucroun, a 13-year-old journalist who wanted to know "specifically...what the administration has done and will do" to prevent more school shootings. After her emotion-suppressing chip kicked in, she dodged the question. Fun Fact: We're up to 23 school shootings in 2018.

The New York Times is shocked (SHOCKED) to learn that school shootings have increased since the 1997 massacre at Columbine.

Bloomberg reports that Trump's net worth fell (again) after people stopped showing up to his trash palaces. [Archive] #DonaldTrumpIsPoor

A new book by former Obama advisor Ben Rhodes is a sorrow-filled look at some of the final days of the Obama presidency, and the earth-shattering shock of Trump's win. Thanks for the memories, Bamz. :(

The Daily Beast wants to know what ever happened to the $7 million Jill Stein conned out of people after the 2016 election?

Nikki Haley has a very sad op-ed about South Sudanese children that nobody will care about because it's one of those "shithole countries."

The Federal Reserve is scuttling large chunks of the 2010 Dodd-Frank law after big banks complained that the post-banking crisis rules made it too hard to gamble with other people's money. Thanks anyway, Obama. :(

Mark Warner says Democrats won't expand their investigation into Russian fuckery if Democrats take the Senate, and noted that Mark Zuckerberg's testimony was an "embarrassment" because it shows how clueless Congress remains about the Internet. [Archive]

A new Politico/Morning Consult poll finds that 62 percent of people find Trump's tweets to be "a bad thing," and 72 percent think he tweets too much.

It's not just Trump or Devin Nunes, politicians are crafting their own narratives to get around traditional gatekeepers in media who do obnoxious things like fact checking, or asking difficult questions.

Rep. Dan Donovan, the incumbent Republican for New York's 11th, didn't vote for the Trump tax cuts (for the super rich), but that didn't stop Trump from endorsing Donovan and awkwardly mistating his vote.

National Democrats have stepped into the California primaries to control the bickering between candidates with shitloads of money and deals crafted in vape-filled rooms.

Teachers demanding more funding and fair wages could be a deciding voice in many local and House races this year as new polling suggests they're tired of getting paid a pittance to deal with fidget spinning brats.

California is poised to enact a stricter net neutrality standard than the previous FCC rules after the state Senate approved new regulations along a party line vote, 23-12. It now moves to the state Assembly, and Gov. Jerry Brown.

Despite protests from Republican legislators about providing government benefits to poor people, Virginia's General Assembly finally voted to expand Medicaid coverage for hundreds of thousands of low-income people, as well as increasing wages for teachers and state workers.

Busboys and Poets, a chain of DC bookstore/cafes, is drawing criticism for passing out a "race card" in an effort to spark uncomfortable conversations from patrons who aren't already engrossed in their phones.

The Pentagon has renamed the Pacific Command to US Indo-Pacific Command as an olive branch to an increasingly intertwined military relationship with India.

Left-leaning Mexican populist Andres Manuel Lopez Obrador is leading the most recent presidential poll, but some analysts worry that his anti-corruption and nationalist rhetoric could be catastrophic for future US-Mexican relations.

Russian lawmakers want Mark Zuckerberg to answer for his "Russophobic" crimes against the Kremlin, and to testify before the Russian Federation Council.

Alibaba's Joe Tsai doesn't understand why the capitalist pigs in the US are trying to hold back Chinese advances in tech and manufacturing, stating, "The Communist party, per se, seems like a dirty word here. But, in China that’s the form of government."

After a series of fatal crashes, Democratic senators Ed Markey and Richard Blumenthal sent out 26 letters to driverless car companies demanding answers on a host of public safety concerns.

Google is helping the Pentagon build brains for killer robots and nerds are not happy.

A well-known 40-year-old exploit is being used by hackers and law enforcement to track and monitor cell phones after carriers failed to fix the problem, and Sen. Ron Wyden wants FCC chair Ajit Pai to do something about it. Spoiler Alert: He won't.

Speaking at the 2018 Code Conference, the CEO of AT&T says Uncle Sam's antitrust suit blocking their buyout of Time-Warner is bogus as AT&T only wants to sell more microtargeted ads than Facebook with the data it's hoovered up from customers. [Transcript]

A fake punk musician is blowing his teenie-bopper fortune on UFO conspiracy theories.

In an effort to drum up clickbait, Buzzfeed rifled through old blog posts from Joy Reid about that dumbass Bush-era 9/11 documentary, so be ready for Reid to get fired for Roseanne being fired.

Sinclair has been cutting deals with broadcasters it doesn't own to air its batshit pro-Trump content in order to skirt federal laws.

Samantha Bee had some brutal words for Ivanka Trump and all the kids being fucked over by Trump's immigration policy.

We're ad-free and reader-supported, so drop us a few bucks to pay the bills and refill the coffee pot!