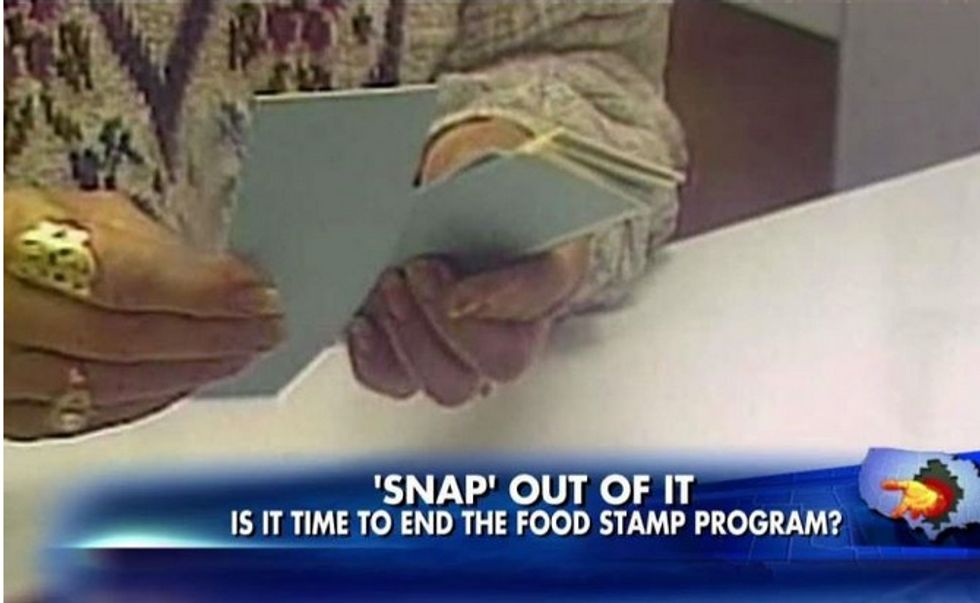 Oh, goody, with the War On Christmas once again successfully won and presumably put away for the year -- though sometimes, like your most-hated neighbor, Fox just leaves its War On Christmas lights up all year -- the "fair and balanced" news network can get back to one of its favorite steaming piles of weasel poop: the notion that food stamp fraud is out of control because of course it is, didn't you see the one surfer dude at the supermarket who bought all those crab legs with an EBT card? You know you did, because it was on Fox! This time around, the headline's pretty subtle:Food Stamp Fraud at All-Time High: Is It Time to End the Program? Here's your fact-free ranting from Tuesday's Fox & Friends:

Fox claims -- without citation of course -- that "$70 million of taxpayer money was wasted in 2016 due to food stamp fraud." How incredibly shocking! It must be time to end Supplemental Nutritional Assistance Program (SNAP) -- the replacement for food stamps -- altogether, since obviously everyone using the program is cheating the American Taxpayer!

Oh, except even the anti-SNAP guest on the segment, Republican New York City Councilman Joe Borelli, casually mentions, without any further explanation, that the amount of fraud is actually about "1 percent" -- which is very, very low, but probably inaccurate as well.

A puzzled Kevin Drum at Mother Jones has fun with the headline and Fox's screaming graphic:

Now, the obvious response to this is twofold. First, they're just lying, aren't they? And second, this is like a headline that says, "Traffic Deaths at All-Time High: Should We Ban Cars?"

Drum also says there's simply no telling what the hell Fox is talking about when it says "food stamp fraud." He points out that even if fraud does total $70 million a year, it's a drop in the bucket for the entire program budget of $71 billion in the most recent fiscal year, which would mean "fraud accounted for a minuscule 0.098 percent of the program budget" -- rounding up, that's a tenth of a percent, not the already tiny one percent Borelli stated. If that number were accurate, then such a fraud rate would mark "a spectacular bureaucratic success," not a reason to eliminate a program that helps millions of people.

Drum goes on to try and suss out what the hell Fox is talking about when they say "fraud" -- it's not inaccurate payments to states, which have declined (and usually get paid back by the states), or even SNAP "trafficking," where retailers accept SNAP payments for items not covered by the program. But even that has declined from the mid-'90s to 2011, the last year for which we have statistics.

As far as we can tell, Fox is simply recycling its already-debunked 2013 reporting on the USDA's investigation of SNAP trafficking, and perhaps cherry-picking some of the data. We haven't been able to find a "new USDA report" on SNAP fraud, but we'll go out on a limb and guess that Fox may have been referring to the very same 2013 data Drum cites, and putting a spin on it. Here's a bit of Googly results we found when searching "USDA SNAP fraud report":

Hey, looks like the USDA released a new report in November of this year, right? Nope. It's still the USDA's 2013 press release on SNAP trafficking, with a note at the bottom saying the page had been "Last Modified: 11/08/2016" -- but not a new report. But if you click around in there, you do find that while trafficking declined consistently from 1993 to 2008, there was a slight uptick in food stamp trafficking between 2009 to 2011:

So maybe that's the "all-time high" they were lying about? No freaking idea, but it's as good a guess as any, and it fits with Borelli's claim that the fraud rate is 1 percent of food stamp benefits. The main thing to keep in mind here is that even when you're talking about an astonishingly high 1.3 percent of benefits being "trafficked" in 2011, that's not a matter of individual recipients getting benefits they don't deserve -- it's retailers (the USDA says mostly small and middle-sized stores) taking SNAP benefits for ineligible, nonfood items. Which is bad, but not an epidemic of fraud, and also something the USDA is obviously working to crack down on. [Update: No, we don't know where that extra zero came from. Our typing is bad and we feel bad]

TL;DR version: Fox News is lying like crazy about Food Stamps again, and gullible morons will now be screaming about record high food stamp fraud all the time. Get ready for the trolls!