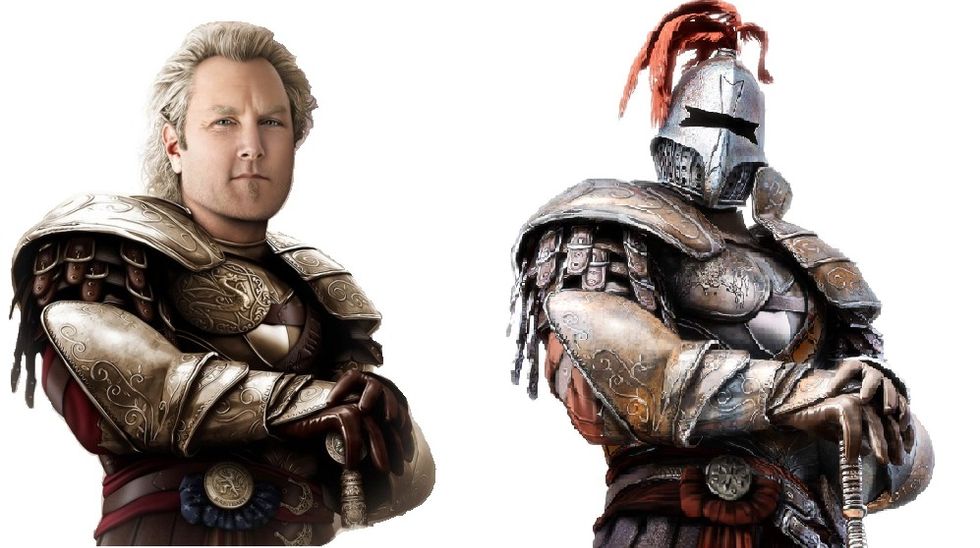 So, you know that painting by David Bugnon of Dead Guy Andrew

Breitbart as a Teutonic Knight in Heaven, ready to take on commies, liberal scumbags, and innocent Department of Agriculture employees from beyond the grave? You know, the painting that one actual professional art critic called a "masterpiece of Outsider art, a veritable holocaust-tsunami of bad taste?" The painting that Patriot Depot is selling reproductions of for the bargain price of a mere $3999.95 for a limited-edition 36″ x 48″ giclee on canvas? The painting which The Patriot Update bravely calls, "The Painting Obama Fears?" Yeah, it's not so much a painting as a Photoshop mashup of a stock photo of Andrew Breitbart and a character from the copyrighted computer game Assassin's Creed: Brotherhood, with a pretty sunset-and-clouds background that probably also came from some stock photo website -- no doubt somebody will find that soon, too. (NOW WITH UPDATE BELOW!)

The similarity to the Assassin's Creed character (© 2010, Ubisoft Entertainment) was first noted by an alert commenter on Mock, Paper, Scissors, and was shortly thereafter posted to your Wonkette by new commenter "PNW_Kurt" in Sunday's Breitbart-as-a-Nordic-Knight thread; longtime Wonketeer Biel_ze_Bubba was also, as far as I can tell, the first to identify the stock image source of the soul-patched Breitbart. The discovery clears up a couple of mysteries.

For one thing, since the image is flipped, that explains why, as another Mock, Paper, Scissors reader noticed, the brave knight "buckle[s] his belts on the wrong side – like a girl." More to the point, it's finally clear why Ghost Breitbart has such tiny little T-Rex arms: While Mr. Bugnon did a pretty nifty job recoloring and embellishing parts of Ubisoft's copyrighted digital character -- the flag-themed bunting and "BREITBART" badge at the beltline are cute touches -- he didn't even come close to giving Sir Andrew of Copypaste an appropriately-proportioned head. Consider this side-by-side comparison of the two images at the top of the post, and compare the colossal Breitnoggin to the far more anatomically plausible (and copyrighted) head on the Assassin's Creed knight, which we've flipped so that you can say "OMG they're just the same."

On his Facebook page, Bugnon at least has the decency to admit that this is not a painting at all, though perhaps it's a slight stretch for him to claim that "many components of this picture were created out of nothing, like the hair, leather armor, the red cloth, belts..." without acknowledging that the basic form of the figure is swiped from someone else's original work (which, as I may have mentioned, is protected domestically and internationally by copyright).

As a conservative, Mr. Bugnon no doubt thinks that private property is a pretty big deal. Of course, as a conservative and entrepreneur, he also thinks that profit is a big deal; our own Biel_ze_Bubba points out that the cost of printing out a 36″ x 48″ giclee on canvas is only about $150. So figuring the production costs and a few hours of Bugnon's time at the computer, that's only about a 2000% markup on the big limited-edition version. Less, of course, if you factor in the licensing fees for using Ubisoft's intellectual property...surely an upstanding conservative wouldn't dream of just plagiarizing, would he?

But is this brilliant example of right-wing kitsch actually a copyright infringement? Or is it some kind of "fair use"? Beats us -- as we experienced internet types say when we want to pontificate about the law but don't want anyone to do something stupidly litigious, I ANAL (an abbreviation that seems just right at home for Our Wonkette). But regardless of whether Ubisoft's legal department sends a big fat Cease and Desist letter to David Bugnon and Patriot Depot (DO IT! DO IT!!), it seems only fitting that Andrew Breitbart, who made a career out of selectively editing bits of videotape to make other people say exactly what he wanted them to say, has been memorialized by a hacked-together Photoshop job constructed out of images sundered from their original contexts. How Po-Mo is that!

UPDATE: The Patriot Depot's page for the painting now looks like this, ha ha: