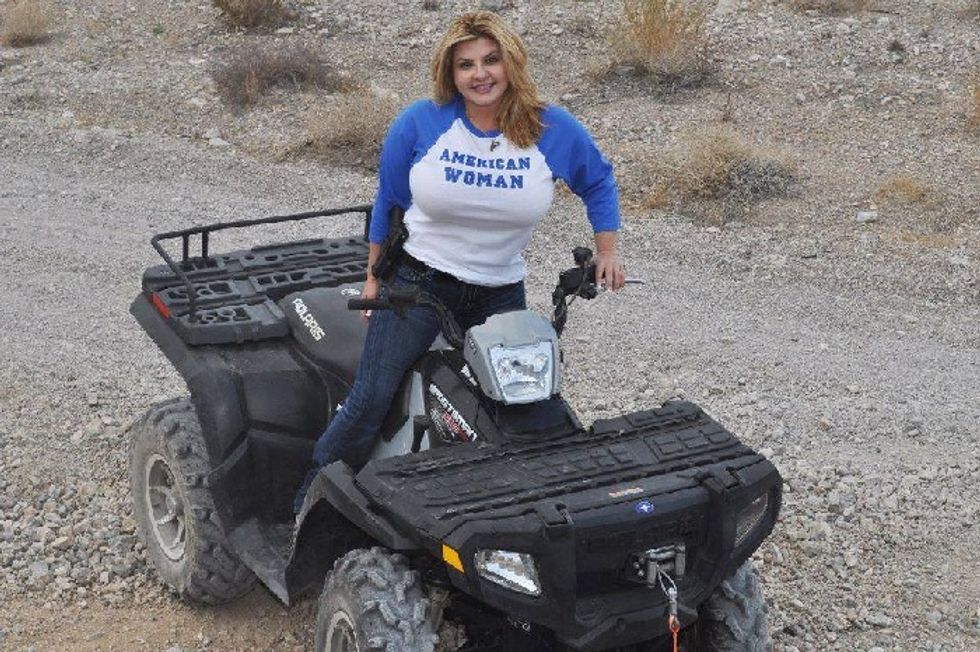 That was a really long 15 minutes

The primary election votes have all been counted in Nevada, and while the news is pretty good for The Republic, it's a sad day for political comedy: perennial Nevada loonypants ladies Sharron Angle and Michele Fiore have both lost their bids for national office. Ms. Angle will now go back to whatever it is she does between losing in elections, and Ms. Fiore had to give up the chance for reelection to the state Assembly to run for Congress, so there's no telling where in the Fox News lineup she'll eventually land.

Nevada's race for the U.S. Senate looks to be a squeaker between two disciplined mainstream candidates. Fortunately, for comic relief, complete goofball Sharron Angle is also running, for the lulz.

As pretty much everyone predicted, Angle was squooshed like a bug in the Republican primary for the Senate seat that Majority Leader Harry Reid is retiring from. Rep. Joe Heck won with 65 percent of the vote, and Angle managed only 23 percent. Heck will go on to face former Nevada Attorney General Catherine Cortez Masto, who easily won the Democratic nomination with 81 percent of the vote against three other candidates. For all her advocacy of "Second Amendment remedies" in the past, Angle is not expected to actually shoot Rep. Heck. But we're waiting eagerly for whatever weird crap she does next.

Michele Fiore, Yr Wonkette's favorite one-l Michele since Bachmann, also lost badly in her run for House District 3, the seat previously held by Rep. Heck. She came in third behind Daniel Tarkanian (son of the famous UNLV basketball coach Jerry Tarkanian), who finally won an election after five consecutive losses, and state Sen. Michael Roberson. In November, Tarkanian will run against Democrat Jacklyn Rosen, who was endorsed by Harry Reid.

Of the losses by Fiore and Angle, Jon Ralston, the God Emperor of Nevada political journalism, says,

As if to put an exclamation point on a night in which so many fringe types with no agendas and only nastiness lost, two women who scarred the Nevada political landscape are departing. Even though two national publications saw fit to profile her in the waning days, Assemblywoman Michele Fiore’s short, sad political career ended as she ran third in a southern congressional primary. She will never win another office in Nevada; a reality show seems a better bet. Or perhaps, a medical program showing how cancer is a fungus or a program teaching 5-year-olds to fire rifles. Also gone and soon forgotten: Sharron Angle, who tried to resurrect herself after her U.S. Senate embarrassment in 2010 but was destroyed by Heck. It wasn’t close, and Angle once again left behind a wonderful legacy as she sent out a piece that accidentally directed people to a pornography site. She also ran TV ads with bunnies and tried to compare Heck to Nancy Pelosi and Reid. That, as always, was the wrong angle.

Yr Wonkette is bereft. Now how will we know which cops are OK to shoot? Or how to whine your way out of inspections of your home-health business (and into bankruptcy)? Or how far the colored people have come? Haha, we are joking about that last one: the colored people are now able to go to college, so racism is over!

We're eagerly waiting to hear from Ms. Fiore on what her plans are now that she's been cut loose from politics. Having already lost her connections to reality a long time ago, the future seems wide open for her. Maybe there's a federal wildlife refuge she'd like to take over. Or she and Sharron Angle could load up on guns, get a '66 Thunderbird convertible, and tour the USA making that cable reality series they've earned. Maybe they can even figure out the right number of consonants their names should have.