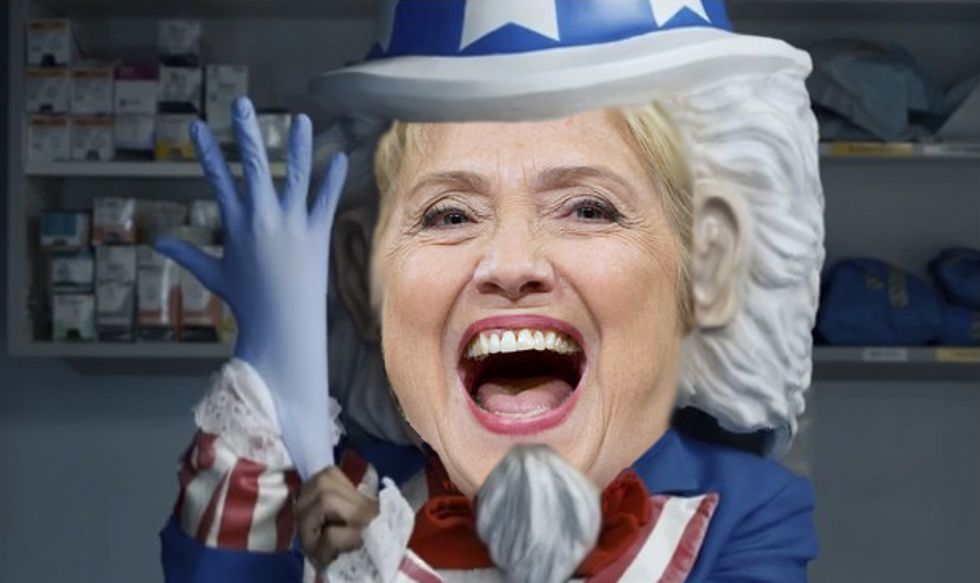 Wonkette assumes no liability for nightmares resulting from this Photoshop

You might think Hillary Clinton is a feminist, but you are wrong. This week, she said "the unborn person does not have constitutional rights," and said "person" instead of "fetus." Then she said you can be a feminist and be pro-life. She did not even say the moar correcter "anti-choice"! HILLARY. If you don't take off your granny bra and burn it right now, we are going to take away your subscription to Ms.

Now that we have correctly yelled at the secretary, let me tell you a story. I was a pro-life little girl. I wanted to be a nun. When Randall Terry came to give a guest sermon at Mass, my mother and I beamed with pride and loudly applauded. I explained confidently to my aunt -- to her bald horror -- that a Catholic high school had every right to expel a student who aborted her child. (I still don't disagree with that.) And on weekends, and before school and after, we protested the nuclear sites, Iran-Contra, and the first Iraq War. And on weekends, and before school and after, we stood on freeway onramps with banners made from bed sheets, campaigning for whichever local Democrat would be hammered mercilessly on election night in our conservative suburb.

By my 20s I was still vaguely pro-life -- with the exception of teens, for whom I thought every abortion should come with an iPod -- but didn't particularly care that much. It was a thing I said with my mouth, but it wasn't in my top 100 action items. I started thinking about how many pregnancies spontaneously abort or miscarry, and switched to vaguely pro-choice. If God (in whom I don't believe) was killing so many babies in the womb, what did it hurt to help Him along? I read Molly Ivins (or Ann Richards? they both said such marvelous things) say you may not like abortion, but you have sympathy and don't judge when that nice lady down the street gets herself in trouble. And then I watched a family member hit his girlfriend in the back of the head, while she was facing away from him, folding their laundry. They were both on meth. She was five months pregnant. And it snapped. This baby needed to be aborted, even at late term. She needed to get away from him; she needed to have no ties. This little baby -- sure, a "baby," not even a fetus, why not -- was going to be born on meth in abusive Crazy Town. It was all going to be awful. It would have a life of distress and pain. And the rest of my family called her and called her, offering to take the baby, begging her not to do it.

I told them they needed to shut the fuck up and leave her alone, and I paid for the late-term abortion. I now think every abortion should be legal, even if the woman's reason for getting it is so she can jet off to the French Riviera in a gold lame Princess Leia bikini. (I'm totally sure that happens a lot.) I think abortion helps women better care for the children they have. I think some people trying to stop abortion are doing it because they believe the fetus is a baby, and their hearts are breaking for them, and I think some of them are patriarchal panty-sniffing sheet-inspecting moral monsters. If you don't believe in birth control at all? Yeah, that last one is you.

A week or two ago, on Twitter, a friend stated emphatically you can't be pro-life and a Democrat. While I do as she says in most things -- generally a good rule to live by! -- she can tell it to my mom. If my mother's not a Democrat, she'll be happy to know she can keep her Saturdays free again. No more spending her weekends holding up Yellow Dog Democrat signs on the corner of Shawnee's biggest intersection, Farrell and Beard. She won't have to make all those calls for the Pott County Democrats meeting. She won't have to serve on the platform committee so Oklahoma Democrats know they are for gay rights and Obamacare and marijuana and all God's other good things.

My mother didn't stop being pro-life when we both stopped believing in God. She even thinks the little girl in Brazil, forced to bear her stepdad's child at the age of 11, won't suffer too much harm from it. Does my mother go and God-bother Planned Parenthood? Hell no, they cured her teen daughter's chlamydia. Does she vote for Jim Lankford or other deeply evil people, so she can save a baby? Of course not, they're bad. As a pro-life Democrat, she may be a statistical outlier, but she believes in feeding that baby even after it's born. She believes in making its mom's life better, not screaming at her that she's a "taker" and a whore. The vast majority of her convictions are served better by the Democrats than the GOP, and so she disagrees with them on This One Thing.

Hillary Clinton said person instead of fetus. She said you can be pro-life and still be a feminist.

And Hillary Clinton -- fighting for decades to make abortion "safe, legal and rare" and boy, that pissed people off too -- is right.