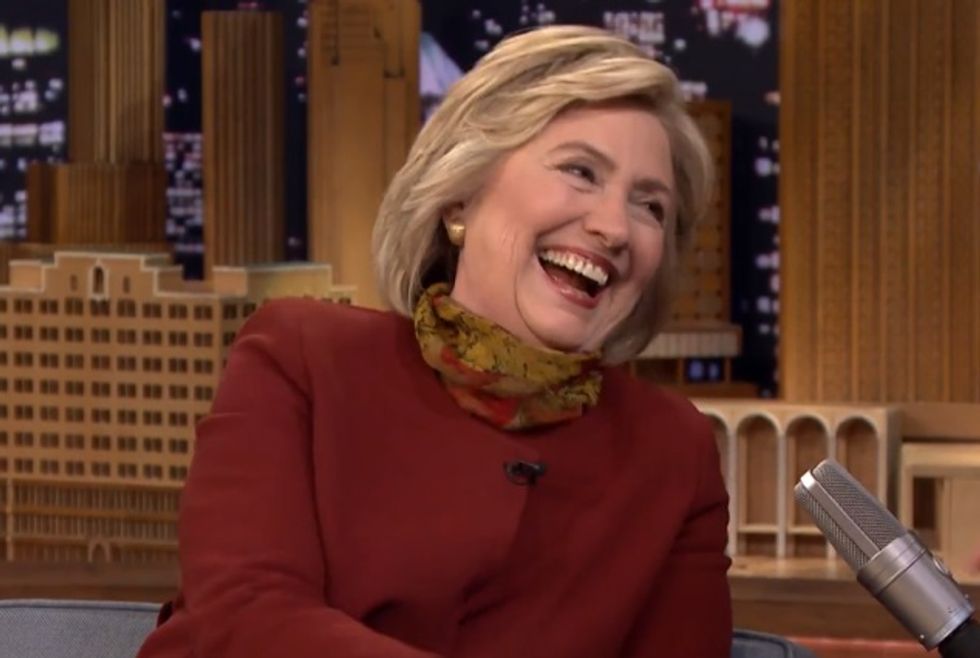 Yesterday, we all enjoyed ourselves watching Hillary Clinton sit on a stage with Christiane Amanpour and talk about life, the universe, and how "her opponent" (she meant Donald Trump) is a dumb lunatic who can get effed.

The media lost its shiiiitttt. New York Times writers took a break from penning articles about how she didn't get the proper permits for her kitchen (no, really, that's real) to go on Twitter and howl that she wouldn't "take personal responsibility" for being a losing loser who loses because she noted (correctly) that the Comey letter took her from "going to win" to "oh fuck."

She reportedly apologized to President Obama on Election Night, according to Shattered. She apologized to all of us the next morning.

But none of those apologies are enough for the Daily News's Gersh Kuntzman, who gets paid to write like the worst, nastiest diarrhea-mouthed rantings of the New York Post. Here is how he begins.

Hey, Hillary Clinton, shut the f--- up and go away already.

Sometimes my mom points out to me that Bernie Sanders -- who is not a private citizen but an elected official representing Vermont -- is out there fighting. Why isn't Hillary? she asks me. I point out that she's given many speeches the media hasn't covered -- the same media that complained she wasn't talking about economic policy but then kept cutting away from her economic policy speeches to show footage of Donald Trump's empty lectern, the same media that now is telling her to shut the "f--- up" and "go away."

Let's copy and paste some more of this fine fellow, who you wouldn't at all fear would start screaming like an unhinged lunatic right in your face:

I voted for Clinton on Nov. 8 and thought she’d be a good president.

But she lost. And she still wants us to feel bad about that. And, worse, she’s still blaming everyone else.

On Tuesday at the Women for Women conference, she reminded us again what a flawed candidate she was last year — and what a flawed person she has always been.

In her talk before a friendly audience, Clinton said she’s writing a memoir — and said it’s “painful” to revisit how Donald Trump beat her like a ragdoll in an election that was a lock.

How dare Hillary Clinton have the same human emotions as the rest of us? How dare she have feelings about people telling her every single day that nobody likes her (except for 69 million people), everybody hates her, she's a crook and a prostitute and she needs to die. What a fucking monster to have feelings about that.

She also said she would discuss the mistakes she made during the campaign — then declined to mention even one. Instead, she fell back on the usual suspects: The Russians and FBI Director James Comey, who indeed meddled in the election at the last minute.

“If the election had been on Oct. 27, I would be your President,” she said.

This is ... true? Like, fairly undeniably true? But it is math, and facts, and Yelly Rage Man is having none of THAT, because he is roiling with hysteria and needs to have his womb chopped out.

Sorry, Simon & Schuster may want Hillary Clinton to write the history, but I’m not about to let her re-write it.

Gersh Kuntzman, macho hero, knows what the real issue of the day is, and it is tackling Hillary Clinton to the ground and preemptively yelling at her that her memoir IS WRONG.

Macho hero, has many novels.

No one deserves more blame for the election debacle than Hillary Rodham Clinton.

Let us count the ways:

1. She was, indeed, untrustworthy: Remember her fainting spell at the 9/11 ceremony?

And I think that's about enough from Gersh Kuntzman, who goes on to assert some lies of his own, like that she "called half the country a basket of deplorables," which she didn't -- she quite clearly asserted that half of Trump voters were regular people who had different priorities for policy than she did, and half of his voters were frankly deplorable. And the media went along with the libel that she had called all Trumpers -- or even all Republicans -- deplorable, even as the media knew exactly who half of Trump supporters were. They were racist frogs and David Duke and the people who have told you and me and everyone we know we belong in a gas chamber. Hell, she wasn't even talking about your typical garden variety "blacks are lazy" racists! She gave those fuckers the benefit of the doubt!

Kuntzman's other numbered points include:

2. She ran a very poor campaign (this is where he lies about her "deplorable" comment),

4. "Those Goldman-Sachs speeches. You can’t be a prostitute on Wall Street and then go to church on Main Street."

Yeah, he called her "a prostitute."

And now we come to the end, and this funny? self-deprecating? utterly tone-deaf and cringey? UNCLEAR! section:

Does Gersh Kuntzman's editor hate him? I am guessing so, because that is mortifying, and Kuntzman should be mortified. But now we come to the end-end, and it is this:

The American public does not want a book from Hillary Clinton. It wants an abject apology. And it wants it for free. She got what she deserved: She lost.

Now she needs to shut up and go home.

First, Gersh Kuntzman, you don't speak for me OR America about what "the American public" wants, and have you considered seeing someone about your tendency to make sprawling, grandiose pronouncements? Do you order for the table too, regardless of what it would like to eat? You sound like a malignant narcissist.

Second, there's an odd strain of people -- mostly men -- who can't let go of the desire to ritually punish and humiliate Hillary Clinton, even more than they already have. They have many reasons for this, and they are all as poorly stated and transparent as the above.

Nothing disgustingly misogynistic and terrifyingly, spittle-flyingly woman-hating about these men.

Wonkette accepts no advertising and relies solely on the kindness of Readers Like You. Will you help us continue to yell at this dick?