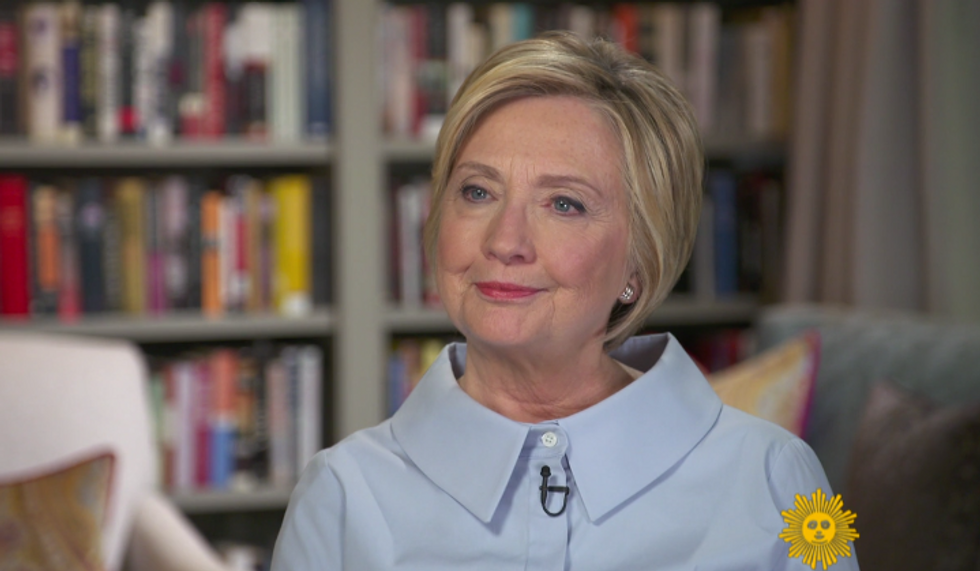 Today is the day! It's the scheduled release date for Hillary Clinton's new book, These Words Will Enrage Certain Weirdos, And It's Entirely Unclear Why, and we're writing about Hillary Clinton again! Yes, we wrote about her yesterday, and this morning, but we're following up either A) just to annoy you, B) because we like her or C) a savory combination of A and B.

For serious, though, Hillz was on the CBS "Sunday Morning" television program this weekend, and she gave a good interview, so we decided to share this bit she said about Bernie Sanders. We know, we're supposed to be harmoniously healing from the primary and never saying a bad thing about Bernie because he is the king of us and people concerned with the future of the Democratic Party shouldn't ever point out that Bernie isn't even a Democrat, or that he's made clear he doesn't give a solitary fuck about the party.

(Obligatory sidenote, for saying something nice about Bernie Sanders: Single-payer healthcare is GREAT! We are glad all kinds of Democratic senators are hopping on the train with him, presenting a united front on an issue that really does unite us, even if maundering hacks like Chris Cillizza and Joe Scarborough never can seem to figure out what Democrats are for. And we are glad for the passion Sanders inspired in lots of people! OK that's enough for now.)

In the clip, Hillary puts her deplorable foot in her mouth by saying the following thing is true, just because it happens to be true:

WHOA WHOA WHOA, HILDEGARD OF BENGHAZI, WHAT ARE YOU SMOKING RIGHT NOW? Isn't it a proven fact that Hillary #RIGGED the primary by getting early endorsements and convincing the base of the Democratic party to like her more, to the point that several million more people voted for her? That is unfair and unkind.

Let's have a full quote:

And that feeds in, I think, to the whole sexism and misogyny part of this campaign. I had large groups of supporters who had to be private because if they lifted their head up online, if they were responding on a YouTube comment chain or on Twitter or something, they were just attacked, and the attacks were so sexist about "well you're supporting a woman because you're a woman!" [...]

I think a lot of what he churned up in the primary campaign was very hurtful in the general election against me. [...] He doesn't disown the things they say about ... some of my favorite Democrats, people like Kamala Harris, who is out there speaking up and speaking out and she's being attacked from the left. Enough!

You know, if you don't want to support Democrats, then go somewhere else, but if you are willing to work with us, we're gonna have disagreements. We're going to be pushing and pulling to get to the right solutions. I've been for universal healthcare coverage my entire adult life. I've worked to achieve it. And we got closer than we ever had with the Affordable Care Act. I was defending it, he wanted to start over. We were at 90% coverage. I thought that was significant.

This is just ... true. Goddammit, Hillary, stop it with your quote-unquote "REALITY." How many times did we hear about people "voting with their vaginas" during the primary? Many. How many times have we pushed back against insane, out-of-left-field attacks on Kamala Harris? HERE and HERE are two examples of that.

During the 2008 Democratic primary, if you were around for that, things got VICIOUS. There was a particularly obnoxious online movement of Hillary supporters called the PUMAs (Party Unity, My Ass -- sound familiar?) and they were GRRR and ARGH and threatening to blow everything up because Hillary Clinton had lost the primary fair and square. She did not put up with that shit from her own people. She showed up, she embraced Barack Obama wholeheartedly, as personally painful as it must have been for her.

(She details this in the early pages of her book Hard Choices, which you can buy along with your copy of What Happened, if you haven't yet done so!)

If you dive into the numbers, it actually seems that fewer Sanders supporters rejected Hillary than Hillary supporters rejected Obama in 2008. (Like we said, that primary was BRUTAL. It also should give us hope for <insert platitude here about time healing all wounds>.) So that's good!

But how nice would it have been if Bernie Sanders had really fought for Hillary Clinton? How much could he have helped prevent the little situation we're in right now where, despite Hillary winning the popular vote by millions, 77,000 voters in the Rust Belt were able to hand the election to Donald Trump? We are just saying.

Candidates and politicians have a lot of power to move their supporters. This is why we constantly demand Donald Trump disavow his white supremacist Nazi adorers. How much difference would it make, now, if Bernie stood next to his colleague Kamala Harris, in a mutual display of "Knock that shit off, assholes"? We are just asking questions.

In other terrible Hillary news, she told USA Today that she's "convinced" the Trump campaign colluded with Russia in some way to win, which is also obviously true, but GOD, HILLARY, WHY CAN'T YOU JUST ADMIT YOU LOST BECAUSE YOU'RE SHRILL AND UNLIKABLE AND A FAKE CRIER AND PROBABLY HAVE PNEUMONIA AT ALL TIMES?