Hillary Clinton Did A Press Conference, Which Is Impossible Because She Doesn't Do Those 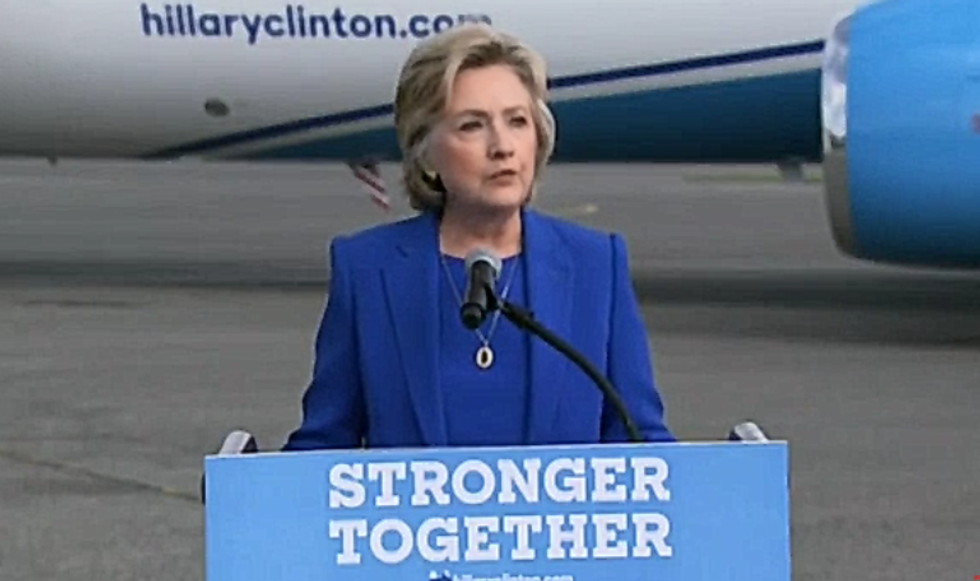 Your next president, Hillary Clinton, apparently has been hearing the weeping and gnashing of teeth coming from the national media about how BOO HOO she never talks to them and BOO HOO the national press corps needs to be babied at all times, so she decided to do a press conference Thursday morning in front of her great big airplane. It was great! She came out 27 minutes late, which shows she's ready on Day One to be presidential as fuck, by making us wait on her. C'mon, Hillz, we got places to be!

Hillary said she is bringing together a bipartisan group of experts (a better one than Trump's group of "experts") to "discuss how to intensify our efforts to defeat ISIS" and kill its leader dead, the same way she and Obama did with Osama bin Laden. She also said Trump totally sucked in Wednesday night's Commander-In-Chief Forum:

Last night was yet another test, and Donald Trump failed yet again. We saw more evidence that he is temperamentally unfit and totally unqualified to be commander in chief. He trash-talked American generals, saying they've been quote "reduced to rubble." He suggested he would fire them and replace them with his hand-picked generals. He attacked dozens of former flag officers, by saying that quote, "We've been losing for us for a long time."

He praised Russia's strongman, Vladimir Putin, even taking the astonishing step of saying he prefers the Russian president to our American president.

She called that "unpatriotic and insulting" to the American people, but also "scary." She asked, "What would Ronald Reagan say about a Republican nominee who attacks America's generals and heaps praise on Russia's president? I think we know the answer." Ronald Reagan probably wouldn't be a big fan of a dude who is quivering with unrequited love for the leader of Russia, we don't think!

She also made fun of Trump's statements that he is going to take our enemies' oil back to America, because HOW DO YOU EVEN DO THAT? Do you put it in one million airplanes? Do you hook up a hose and pull it all the way back to US America with you? Hillary said Trump doesn't know, because he hasn't thought it through.

After a few more words about how to defeat ISIS and whatnot, it was time for QUESTIONS! From real reporters! Here are some highlights, paraphrased, because Wonket versions of reporter questions are way funnier:

Hey Hillary, why are you only 2.8 points ahead according to Real Clear Politics if Trump sucks so bad?

Hillary said, "I've always thought this was going to be a close election," and that she takes nothing for granted and will just keep working hard to tie this thing up with a bow.

Hey Hillary, the RNC says you didn't smile enough last night. Is that because SEXISMS???? Are you treated differently because you are a lady? Does everybody do SEXISMS to you all the time?

Hillary sort of already answered this question, on Twitter:

In Thursday morning's press conference, Hillary said, "I don't take my advice or take seriously anything that comes from the RNC," and that she would let people figure out by themselves if they are sexism-ing her. She also added this HILARIOUS ZINGER about smiles:

Donald Trump chose to talk about his deep admiration and support for Vladimir Putin. Maybe he did it with a smile, and I guess the RNC would have liked that!

Hey Hillary, what was up with Trump gossiping about all the things he learned during his intelligence briefings? Like WTF?

Hillary called that "inappropriate and undisciplined" and added, "I would never comment on any aspect of any intelligence briefing I received." CLEARLY.

Toward the end, Hillary said she's happy to see articles coming out pointing out differences between coverage of her campaign and Trump's, but that's just how it is, so she will keep on keepin' on.

After a few more comments, it was time to go bye-bye on airplane, to North Carolina! Now all the dingbats who have calendars tracking how long it's been since Hillary gave a press conference will have to set their clocks back to ZERO DAYS, unless this presser doesn't count for some reason, like maybe she was wearing the wrong color or didn't bring cupcakes for the snowflake national press corps.

Here, watch the video while you eat your brunch!