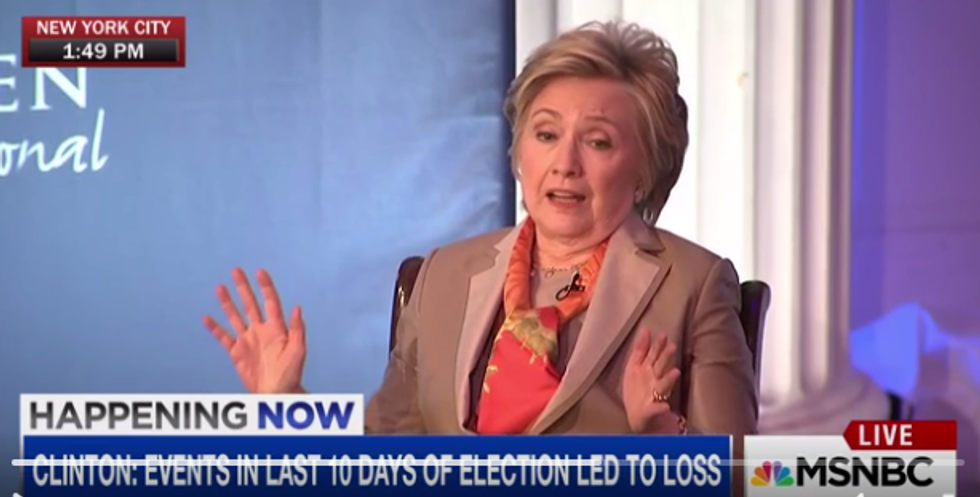 Hello, Donald. How are you doing today?

Hillary Clinton was interviewed by Christiane Amanpour on Tuesday at a luncheon for Women For Women International, and while this wasn't the FIRST time she's emerged from the woods to say peek-a-boo to the American public, it was definitely her most badass outing so far. She made some news in the back-and-forth, like for instance she is writing a book that will be out in September, about how she "lost" the election to Donald Trump. She addressed why she "lost," and in the process managed to throw approximately one metric lady fuckton of shade at Trump, without ever once saying his name.

Now, some might say we are part of the #HillaryClintonCorporateGlobalistFanClub by even writing this post, but that's silly. We are the PRESIDENT of that club and ALSO A CLIENT.

Let's visit with the lady who was supposed to be president before Vladimir Putin and James Comey grabbed the White House by the pussy on Trump's behalf:

Why she lost the election, in her own words!

Clinton: I was on the way to winning until a combination of the Comey letter and WikiLeaks "scared off" voters https://t.co/FS9oAsrIQv

It wasn't a perfect campaign. There is no such thing. But I was on the way to winning, until a combination of Jim Comey's letter on October 28 and Russian WikiLeaks raised doubts in the minds of people who were inclined to vote for me, but got scared off. And the evidence for that intervening event is, I think, compelling, persuasive. And so we overcame a lot in the campaign, we overcame an enormous barrage of negativity, of false equivalency, and so much else, but as Nate Silver, who doesn't work for me -- he's an independent analyst, but one who's considered to be very reliable -- has concluded, if the election had been on October 27, I'd be your president.

Those are just #facts. Everything was going along swimmingly until James Comey, for whatever reason (*cough* ROGUE FBI OFFICE IN NEW YORK *cough*), felt the need to alert Congress that maybe Hillary left a few bundt cake recipes on Anthony Weiner's laptop. Comey announced that it was a big OOPSIE NOTHING TO SEE HERE two days before the election, but the damage was done.

Somebody hold Hillary's beer, because she is not done talking about this yet.

But the reason why I believe we lost were the intervening events in the last ten days. And I think you can see, I was leading in the early vote, I had a very strong -- and not just our polling and data analysis -- but a very strong assessment going across the country about where I was in terms of the necessary votes and electoral votes. And remember I did win more than three million votes [than] my opponent. It's like, REALLY????

OH SHIT DONALD TRUMP IS NOT GOING TO LIKE THAT.

CLINTON: Well, FINE. You know, better that than interfering in foreign affairs, if he wants to tweet about me, I'm happy to be the diversion ...

LOLOLOL did she just say it's better for the current president to get distracted pout-raging at her on Twitter than it is for him to even dip his tiny hands into foreign affairs? Oh shit, she did.

... because we've got lots of other things to worry about. And he should worry less about the election, and my winning the popular vote ...

... than doing some other things that would be important for the country.

OH AND ALSO THERE WAS THAT RUSSIA THING, which was done by Vladimir Putin, who hates Hillary because he is a pussy and she was mean to him one time.

Hillary Clinton: Putin "certainly interfered in our election ... to hurt me and to help my opponent" https://t.co/oqJqDsKlvO

He certainly interfered in our election. And it was clear he interfered to hurt me and help my opponent. And if you chart my opponent and his campaign's statements, they quite coordinated with the goals that that leader who shall remain nameless had. So yeah, look. I think Russia is a great country. And I think the Russian people are extraordinarily talented. And I think they are badly governed. And I think they have been denied their opportunities to really join the modern world in a way that will lift them all up. And I also think that when their president came back, after having taken a time-out to be prime minister, he rigged the elections for the parliament, and I was your secretary of State, and we do speak out about rigged elections. That kinda goes with the territory.

At least it did prior to this administration.

Christine Amanpour asked Hillary if misogyny played a role in her loss and Hillary made a face like OH HUMMMMM I DUNNO and everybody laughed.

Hillary Clinton: “Yes, I do think [misogyny] played a role” in the 2016 election https://t.co/f9vXuVKGFEhttps://t.co/ivzkAWt0P9

Hillary noted in the discussion that, for real, of course she made mistakes, and you can read her "confession" and her "absolution" in her book, when it comes out!

(Her mistake: She didn't go to the Rust Belt enough. That's the mistake.)

The part where she says she is "back to being an activist citizen and part of the #RESISTANCE."

Ayup, that's exactly what she said:

“I’m now back to being an activist citizen and part of the resistance,” @HillaryClinton says pic.twitter.com/V8s7ZEN5wR

Hillary says you actually can't solve North Korea on Twitter early in the morning, while wearing your bathrobe.

Hillary Clinton at women’s conference: Negotiations are “not just thrown out on a tweet some morning” https://t.co/2a6sKFYhDw

America, this could have been your president.

After Hillary's interview, pundits on the MSNBC talked about how she's just SO BREEZY and HILARIOUS now that she's not an email harpy trying to be a lady president, and the authors of Shattered, that opportunistic book about how Hillary is just a giant fuck-up for losing three states by a few thousand votes and only winning the popular vote by three million, were of course on television like, "Whatever, Hillary sux, please buy our dumb book."

Fuck that noise. The election is over, but if Hillary Clinton decides to come out and dunk on Trump like this from time to time, we are just fine with that. Hell, give her a morning show and let her do it on the daily.

Donald Trump would lose. his. fucking. mind. (What's left of it, anyway, ALLEGEDLY.)