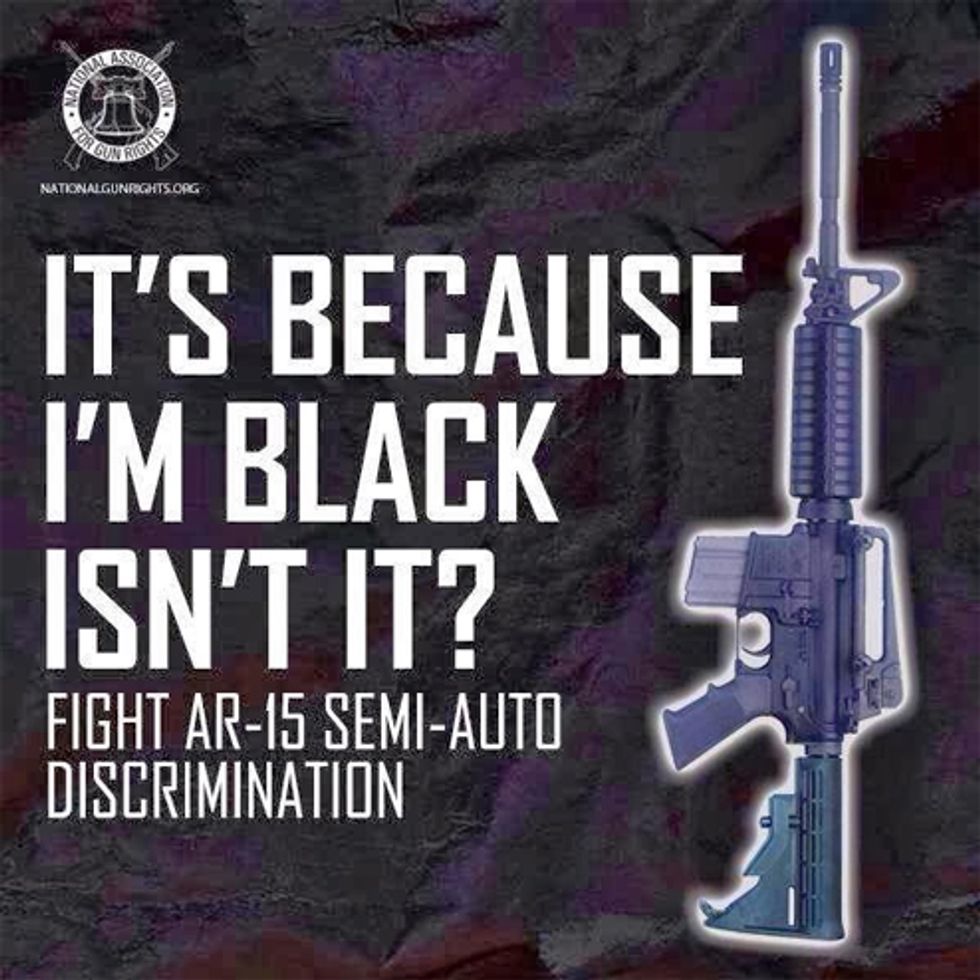 Haw Haw, why are you racist against long guns? You just jealous?

Following the massacre in Orlando, Hillary Clinton has repeated her call for a reinstatement of a federal ban on semiautomatic assault rifles, a category of weapon that many gun humpers insist doesn't even exist. And if they don't exist, or if Washington Politicians are inaccurate in their definitions of particular weapons, then the only reasonable approach is to not change anything and encourage more people to buy more guns, so we can shoot all the bad guys, pew pew pew! In comments on CNN Monday morning,

the presumptive presidential nominee for the Democratic party issued a call for a return to “commonsense gun safety reform” and lambasted the Republican-controlled Congress for what she called a “totally incomprehensible” refusal to address the country’s lax gun laws.

“We can’t fall into the trap set up by the gun lobby that says if you cannot stop every shooting you shouldn’t try to stop any,” she said.

Clinton has long advocated for a ban on assault-style weapons and limitations on the number of rounds that can be held in a single magazine. While in the Senate, she co-sponsored legislation to reinstate and extend the assault weapons ban that was put into place as part of the 1994 Crime Bill, and which expired when George W. Bush refused to renew it in 2004. Despite the nonexistence of such weapons (we'll get to that in a moment), Clinton called for limitations on their continued manufacture and sale:

Rattling off all the ways that Florida allows the proliferation of guns -- the state doesn’t regulate assault weapons or large-capacity magazines, doesn’t require a permit to buy a gun or oblige owners of weapons to be licensed -- she said: “That’s a lot of ‘nots’. I believe strongly that commonsense gun safety reform across our country would make a difference. We know the gunman used a weapon of war to shoot down at least 50 innocent Americans.”

We will now prepare for the inevitable ragegasm of gun fondlers insisting that "assault weapons" can't be banned because there's no such thing, and that any attempt to restrict the kinds of semiautomatic rifles that are commonly called "assault weapons" are unconstitutional anyway and must be resisted lest Americans lose the only thing preventing the imposition of tyranny. Let's try to sort out a little bit of the linguistic and technical dumbfuckery at work here!

If you want to be strictly accurate, the only weapon that should ever be called an "assault rifle" is a military weapon that can switch between semiautomatic and fully automatic modes:

It’s a small yet simultaneously big distinction. Firearms for use by the military are able to shoot continuously with one pull of the trigger, machine-gun style. Civilian firearms, on the other hand, only allow one shot per trigger pull.

To prevent overuse of ammunition, many military assault rifles also include a mode that fires a three-round burst with each trigger pull. Fully automatic weapons -- true "machine guns" -- are not generally available to civilians unless they have a special federal firearms license or are a licensed federal firearms dealer.

Therefore, say your gun humpers, there's no need to regulate assault rifles, since most civilian gun owners don't even have them, and also stop calling that magazine a clip, you are dumb, know absolutely nothing about guns, and because of your inaccurate terminology are therefore incapable of even having an opinion.

Nine times out of 10 they'll then go on to explain how Hitler got his start by banning private firearms, and while that's not remotely true, it does not invalidate their ability to rationally discuss guns, because shut up, you called that gun an AR-15 when it wasn't even MANUFACTURED by Armalite, and "AR" stands for "Armalite" not "Assault Rifle" and shut up. Or if you want to get to the nitty of the argument, you cannot call anything an assault rifle just because it looks scary to you:

Many civilians have purchased semiautomatic-only rifles that look like military assault rifles. These civilian rifles are, unlike actual assault rifles, incapable of automatic fire.

So what about banning semiautomatic rifles that can still fire an incredible number of rounds, except that you have to pull the trigger one time for each round? Ah, well, as the gun humpers delighted in pointing out while the 1994 ban was in place, the only weapons affected by that ban were semiauto rifles that looked like military weapons because they had various combinations of pistol grips, folding or extending stocks, flash suppressors, and high-capacity magazines, while semiauto rifles with similar rates of fire and smaller magazines were unaffected, therefore you loony gun haters are merely afraid of scary guns you don't like. (As to the preference of gun humpers for the most badass-looking semiauto rifles, shut up. Nobody's going to take you seriously at militia meetings if you aren't carrying something that looks like a military weapon.)

Let's not talk about restrictions on magazine size, either, even though several mass shootings have been stopped when a shooter was tackled (or their gun jammed) while switching out magazines. Finally, since no law can ever stop all crimes, let's also just stop having laws.

There's also the more serious question of whether, even if Hillary Clinton were elected, along with a majority in both the House and Senate who'd be willing to risk being utterly destroyed by the NRA in a future election (we're already into fictional territory here, no?), a 1994-style ban on "assault weapons," however defined, would hold up in the courts.

In the 2008 District of Columbia v Heller decision, the court held, 5-4, that the Second Amendment guarantees an individual right to own firearms. So wouldn't that wipe out any restrictions on "assault weapons"? Probably not. In Heller, the Court specifically acknowledged that the federal government could keep in place existing laws restricting ownership of sawed-off shotguns or fully automatic weapons, and in 2015, even while Antonin Scalia still hadn't been assassinated by Hillary Clinton's death squads, the Supremes refused to hear a case challenging a ban on semiautomatic assault-style rifles and high-capacity magazines in Highland Park, Illinois. That decision, however, wasn't absolute, as the New York Times noted in December:

The decision not to hear the case has no precedential force, but was nonetheless part of a series of signals from the Supreme Court giving at least tacit approval to even quite strict gun control laws in states and localities that choose to enact them.

“The justices don’t reveal their reasons for denying review, but one thing is clear,” said Adam Winkler, a law professor at the University of California, Los Angeles. “The justices certainly aren’t eager to take up a Second Amendment case these days.”

“One has to wonder,” he said, “if the Supreme Court is having second thoughts about the Second Amendment.”

We'd also note that, just days before the horror in Orlando, the 9th Circuit Court of Appeals held that California permits for concealed carry can be restricted without violating Heller. In essence, the appeals court held there's no inherent right to concealed carry in public. That decision may still be appealed to the Supreme Court.

Hmm. It's almost as if there's a hell of a lot riding on the coming election and who will be selecting new justices for the Supreme Court. Meh, there's not a dime's worth of difference between the two parties, they're both corrupt, may as well stay home.

Now, everybody get to arguments about firearms terminology in the comments, which we don't allow.