Hillary Clinton Is Not Giving Up, And Neither Are You 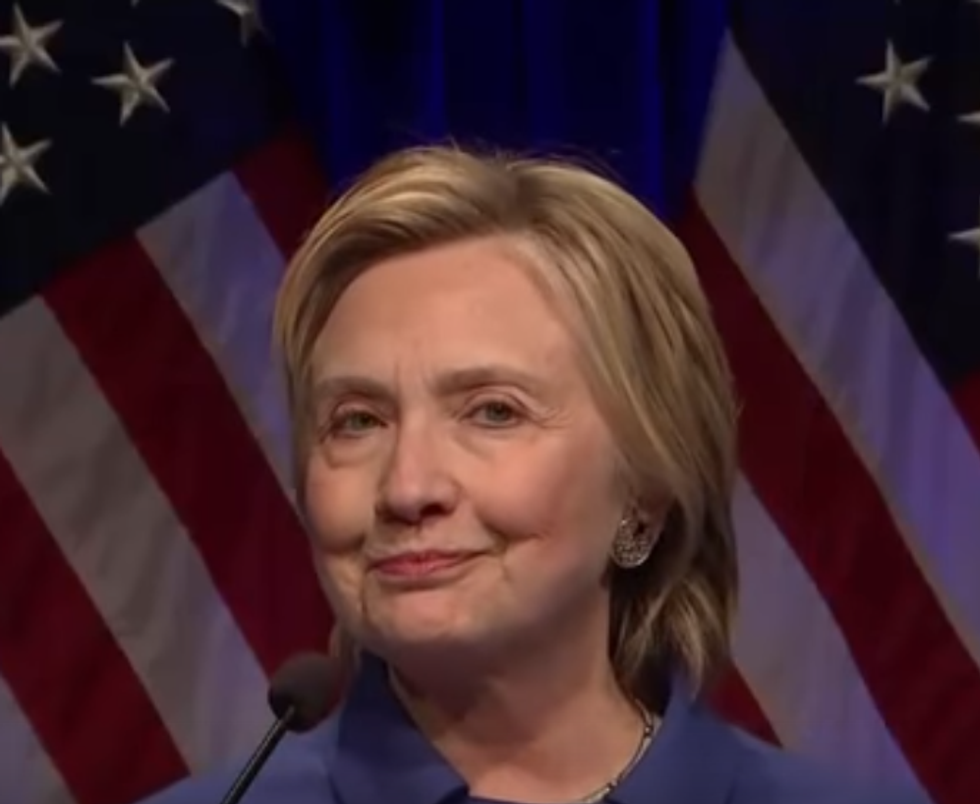 Still want to hug her.

Would you like to start your morning with a little bit of weeping and sadness for what could have been, before the fateful day of 11/9 stomped American freedom and democracy into the ground? And then, after a cry, would you like to commit to yourself and America that you will stay and fight to preserve our great country? Well, you are in luck! Last night, Hillary Clinton made her first appearance since she conceded the election, at a gala for the Children's Defense Fund, where she worked so many moons ago, and it was good and lovely and hopeful and sad and basically just the fucking best.

You will have video time with us right now? Yes, you will!

Hillary began by congratulating kids who won Children's Defense Fund awards, and you can see in her eyes just how much she genuinely cares about them. Fighting for children, after all, has been the cause of her entire life, and she's not going to stop.

She did admit that the last week blew ass, though:

I will admit coming here tonight wasn't the easiest thing for me. There have been a few times this past week when all I wanted to do was just to curl up with a good book, or our dogs, and never leave the house again.

US TOO, HILLARY. But no, Hillz says we cannot do that, and says her friend Marian Wright Edelman, founder and president of the Children's Defense Fund, inspires her to get right back up and keep fighting:

I often quote Marian when she says that service is the rent we pay for living. Well, you don't get to stop paying rent just because things don't go your way. I know many of you are deeply disappointed about the results of the election. I am too. More than I ever can express.

To all of us who are sad and dejected and eating shots of whiskey for breakfast, Hillary said, "Don't lose heart. Don't give up on the values we share." She even said America is still the best country in the world, even if we just did a bad, awful thing. Here's another nice quote:

For the sake of our children and our families and our country, I ask you to stay engaged. Stay engaged on every level. We need you. America needs you, your energy, your ambition, your talent. That's how we get through this. That's how we help to make our contributions to bend the arc of the moral universe towards justice.

I know this isn't easy. I know that over the last week a lot of people have asked themselves whether America is the country we thought it was. The divisions laid bare by this election run deep. But please listen to me when I say this. America is worth it. Our children are worth it. Believe in our country, fight for our values, and never, ever give up.

OK. As soon as we stop crying, NO SHUT UP YOU'RE CRYING.

Hillary ended her speech by telling a story about her mom being sent away on a train when she was only eight years old, put in charge of her five-year-old sister, facing an unknown scary world. She told us what she wishes she could say to the 8-year-old version of her own mom:

Sometimes I think about her on that train. I wish I could walk down the aisle and find the little wooden seats where she sat holding tight to her younger sister, all alone and terrified. She doesn't yet know how much more she will have to face and even suffer. She doesn't yet know she will find the strength to escape that suffering. That's still years off. Her whole future is unknown, as it is for all of us, as she stares out at the vast country moving past her.

And I dream of going up to her and sitting next to her and taking her in my arms and saying, "Look. Look at me. And listen. You will survive. You will have a family of your own. Three children. And as hard as it might be to imagine, your daughter will grow up to be a United States Senator, represent our country as Secretary of State, and win more than 62 million votes for President of the United States."

THAT'S RIGHT, WHICH IS APPROXIMATELY A ZILLION MORE VOTES THAN THE ORANGE FUCKFACE GOT, GRRRRRRRRRRR! Ahem.

We have no dick jokes to make in this post, because we're too busy wiping a few more tears away and then actively choosing to believe Hillary Clinton when she says we're going to be OK, because we're going to MAKE DAMN SURE OF IT. Hillary isn't going anywhere, and neither are we, and neither is America. We believe her, or at least we're going to fake like we believe her until we actually do believe her, and we'll get through these turbulent waters together, in one piece, and we will be fabulous, and we will have really good hair the whole time.