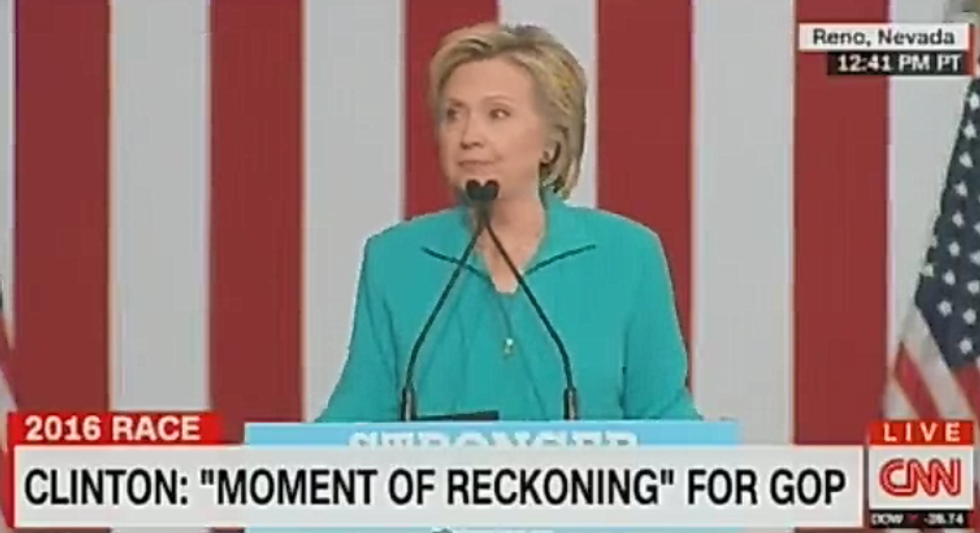 As promised, Hillary Clinton took the stage in Reno Thursday afternoon to discuss the "prejudice and paranoia" that motivates Donald Trump, and to tell America about the bigoted pantshitters known as the "alt-right," whom Trump has squeezed up beside in a gesture of True Love, and whom he is currently giving a reach-around of epic proportions, ALLEGEDLY.

Hillary said she WANTED to talk about small businesses today, but instead, people have been telling her they're worried about the "divisive rhetoric" coming from Trump. So yeah, let's discuss that, and Trump's racism, his ties with white supremacists, "alt-right" extremists, right-wing nationalists, Vladimir Fucking Putin and Dead Breitbart.

Watch it right here, and below, we will analyze it, with dick jokes!

First of all, you need to know that she READ BREITBART HEADLINES ON THE STAGE. Wonkette has written about Breitbart headlines, but usually presidential candidates don't read from their ObamaPads while they're doing stump speeches like "Yo how fucked up is this shit, right?" But Hillary did!

[wonkbar]<a href="http://wonkette.com/605625/donald-trumps-new-daddy-turned-dead-breitbart-into-most-delightful-bigoted-shthole-on-internet"></a>[/wonkbar]Discussing Trump's hire of Breitbart baby-daddy Stephen Bannon, Hillary quipped that Trump has "had to fire so many campaign managers, it's like an episode from 'The Apprentice'!" GOOD ZINGER, HILLZ! She also taught America about the pathetic movement Bannon represents, known as the "alt-right," saying, "This is not conservatism as we have known it. This is not Republicanism as we have known it." She noted that these assfucks are just your grandfather's racist pals, going by a different name:

Same shit, different day, she is saying. However, she noted that for Bannon, Breitbart and that movement to be officially merged with a Republican presidential campaign is a "landmark achievement" for a segment of the American population we normally associate with tin-foil hats and meth. (You know that when it's not in quotes, it's Wonkette's jokes and not Hillary's exact words, right?)

Hillary connected the "alt-right" movement to growing racist, nationalist sentiment around the world, and noted that Vladimir Putin is the "grandfather" of this movement. Drawing a direct line to Trump, she noted that he "heaps praise on Putin and praises pro-Russian policies" like abandoning NATO. Somebody should tell Trump he's running for president of AMERICA, not Russia!

The part where Hillary talked about all the wacky-ass conspiracy theories Trump believes, because he is an unhinged moron

The best thing you need to know about this part is that Hillz directly slung shit at Donald Trump's pal, the conspiracy theorist Alex Jones. It was WONDERFUL. She rattled off a litany of horseshit Jones believes -- that 9/11 and Oklahoma City were inside jobs, and that the Sandy Hook victims were child actors and nobody was actually killed that day. And she pointed out that "Trump doesn't challenge those lies," and that he actually said to Jones that he Would Not Let Him Down.

And really, they are two peas in a pod, because Hillary talked about Trump's own conspiracy theorist beliefs, like how he was one of the primary promoters of the birther movement, and also the time Trump accused Ted Cruz's dad of helping murder John F. Kennedy. Hillary comin' atcha with another zinger:

This is what happens when you treat the National Enquirer like gospel.

[wonkbar]<a href="http://wonkette.com/605279/what-is-hillary-clinton-dying-from-today"></a>[/wonkbar]Anyway, Hillary's obvious favorite out of all of Trump's conspiracy theory beliefs is the one about how she is sick and dying right now, saying his latest "paranoid fever dream is about my health! All I can say, Donald, is DREAM ON." LOLOL! She clearly enjoyed delivering that line.

In conclusion, Hillary said that a man like Trump, who "traffics in dark conspiracy theories drawn from supermarket tabloids and the far, dark reaches of the internet, should never run our country or command our military." We don't think that was meant to be a #zinger, but more like the fucking truth.

Early in her speech, Hillary talked about Trump's fake "outreach" to black Americans, saying, "It really does take a lot of nerve to ask people's he's ignored and mistreated for decades, 'What do you have to lose,' because the answer is 'EVERYTHING.'" For decades, you say? Why yes! She cited Trump's long history of racism in his business dealings -- the time so long ago when he was sued by the Justice Department for refusing to rent to African-Americans, and the time one of his casinos was fined for repeatedly removing black dealers from the floor. Oh, and the thing about the Mexican judge and calling Mexican immigrants a bunch of rapists, those got a mention too.

Hillary encouraged people not to pay attention to Trump's pathetic "pivoting" of late, reminding folks that people are whispering in his ear right now about what to say. She said some people out there are hoping a "kinder, gentler Donald Trump [is] waiting in the wings," and that some hope that "cooler heads" might prevail "when a tweet gets under his skin and he wants to retaliate with a cruise missile." (ANOTHER ZINGER!) But, sadly and LOL, that is not going to happen, Hillary is sorry to report:

There is no other Donald Trump. This is it. And Maya Angelou ... once said, when someone shows you who they are, believe them the first time.

At the closing of her speech, Hillary quoted a Spanish proverb, "Tell me with whom you walk, and I will tell you who you are," and added that "A few words on a teleprompter won't change that." We know who Trump walks with, and we know who he is, was Hillary's fucking point.

Trump has already reviewed the speech, on Twitter. Let's see how much damage Hillary did:

Trump's tiny baby hands must be so sweaty right now, out of clammy, weak fear! Oh well, maybe he can dry them off on one of his authentic Trump Tower taco shells, we do not goddamn care.

GOOD SPEECH, HILLZ, KEEP IT UP!