You know that dumb stereotype about how Hillary Clinton doesn't know how to have fun and be silly? We would simply like to point out that it's cacadoody. Yes, yes, sometimes she falls into the "cautious-n-controlled" stereotype, especially when people are gunning for her for the stupidest possible reasons (remember Cookiegate, for godssake?). But Hillary's often happy to take off those formal shades: not merely rolling her eyes during Trey Gowdy's Benghazi Circus, but laughing out loud at some of the stupider questions. Or being just as thrilled to meet a little Hillary fan as the girl was to meet her: 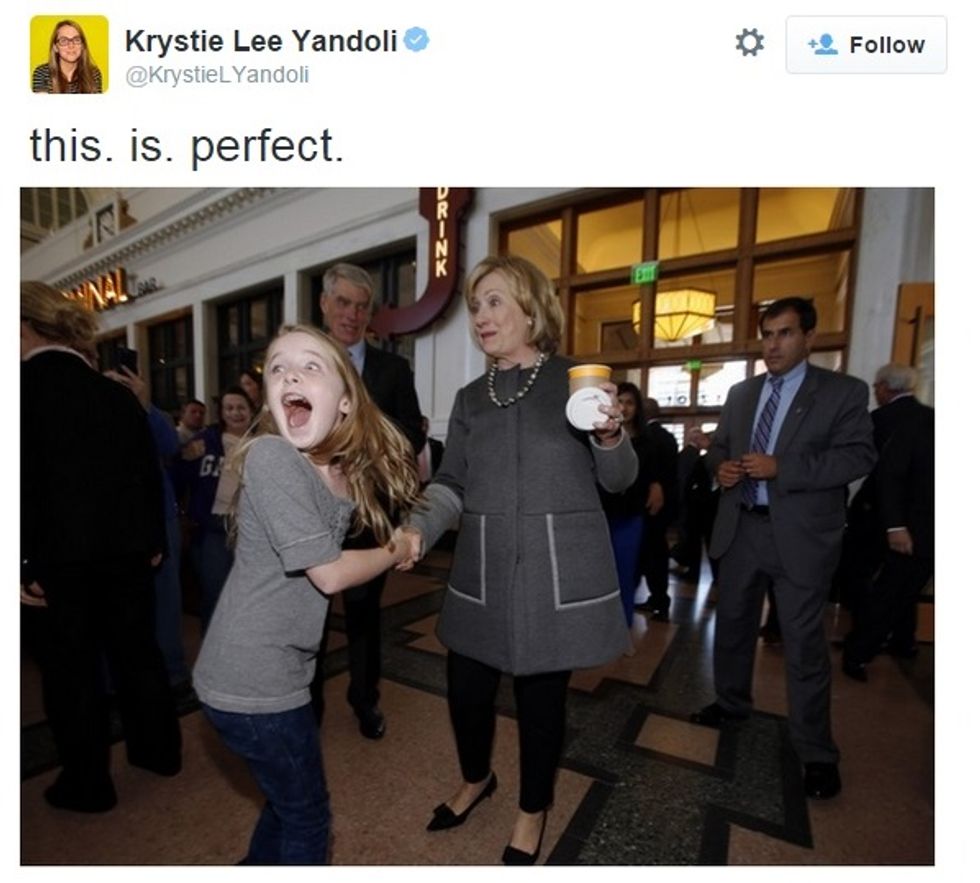 Hillz was in Open Fun Mode Monday during a campaign stop in Reno, where she digressed a bit from critiquing Republican talking points that aren't quite grounded in reality, and ended up barking like a dog. And the hell with all the jerks who'll remix this into some kind of "Hillary lets out her inner bitch" thing; she's clearly enjoying herself here, and we are fully in favor of candidates making animal noises on the stump. This offer extends even to Ben Carson, who we hear does a mean three-toed sloth.

Republicans...actually, with a straight face, say that the great recession was caused by too much regulation on Wall Street. They actually say that [...]

One of my favorite political ads of all time was a radio ad in rural Arkansas where the announcer said, "Wouldn’t it be great if somebody running for office said something, we could have an immediate reaction to whether it was true or not. Well, we have trained this dog. And the dog, if it's not true, he is going to bark." And the dog was barking on the radio and so, you know, people were barking at each other for days after that.

I want to figure out how we can do that with Republicans. We need to get that dog and follow them around and every time they say these things like, "Oh, the Great Recession was caused by too much regulation": Arf! Arf! Arf! Arf!

You know? I think we could cut right through a lot of their claims.

We also like that little bit at the end where she pauses for a beat as she clearly considered saying "bullshit" instead of "claims."

Needless to say, there is also the inevitable amusing Vine:

Yr Wonkette would like to see this catch on for the rest of the 2016 campaign. Imagine a whole bunch of Democrats sitting together at Republican rallies, barking and howling at every lie. It would be especially appropriate at Donald Trump events, given his weird penchant for comparing everything and everyone to a dog. In his announcement speech, he even criticized Rick Perry for holding his kickoff event in a hot airplane hangar where people were "sweating like dogs," which prompted pet aficionado Rachel Maddow to point out on at least two separate programs that dogs do not sweat.

We also see no reason why this should only be a Hillary thing -- we bet Bernie Sanders could do some pretty impressive woofing himself. If the Republicans are going to keep lying like dogs, we may as well make some noise about it.

Sit The Hell Down Meghan McCain, And Listen To A Fable

Is Trump Cutting Off Michigan's Nose To Spite Their Governor's Face? Probably!

COVID-19 Not A 'Bioweapon' Manufactured In A Lab, But Try Telling The Conspiracy Theorists That