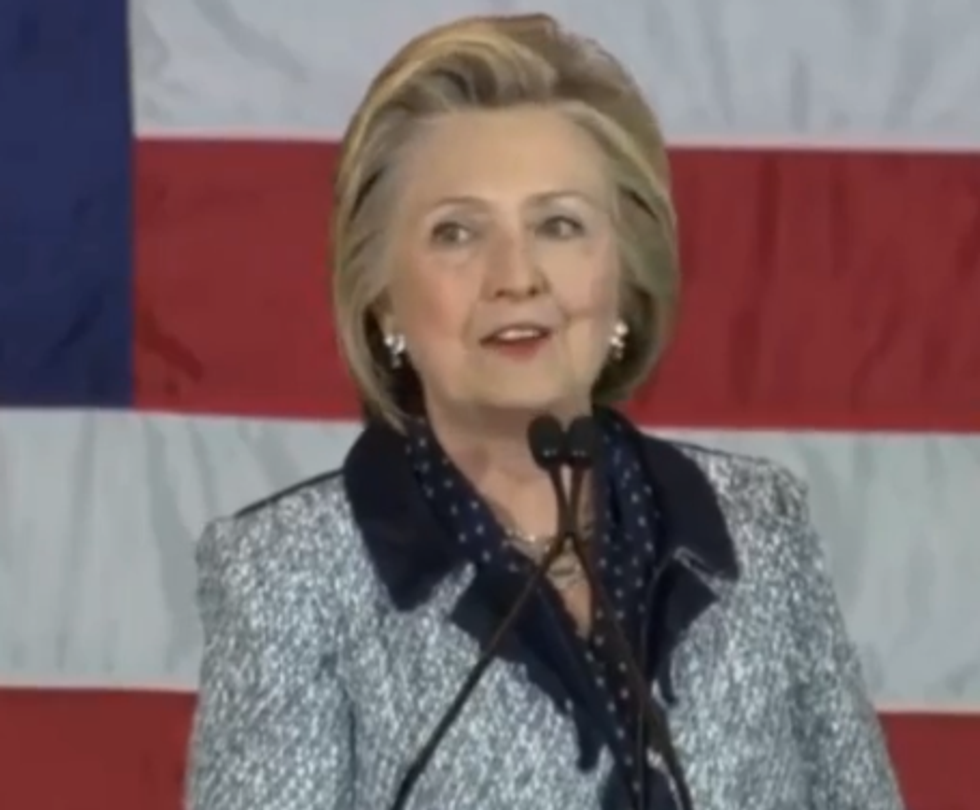 Hillary Clinton is tired of Donald Trump's shit. And yet, the orange, 70-year-old (happy birthday, numbnuts!) dilettante saw fit to give an uproariously stupid speech in response to the mass shooting in Orlando, so she had to react, since the GOP after all did pick him to run against her in November. Didn't she already cover all this horseshit in her big "Donald Trump Is A Temperamentally Unfit Idiot-Ass" foreign policy speech? She sure did, and she'll do it again, and again, and again, as many times as it takes.

Hillary called the Orlando attacks both an act of terrorism AND a hate crime against the LGBT community, which means she already has a leg up on Trump, because she can hold two thoughts in her head at once. Here's the talk, in case you want to go ahead and press play (PRESS PLAY RIGHT NOW):

Donald Trump wants to be our next commander in chief. I think we all know that that is a job that demands a calm, collected and dignified response to these kinds of events. Instead, yesterday morning, just one day after the massacre, he went on TV and suggested that President Obama is on the side of the terrorists. ... Even in a time of divided politics, this is way beyond anything that should be said by anyone running for president of the United States. [...]

What Donald Trump is saying is shameful. It is disrespectful to the people who were killed and wounded and their families. And it is yet more evidence that he is temperamentally unfit and totally unqualified to be commander in chief.

AMEN, HILLARY, YOU KEEP PREACHIN'. Got anything else?

This is a man who claimed a distinguished federal judge born and raised in Indiana can't do his job because of his, quote, "Mexican heritage." I guess he has to be reminded that Indiana is in the United States!

Hillary described how murderously and brutally ISIS behaves toward women, toward LGBT people, and toward any-fucking-body else ISIS doesn't like, and said this:

The barbarity we face from radical jihadists is profound. [...] Now, I read every word of Donald Trump's speech yesterday, and I sifted through all the bizarre rants and outright lies, and what I found, once you cut through the nonsense, is that his plan comes down to two things:

First, he is fixated on the words "Radical Islam." Now, I must say I find this strange. Is Donald Trump suggesting that there are magic words, that once uttered, will stop terrorists from coming after us?

From my perspective, it matters what we do and not just what we say. In the end it didn't matter what we called bin Laden, it mattered that we got bin Laden.

On Monday, dumb media sources and Donald Trump were all OOH OOH! SHE SAIDED THE WORDS! Then, as now, her point was that if you motherfucking dong-puddles are obsessed with those words, then FINE. She'll call it Radical Islamic Terrorism, she'll call it Betsy Boobybottoms, she'll call it YOOGE TREMENDOUS TERRORISM if Donald Trump wants her to, and the fact remains that she'll do far more to stop it than that unhinged man baby ever will. Make sense?

Hillary also explained that her newfound "embrace" of the Magical Muslin Mantra doesn't actually change anything since she "will not demonize and declare war on an entire religion." Sorry, GOP, we know you have a boner for killin' Muslims, but we're having a grown-up discussion and you are not invited.

Hillary added that, since "Say the words!" was one of Trump's major talking points (out of two talking points), and she just vanquished it, poor Donald will have to "come up with something better." She explained in detail the problems with Trump's calls for a ban on Muslims (his second talking point), and pointed out that his rhetoric on this issue is indeed a recruitment tool for groups like ISIS. And oh, by the way, his "idea" wouldn't have done jackdiddly to stop what happened in Orlando:

In this instance, Donald's words are especially nonsensical, because the terrorist who carried out this attack wasn't born in Afghanistan, as Donald Trump said yesterday. He was born in Queens, New York, just like Donald was himself.

She noted that Trump spent much of his speech saying big lies about her. Why does he do that, Hillary?

Because he has to distract us from the fact he has nothing to substantive to say for himself.

Did Hillary say other stuff good too? Yeah she did! Like a thing about how she's gonna GIT YER GUNS, for instance! Just kidding, that's not what she said. She did say that Orlando shooter Omar Mateen is the very definition of a person we should keep from buying fucking arsenals, though. What a goddamned concept:

Let's get this straight. We have reached the point where people cannot board airplanes with full bottles of shampoo, but people being watched by the FBI for suspected terrorist links can buy a gun with no questions asked. That is absurd.

For real, Hillz, for real.

OK, you watch the rest of the speech now, yes? The ending is really good. Like, it might make you cry with whatever part of your face the tears come from, but we won't SPOILER it. And if you don't watch it? THEN YOU'LL NEVER KNOW WHAT HAPPENS.