Hillary Clinton Sorry She Tried To Say Nice Thing About Dead Lady, Won't Do It Again 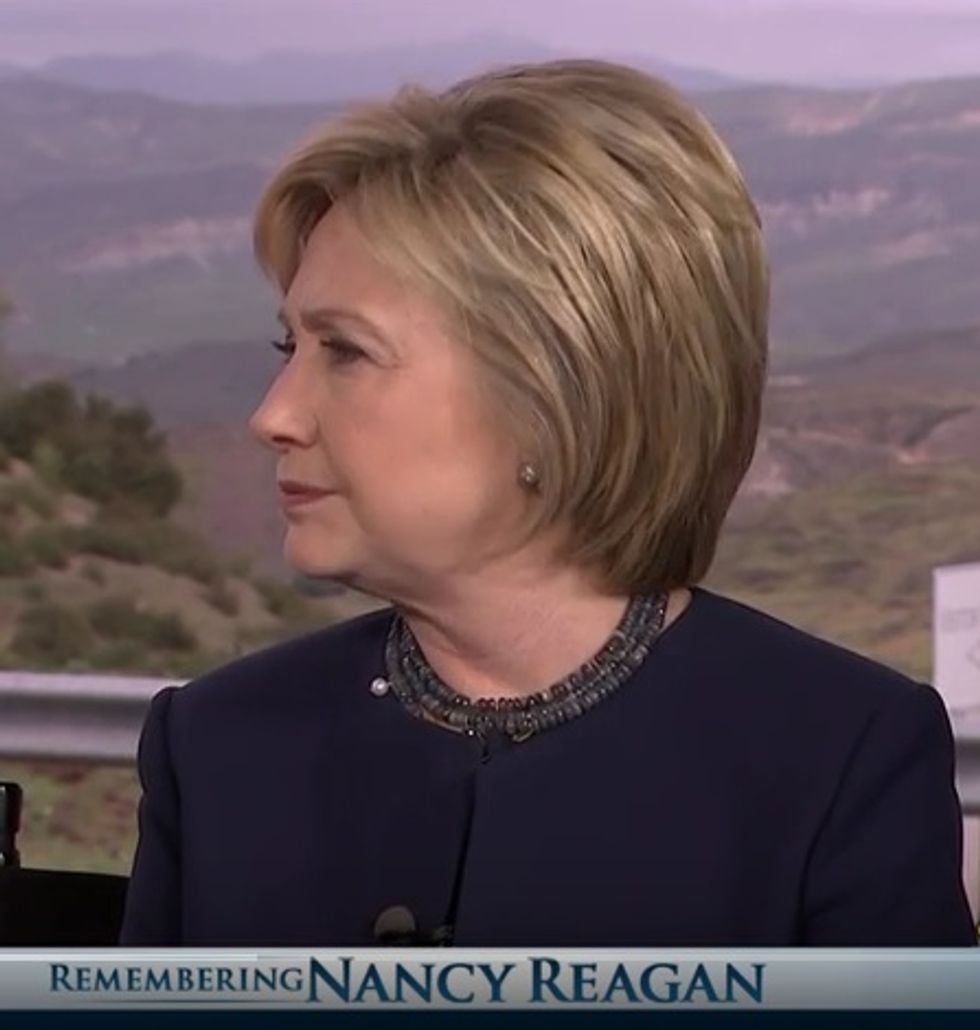 Hillary Clinton went and put her foot in her wherever Friday afternoon, and Twitter had itself a good afternoon of its favorite emotion: aghastness. Then her social media people read her @ mentions and she realized that, in trying to say something nice on teevee about Nancy Reagan, on the day of her funeral, she'd actually said something dead wrong. As it were. After correctly pointing out that Nancy Reagan had advocated for Alzheimer's research -- particularly stem cell research* -- and for the Brady Bill when the GOP orthodoxy was solidly against both, Hillary had to go and add another example, about HIV and AIDS, that could most charitably be described as "not especially close to true":

Because of both President and Mrs. Reagan — in particular Mrs. Reagan — we started a national conversation. When before nobody would talk about it, nobody wanted to do anything about it.

In fact, the statement would only be accurate if Clinton had specified that the national conversation they started was, "Hey, can you believe the Reagans still aren't saying anything about AIDS?"

As we noted in our farewell to Mrs. Reagan, the first time Ronald Reagan mentioned AIDS was in 1985, by which time thousands had died. For entirely too long, the Reagan administration treated AIDS as a joke.

Predictably, the internet blew up, because the very best that could be said of Clinton's comment was "Bless her heart, she meant well." The worst that could be said was that rather than disgustingly peeing on Nancy Reagan's coffin -- which is Wonkette's job -- she'd instead leaked on the coffins of thousands of people who'd died of AIDS while the Reagans did more important things like buy new China. Somewhere in the middle, as Charlie Pierce, Esq. put it, it was "probably the single dumbest thing she's ever said in public." Clinton was at least arguably right that Nancy's part in moving AIDS to some conscious part of Ronald Reagan's brain was "very effective low-key advocacy," if by "low key" you mean "entirely behind the scenes." According to the PBS NewsHour, Nancy and Ron Jr. both pushed the president to increase funding for AIDS research, which he finally did, reluctantly and far too late.

After a short while, Clinton acknowledged that she'd blown it worse than a young Nancy Reagan in a casting director's office, walking back the comments on Twitter:

At least Hillary is learnable, rather than digging in, so there's that. But we all should probably be extremely mad forever anyway.

*Not that we are especially invested in defending the reputation of Nancy Reagan, who is still dead and well beyond being harmed by criticism, we nevertheless feel compelled to push back against what appears to be a myth. We've seen any number of people online claim Nancy Reagan opposed stem cell research before Ronald Reagan was diagnosed with Alzheimer's, and so no one should ever give her credit for her advocacy during the Dubya years. While it's true the Reagan Administration froze embryonic stem cell research in 1988 -- it was then resumed under Bill Clinton in 1993 -- as far as we can tell, Nancy Reagan never said anything on the issue one way or the other until she began pushing for Alzheimer's and stem cell research. In 1994, she said she was "against abortion" but "On the other hand, I believe in a woman's choice," so her views were, to say the least, complex. As the Baltimore Sun noted at the time, it wasn't that surprising a statement; according to former chief of staff Donald Regan, Nancy supposedly once said, "I don't give a damn about the Pro-Lifers," so it strikes us as unlikely she'd have given a damn about the human rights of embryonic cells. Finally, stem cell research was largely a moot point until well after Ronald Reagan's Alzheimer's diagnosis in 1994; the first embryonic stem cells were isolated in 1998, according to the source of all knowledge. But if anyone has a definite citation for Nancy Reagan opposing such research, we're open to being corrected. We like facts that way.

So, your final score: Nancy Reagan on Alzheimer's research and the Brady Bill: Good. Nancy Reagan on AIDS: Better than her husband, which is a pretty low bar. Hillary Clinton on Nancy Reagan: Foot removed from mouth, long-term damage uncertain.