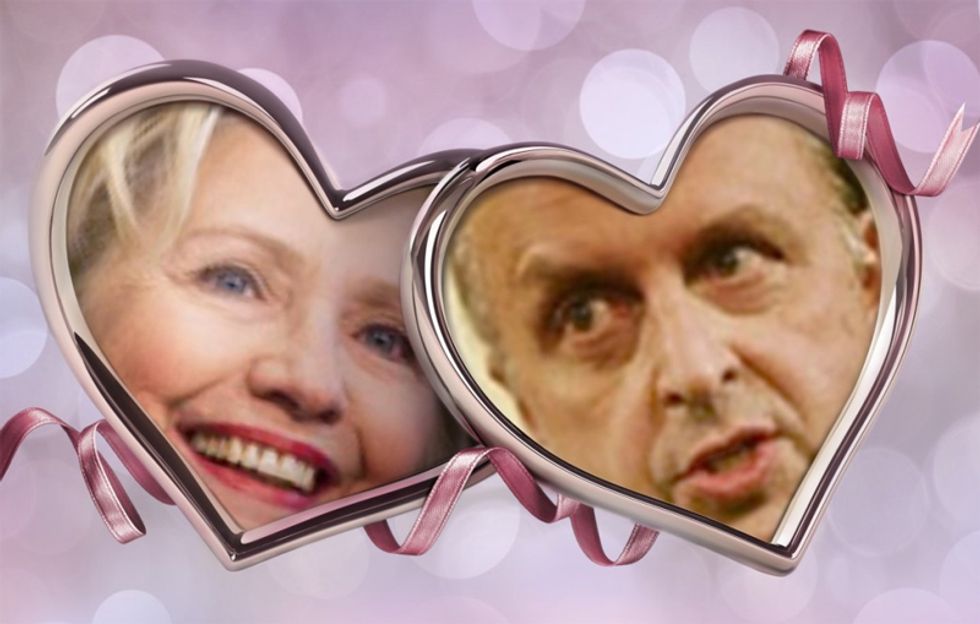 Now see here, Secretary Clinton, we are pleased as anything that a whole bunch of Republican foreign policy experts said Donald Trump is too extreme to be president, but do you really have to go around tongue-kissing every last one of them? Especially the murderous bastard ones, like John Negroponte? We know you're excited to get big foreign policy names, as well as big Republican names to pull over some R's who are sick and tired of the carnival act their party nominated this year... but could you please remember that one of the top rules in politics, as formulated by the great Molly Ivins, is that you gotta dance with the ones who brung you -- and it was Democrats who brung you to the big dance. We'd also prefer you not slow dance with anyone with quite so much blood on his hands, please.

Sigh. Yes, this is where we have to do Intellectual Honesty and say there are definitely sides to Hillary that thrill us not, and this here is one of them. We may as well go right to Fox News for this one:

In a statement provided by the Clinton campaign, Negroponte touted the former secretary of state’s “leadership qualities” in his decision.

“She will bring to the Presidency the skill, experience and wisdom that is needed in a President and Commander in Chief,” he said. “Having myself served in numerous diplomatic and national security positions starting in 1960, I am convinced that Secretary Clinton has the leadership qualities that far and away qualify her best to be our next President.”

As Esquire columnist and Donna Rose's babysitter Charlie Pierce reminds us, plenty of those things Negroponte did while he "served in numerous diplomatic and national security positions starting in 1960" aren't anything Clinton needs to be shaking hands with, let alone embracing:

In the 1980s, he served as the U.S. ambassador to Honduras. In addition to (at best) covering for that country's murderous autocrats, he also served the Reagan Administration by helping to turn Honduras into a staging area for American-trained death squads in places like El Salvador and Guatemala. (Remember, Eugene Hasenfus was flying out of a base in Honduras when he got shot down over Nicaragua, which is when the Iran-Contra criminal enterprise began to unravel.)

Oh, but of course there's more. Pierce cites a 2005 article arguing against Bush II's appointment of Negroponte as the first Director of National Intelligence after 9/11:

Given the human rights records of the Honduran military and the Nicaraguan contras who set up shop in Honduras during Negroponte's tenure as ambassador in the early '80s, he will have no moral standing as a public official who repudiates abusive interrogation techniques and brutal counterinsurgency tactics. Indeed, some cynics might suggest that's one of the reasons Bush picked him. Negroponte's work in Honduras means, too, that he will come to his new job with a history of forwarding inaccurate intelligence to Washington and leaving out information that would have upset the upper echelon of the Reagan-Bush administration. For his part, Negroponte, who is now 65, has staunchly denied knowledge of "death squad" operations by the Honduran military in the '80s.

There's much more on his tenure in Honduras that ought to make Hillary Clinton say "thanks, but no thanks" to his endorsement. Negroponte served an administration that turned an indifferent eye to the murders of American nuns in El Salvador in 1980, and then went on to serve in the GW Bush Administration as Ambassador to Iraq -- and while he said "torture is never right," he never quite worked up the nerve to say the Bush Administration's use of it was wrong, either. On the intelligence failures that enabled the Iraq war, Negroponte said in a 2011 interview,

“Do you want me to say [the Iraq invasion] was a mistake?” Negroponte demands. “I’m not going to say that. But if you’re asking me, would I have done the same thing if I were in the president’s shoes, I don’t think I would have, okay? I don’t think I can answer you better than that.”  [...]

For his reasons and in his judgment, [GWB] felt it was in the national security interest of the United States to do this. Did he believe this WMD information? He probably did. I mean, I suspect George Bush made his decision in good faith. But if you ask me, what would I have done, I would have given the inspection process a chance.”

So, hey, kind of a moderate, once you get past the "overlooking torture" stuff.

No, this fuckup by Hillary Clinton isn't going to drive us to vote for Jill Stein or have us posting "See? She IS a warmonger!" stories. But we don't know what the hell Hillary was thinking by calling attention to this endorsement. Negroponte's support isn't going to bring over that many Republicans, but Clinton's bragging about it it will piss off -- with good reason -- plenty of progressives. In terms of how it'll affect the general election overall, we imagine it won't have any effect: Most Americans won't recognize the name "Negroponte" at all, those who do will at most remember he was some foreign policy guy, and a significant portion will simply say "Dur-hurr, he has negro in his name!" And for those who are familiar with Negroponte's career, a lot of us will just have to drink a double scotch and repeat to ourselves that Hillary doesn't have to be perfect for us to vote for her. Yes, we understand she wants a big tent. But this guy stinks up the place something awful, and it's a big goddamn disappointment to see Clinton seeing his endorsement as a coup (another thing he was fine with under Reagan). Just don't appoint the bastard to anything, OK?