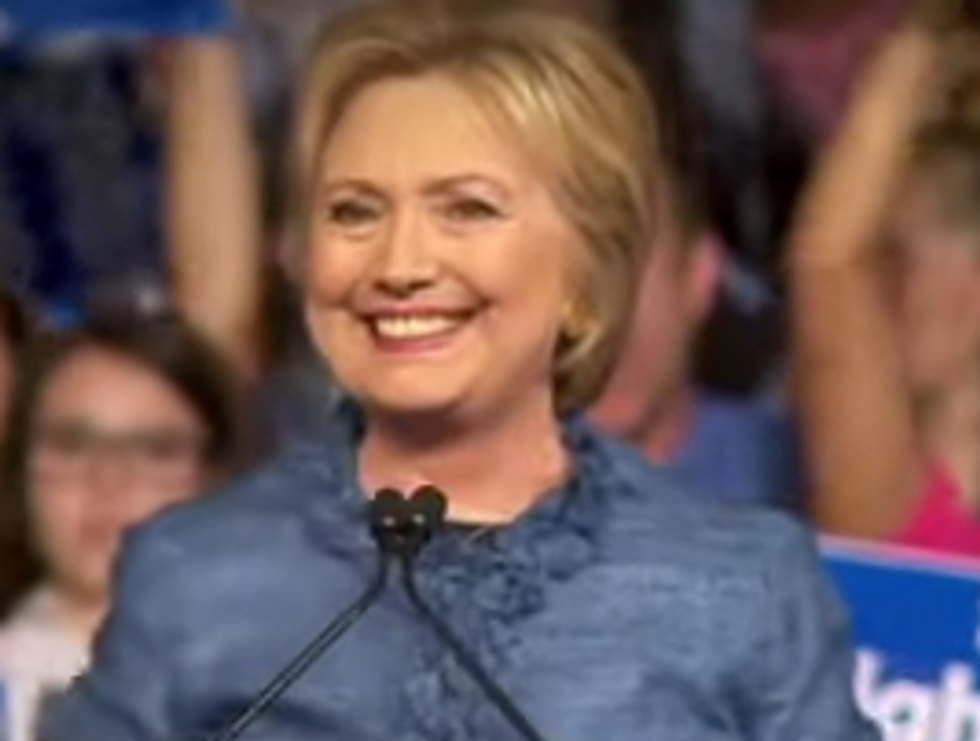 So Madam Secretary Sen. Hillary R. FLOTUS Clinton the First had a pretty good night on Tuesday, eh? And by pretty good, we mean she kicked so much ass, even our feet are bruised. Florida, Ohio, North Carolina, and Illinois were all Hillz Country, and while Missouri still remains too close to call, she has the slightest (very slightest, about .2 percent) edge there. More importantly, though, at least if you are a nerd who cares about fact-type things, she continued to expand her massive increasingly insurmountable pledged delegate lead. Math, bitchez!

As for the superdelegates -- those elected Democrats and other establishment types who get to vote however they wanna, in a really dumb process the Democratic Party should kill with fire -- Clinton has a pretty solid lock on those too. Bernie Sanders's campaign, which had a not so pretty good Tuesday night, is now suggesting he could win the nomination if the superdelegates override the will of the voters and hand him the nomination at the convention, like he's some kind of John Kasich. This strategy is, to use a term of art, so fucking goddamned fucking stupid we cannot even. So we won't.

Having winned all the things, Hillary Clinton had some words to say about that. Wonderful awesome makes-us-so-moist-in-our-lady-regions words that show just how ready she is to take on Donald Trump in the general election and do the one thing none of his sad loser wussy Republican loser competitors can do: stomp all over his teeny tiny hands like a BOSS.

Let us swoon, together, at some of our favoritest bestest MMMMMM SO GOOD words:

Our commander in chief has to be able to defend our country, not embarrass it, engage our allies, not alienate them, defeat our adversaries, not embolden them. When we have a candidate for president call for rounding up 12 million immigrants, banning all Muslims from entering United States, when he embraces torture, that doesn't make him strong, it makes him wrong.

And, yes, our next president has to bring our country together. So we can all share in the promise of America. We should be breaking down barriers, not building walls. We're not going to succeed by dividing this country between us and them. You know, to be great, we can't be small.

We can't lose what made America great in the first place. And this isn't just about Trump, all of us have to do our part. We can't just talk about economic inequality, we have to take on all forms of inequality.

Together we have to defend all of our rights: civil rights and voting rights, workers rights and women's rights, LGBT rights and rights for people with disabilities. And that starts by standing with President Obama when he nominates a justice to the Supreme Court. Our next president will face all these challenges and more.

Programming note: President Obama is announcing his nominee for the Supreme Court this very day. And while Senate Republicans insist they will not confirm any nominee, will not hold hearings for any nominee, will not even look any nominee in the eye, will just stick their greasy fingers in their ears and sing "LALALA DON'T WANNA," Americans are already growing tired of that song, so the GOP is, as per usual, only hurting itself.

Say more nices to us, Hillary:

If we work together, we can make a real difference in people's lives. If we reach out to treat each other with respect, kindness and even love, instead of bluster and bigotry, if we lift each other up, instead of tearing each other down, there's nothing we can't accomplish together.

Awww, yes, that is nice and sweet, and we like it. You know who didn't like it? Cranky white dudes, who can eat all the dicks.

What an odd question from Fox dingleberry Brit Hume, because no one seems to be asking why Donald Trump is so mad, he wants to bomb and torture and kill people and punch 'em in the face. But Hillary is supposed to be a soft delicate flower who isn't allowed to get angry because it's so unbecoming on a chick, huh?

Hillary Clinton has won more votes than any other candidate in either party. She absofuckinglutely doesn't need hot tips from Howie Kurtz on how to talk to him and make him feel better while he's sitting at home in his dirty underwear, wistfully recalling the good old days when only men got to talk on TV.

You wanna see a smile, Joe? Here's a smile.

Sorry the look and sound of a powerful lady saying powerful words makes your little boy pant-bumps shrivel up and die inside, but you fellas had better get used to it. By the look of things, we have many years more of this ahead.