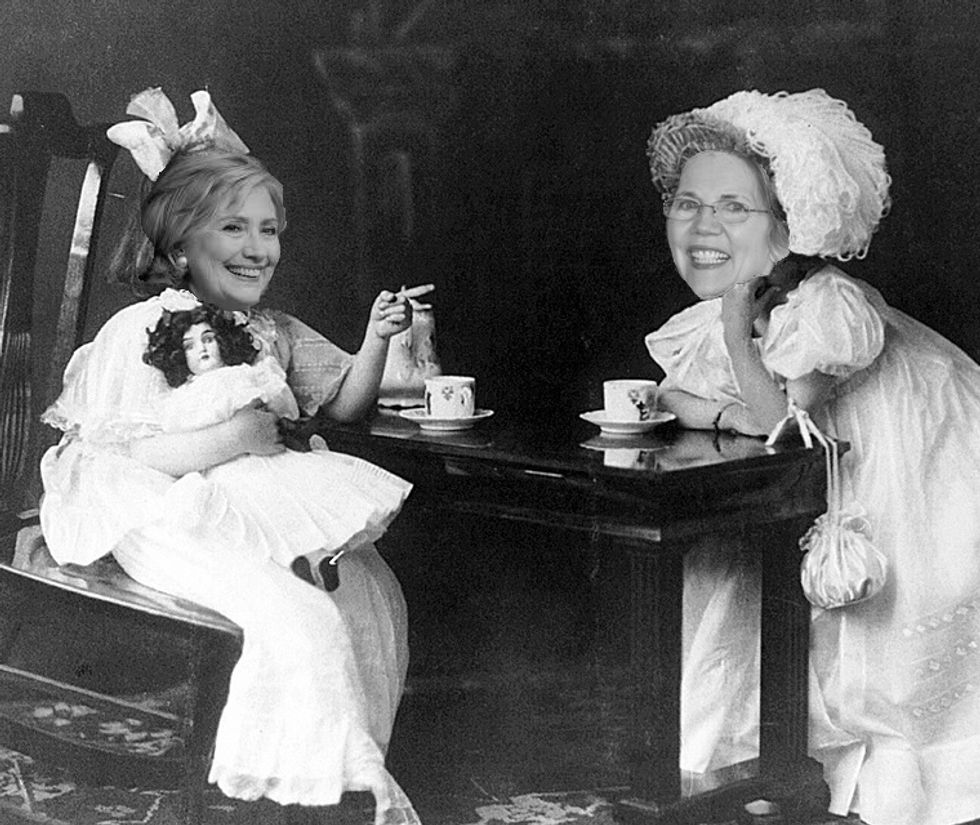 Hillary Rodham Clinton held a private, one-on-one meeting with Senator Elizabeth Warren in December at Mrs. Clinton’s Washington home, a move by the Democrats’ leading contender in 2016 to cultivate the increasingly influential senator and leader of the party’s economic populist movement.

The two met at Whitehaven, the Clintons’ Northwest Washington home, without aides and at Mrs. Clinton’s invitation.

What does it mean?!?! Nobody knows because it was a super-duper double secret probation meeting. Clinton's aides "did not immediately respond to requests for comment," and apparently, the New York Times couldn't even find Warren's phone number. The only person who is saying anything about it goes by the name "A Democrat Briefed On The Meeting." The mysterious Democrat said the meeting was "cordial and productive," which is approximately as informative as saying, "There was a meeting, and they were both there at that meeting and nobody left the meeting with visible scarring."

But why allow the complete absence of any information whatsoever to get in the way of speculating about what might have happened, if we are to believe the Democrat who was briefed, and why wouldn't we? Everyone knows that guy or gal, whatever, is totally reliable.

The Times imagines the meeting was about Clinton reaching out to Warren because "she is aware of how much the debate over economic issues has shifted even during the relatively short time she was away from domestic politics while serving as secretary of state," and further, that "Mrs. Clinton and her husband appear eager to keep a close eye on Ms. Warren; Bill Clinton in the past has appeared sensitive about her oblique criticism of his deregulation of financial institutions."

That is some mighty fine speculation, the Times, based on "appearances" and some anonymous Democrat Who Was Briefed and ... nothing else. Maybe it's true, maybe it's not -- but we like to imagine it went a little bit more like this:

"Thanks for coming to my house, Senator Warren."

"Senator Warren? Haha, that's my mom! You can call me Liz."

"Yeah, I know nobody's really thinking about 2016 yet, and I'm keeping it on the down low, so this is just between us girls and a Democrat to be briefed at a later time. Anyway, I'll just come right out and ask: You are definitely absolutely NOT going to Obama me in 2016, right? Because sure, I can kick the crap out of a brain clot, but my heart would not be able to take that. It's a coronation for me this time or around, or nothing."

"Madam Secretary, you haven't seriously been listening to those 'Draft Warren' dummies, have you?"

"Well, not seriously, no. But I've been hurt before."

"Look, I don't want to run for president. I'm having too much fun in the Senate! I get to yell at bankers all day, and in case you hadn't noticed, the whole party kind of has to listen to me these days, since I'm the only elected Democrat regular Democrats actually like."

"Oh, I'd noticed. Why do you think I invited you here today? We've all noticed, Liz. You're in a pretty sweet position for a first-time senator. And trust me, I should know. But still, I'd like some reassurance that -- "

"You have nothing to worry about, I promise. I've only just started teaching congressional Democrats how to be real Democrats, and once I've got them whipped into shape, I kind of picture myself in a black robe, if you know what I mean."

"Justice Elizabeth Warren does have a nice ring to it."

"I think Chief Justice Elizabeth Warren has an even better ring to it, don't you, Madam Secretary? Or should I say, Madam President?"

"Works for me. But what about the current chief justice? He's pretty young and could be around for a while, so -- "

"Oh, don't worry. We've got some dirt on him. How else do you think we got to keep Obamacare?"

"Ohhhh. So you're just waiting for the right time to -- "

"That's right, Liz. That's right. Oh, and one more thing. I'll need you to schoolmarm me in public a bit more, to 'push' me to the left, as the pundits will undoubtedly say. Because you know in my heart I'm a corporate shill for Wall Street and all. Always have been."

"Ohhhhhh. Riiiiight. Of course. Happy to."

"Great. Touting my Saul Alinsky street cred won't really get it done. And of course sometimes I might need to disagree with you, just a tad. To help me with those moderate Republicans."

And then Hillz and Liz shared a terrorist fist bump, but for girls, and Warren went on her merry way to yell at some bankers, and Clinton instructed an aide to tell some other aide to make some other other aide brief A Democrat about The Meeting without actually saying anything about it. The end.