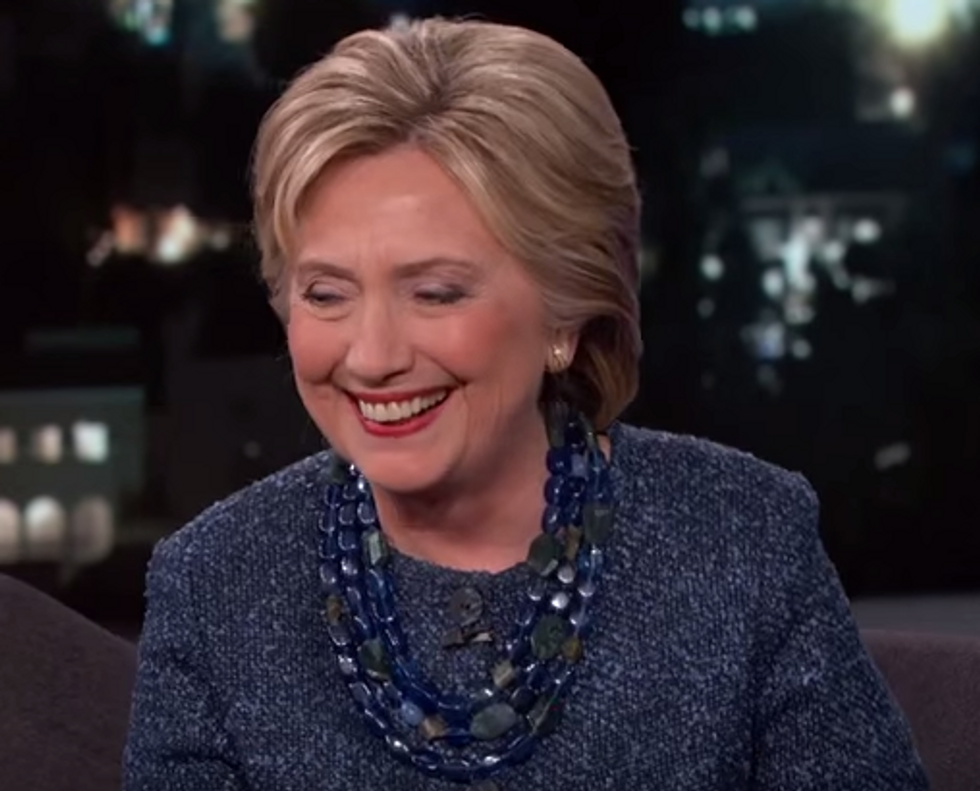 Except she does not call Jeb Bush a pathetic fucking loser, like some of us do. Instead, she is classy as fuck when Kimmel asks her if she would like to take a major chuckle-dump all over Jeb's squishy little head, with his "Jeb Can Fix It" surge, to try to save his campaign, which is deader than a lady's brain forced to remain on life support against the wishes of her husband, in Gov. Jeb Bush's Florida.

JIMMY: Do you feel at all sorry for Jeb Bush?

HILLZ: [Hahahahaha.] You know, look. He's a very accomplished man. And he is out there, making his case. You know, running for president's really hard.

JIMMY: Yeah. And he's showing that.

You see how she did not even call Jeb any names, like how Yr Wonkette does pretty much daily now (because he leaves us no choice)? We are like, "Holy shit, Jeb, seriously with that? For reals? Just drop out before you humiliate yourself even more than you already have, Jesus fuck!"

You know, if I were to advise him, I'd say, you know, there's a lot you can do about trying to fix things.

Not even once does she say, "How you gonna fix your own shoelace, Jeb, seriously? You cannot even hardly operate a hoodie!"

Jimmy also reads a list of some of Ben Carson's finer talking points, and these are not even exaggerated-for-the-sake-of-comedy lines, they are actual things Carson has said, and we know that for a fact, because we have also laughed at all of them, like a common Clinton:

JIMMY: He said evolution is the theory from Satan. He said Obamacare is like slavery. He said homosexuality is a choice, and he knows this because people go into prison straight and come out of prison gay. Yesterday, he said Joseph from the Bible built the pyramids to store grain. And yet, this poll, Quinnipiac University poll they released today said that if you ran against him today, he would beat you by 10 percent.

HILLZ: Well, you know, we'll just have to wait and see how that turns out.

She does not even seem the slightest bit concerned about this poll Jimmy is talking about on Thursday night, maybe because she somehow knows that the very next day, Ben Carson is going to do a super-awkward tap dance all over his own dick. Clinton is probably not losing a lot of sleep worrying about how Carson v. Clinton is going to turn out. Just a guess.

She also says some serious words about how "it really does matter what you say" when you are president, or even running for president, because the president of the United States of A should not sound like a fucking moron when she says stuff. (Yes, we said "she." No, Carly Fiorina, we didn't mean you.) So typical of Hillary, trynna sound all presidential already, while Republicans are running around crying and screaming, "OW, I JUST STEPPED ON MY OWN DICK AGAIN!"

Anyway, it is happy fun funtimes, you watch, you laugh, you think to yourself, "Maybe I will not mind it so much when Hillary Clinton is the president of me, I suppose," and now you buy your Hillary Clinton T-shirt what we made for you. Shut up, yes you do.