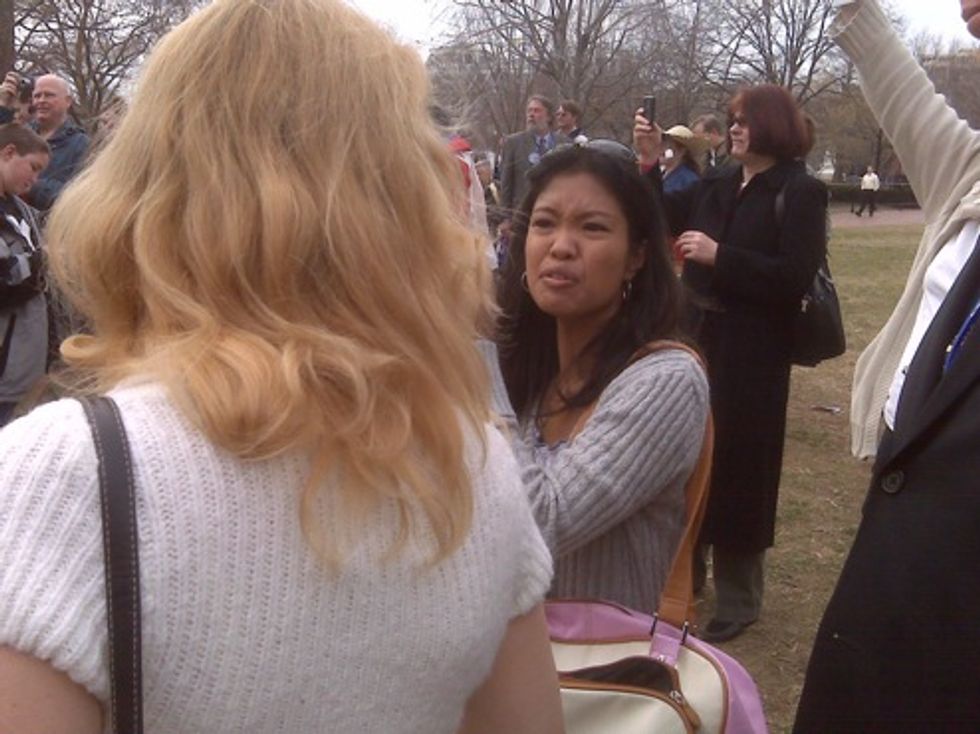 Today at High Noon, the disciples of CNBC teevee ranter Rick Santelli held teabagging parties around the country. Apparently they did not pick up on the nonchalance in Santelli's voice when he said, "we're going to hold a... like a tea party or something because of this Obama, ha ha, weird." Well, the biggest of these parties was in Washington, by the White House, and like 20 people took cabs from CPAC to stand around in poop hats and complain about fiat currency for a few minutes while Michelle Malkin filmed them in various pornographic poses. Major thank yous to poop operatives "Jamie" and "Ethan" for sending most of the photos below, as well as to intrepid D.C. blog reporter Dave Weigel, some of whose photos we have stolen.

Silly lady (guy?), you're supposed to have this funny cliche written on a tee shirt, that's the WHOLE POINT.

You know, it's really not what you're making it out to be.

Michelle Malkin showed up, and wasn't she having a good time. She looks terrified! Maybe she saw an Arab?

That is not an acceptable male accessory.

They do know that the "government" money is being given directly to businesses, for stimulation, right?

No one disputes that gold can be exchanged for money, lots of money, guy. Also, Ron Paul lost everything.

Who knew that Batboy was the official mascot of the U.S. Government?