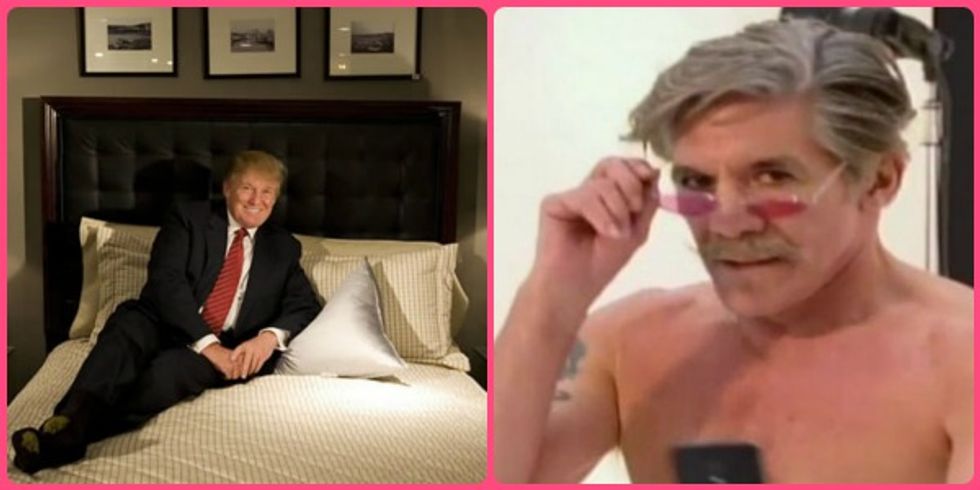 donald, let's tear down this wall between us

Donald Trump and Geraldo Rivera have a complicated relationship. They theoretically have undying love for one another (but not in a gay way, because no homo bro) yet is that love really possible when they each adore themselves so very much?  And what about that whole thing where Trump is a stone cold racist where Hispanics are concerned? Does that cool Rivera's ardor at all? Sorta kinda maybe probably not.

Fox News media critic Howard Kurtz observed that Rivera must be “a little uncomfortable” about the anti-immigrant rhetoric coming from GOP front-runner Donald Trump since he had been close to the billionaire for years.

“He is a friend of mine, I do love the guy,” Rivera admitted. “And then he said Mexican immigrants are dope dealers and rapists.”

“Though I have a deep respect for him and his family, I could never vote for him unless he moderates that position,” the Fox News correspondent added.

Whoa. That's some tough love from Geraldo. Surely it must have taken a lot of nerve to say you would never vote for one of your best friends because one of your besties was a racist demagogue nightmare hell machine, right? We'll never know if this was going to be Geraldo's own Profile in Courage because he found a way to walk his statement back ASAP.

Rivera, who is a registered Republican, predicted that Trump would change his position during the general election because “Donald doesn’t really mean it.”

“I think you have to be a crazy person to get the Republican nomination these days,” Rivera pointed out. “I think that they have to toe a line that is in many ways intolerable for a reasonably intelligent compassionate person.

Ah yes, the all-critical Spanish vote, which is really what will tip the scales in Election 2016. Everyone else that is not faking being a racist demagogue nightmare hell machine is probably going for the Hispanic vote, or even the Latino vote, but Trump will outfox them all by focusing on the fifty thousand or so people that emigrated here from Catalonia or something.

How is this love affair going to survive when Trump reaches the general and keeps on being exactly as awful about Hispanics as he is right now? Do you think Geraldo feels affronted that Trump believes that an entire non-homogenous enormous group of Hispanic voters would vote for Trump just because he puts a Hispanic name on the ticket? Do you think any of these things will make Geraldo love Trump any less?

HAHAHAHAHA. Geraldo Rivera works for Fox News, was actually on Celebrity Apprentice, and got thrown out of Iraq for drawing upcoming actual factual U.S. troop movements in the sand while he was on the air. Hispanic or not, Rivera is pretty much the paradigmatic Trump voter. He'll be on the stump for The Donald in no time.