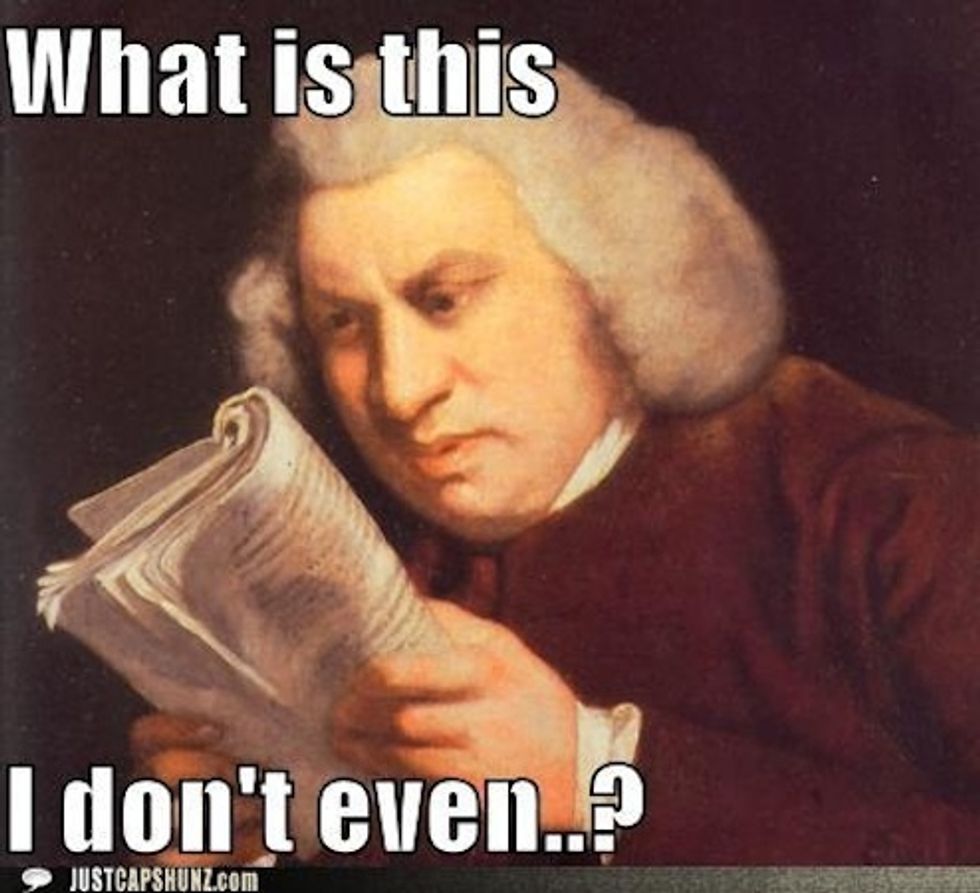 So here is a funny thing. And not an April Fools haha-just-kidding-PSYCH!-YA BURNT! unfunny funny thing, but an actual hilarious-on-any-day-of-the-year funny thing.

You know that arts and crafts store, Hobby Lobby, created in God’s image to provide bored housewives with all their scrapbooking and needlepointing needs at made-in-China bargain basement prices? Of course you do, because Hobby Lobby is suing for its right to tell its lady employees they cannot use contraceptives (scratch that, SOME contraceptives that the Bible says are actually abortion even though they are not abortion and the Bible doesn’t say that).

You may remember way back to last week when Hobby Lobby’s attorney, Paul Clement, argued to the Supreme Court that requiring the company's insurance provider to comply with federal slut-pills regulations would be a “burden” and also super unfair and would make Jesus cry, and the Greens, who founded the store, would be forced to violate their Sincerely Held Religious BeliefsTM, which they discovered -- coincidentally, wink wink -- in 2012, when Hobby Lobby suddenly decided to stop covering those very same medications it now says have been banned by God since the beginning of the world, 6000ish years ago. Justice Sotomayor asked Clement if granting a Sincerely Held Religious Beliefs exemption to companies could lead to refusing coverage for other such medical treatments as blood transfusions and vaccines. Clement said (basically), "Hahah, no, silly lady, don't be ridiculous, we're not trying to restrict real health care, just lady health care" because (actual quote) "it’s so religiously sensitive, so fraught with religious controversy." Justice Sotomayor was said to then bang her head on her desk repeatedly and end her day drinking all the bleach. Or so we've speculated.

So you can see that Hobby Lobby sincerely believes slut pills and abortion are THE WORST and should therefore be allowed to deny its employees access to such. If the government crams this mandate down Hobby Lobby's throat, it will be the end of religious freedom and the First Amendment and probably the apocalypse will be nigh because that is how much Hobby Lobby is opposed to being involved in any way at all whatsoever, even through a third party, with SOME birth control. In all circumstances, no exceptions, no asterisks.

Oh, what't this we have here? Why it is an asterisk, courtesy of Mother Jones:

Hobby Lobby would never spend its own money or have anything to do with contraception or abortion on account of how it SINCERELY believes that shit is whack sayeth the Lord, yo. It would never spend millions of its own dollars so its Bible-abiding employees could cash in on the profits of those sinful companies that make those sinful products. Perhaps it is a mistake. Perhaps Hobby Lobby had no choice but to invest in such funds because there must be some government mandate that requires employers to offer matching funds for their employees' retirement funds. But, like, a real government mandate that cannot be disputed, unlike the birth control one, of course. Right?

Hahah. Of course not.

To avoid supporting companies that manufacture abortion drugs—or products such as alcohol or pornography—religious investors can turn to a cottage industry of mutual funds that screen out stocks that religious people might consider morally objectionable. The Timothy Plan and the Ave Maria Fund, for example, screen for companies that manufacture abortion drugs, support Planned Parenthood, or engage in embryonic stem cell research.

Now, remember, the entire litigious hill on which Hobby Lobby is willing to die like Jesus on the cross is based on the concept that (a) Hobby Lobby believes the medications it used to never have a problem with violate its Sincerely Held Religious Beliefs; (b) once you say "Sincerely Held Religious Beliefs," it's basically like calling shotgun and it is indisputable, argument over, can't touch that or question whether those beliefs are in fact anti-science bullshit (they are) or if they are all that sincerely held to begin with (they are not), and you get to ride in the front seat; and (c) whether lady health care is so controversial, so extra super special, that it is not totally absurd to make exemptions for organizations and companies that have a problem with it on account of how lady health care is not like real health care and is therefore subject to the whiny complaints of dudes who do not understand what they're talking about but sincerely believe it anyway.

Despite the best efforts of the lady justices to point out the utter absurdity of Hobby Lobby's arguments, we are placing our bets that they will be outnumbered by the men on the court who nodded along and said, "Yup, that makes perfect sense to us." Sigh.

Hobby Lobby has been flat-out lying about just how sincerely it believes its own nonsense. Obviously. We know this. It is a fact. And not a "fact" like the "fact" that contraception, which prevents pregnancy, is actually abortion, which terminates pregnancy. It is an actual fact. Hobby Lobby never cared about its employees using these medications prior to 2012, and it sure as heck has no problem with employees profiting from these medications.

So while the court is likely to shrug off facts and give Hobby Lobby exactly what it wants anyway, at least we can take some comfort in knowing that there's apparently a pretty serious consequence for those who violate this one little rule on God's great listicle of rules. You know, for people who sincerely believe that sort of thing.