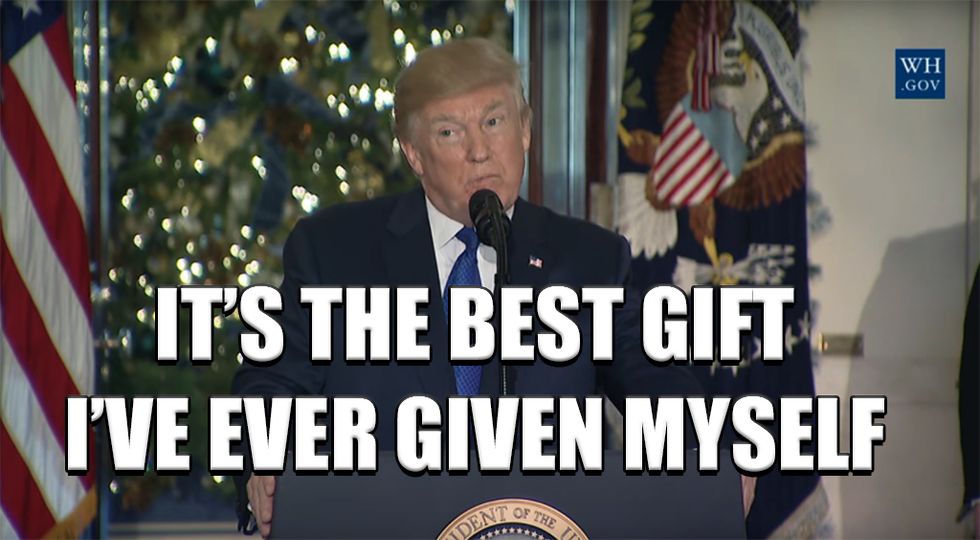 WaPo has a super long article detailing the lengths government officials are going to placate Trump's strange hard-on for Russia, and how Trump's incompetence has left the inner workings of the government running on auto-pilot.

The super rich donor class is whistling Dixie as Republicans will try to ram through the Trump/Ryan tax cuts (for the super rich) starting Monday, with the hope of of getting them signed by the end of next week.

The details of the tax bill are taking shape, and it only gets worse for college and graduate students, city dwellers, or anyone who simply wants her kid to go to a decent public school.

Disaster victims in Texas and Florida are likely going to have fend for themselves next month as Congressional Republicans continue to stall on hurricane relief packages, with some legislators threatening to to pull their support for a government spending bill.

House Republicans keep dreaming about ending sequestration and simultaneously funding the government by passing a defense-only spending bill which is being panned by the House Freedom crazies, budget and defense hawks, and the Senate.

Ahead of the FCC vote to repeal net neutrality later today, the FCC's chief technologist acknowledged that Pai's plan to pass regulatory control to the FTC is bullshit, noting in a leaked internal communique, "If the ISP is transparent about blocking legal content, there is nothing the [Federal Trade Commission] can do about it unless the FTC determines it was done for anti-competitive reasons. Allowing such blocking is not in the public interest."

Even though nobody knows where the hell we're going to find the money, Trump signed the National Defense Authorization Act which contains a provision to increase the number of Navy ships to 355.

Trey Gowdy is refusing to Benghazi Trump's storied history of grab-ass, instead passing the buck off to cops, lawyers, and anyone other than the House Oversight Committee.

The civil war brewing in the Republican party is beginning to boil over as traditional conservatives and neo-cons attempt to tar and feather Steve Bannon.

Super gross Texas Republican Rep. Blake Farenthold is facing MORE allegations of sexual harassment from a former aide who says that Farenthold once commented, "Better have your fiancée blow you before she walks down the aisle...," calls staffers "fucktards," and is such a destructive rage monster that he made the staffer medically ill.

We may finally see where those $1,000 toilet seats go after the DOD announced it will FINALLY comply with a 1990 requirement to audit itself.

Despite the warnings from some economists, the Fed crossed their fingers and raised interest rates again yesterday, hoping like hell that inflation and debt don't catch up.

As Fed chair Janet Yellen cleans out her desk,she noted that the national debt should keep people up at night now that we're about to see a massive tax cut (for the super rich) as Boomers begin to retire.

THE LOSER of the Alabama special election and ALLEGED pedophile Roy Moore refuses to concede the election, and posted a long rant stating, “Today, we no longer recognize the universal truth that God is the author of our life and liberty. Abortion, sodomy and materialism have taken the place of life, liberty and the pursuit of happiness." HURRAY 4 HOMOS AND BUTTSEX!

Minnesota Democratic Governor Mark Dayton has named Lt. Gov. Tina Smith to replace Al Franken in the Senate. Smith has stated that she will run for the 2018 special election to finish the remainder of Franken's term, which concludes in 2020.

Democratic Ohio Rep. Marcy Kaptur thinks that a lack of a dress code on the Hill has led to so much cleavage in Congress that she's just tripping over tits, stating, "I saw a member yesterday with her cleavage so deep it was down to the floor," adding, "and what I've seen...it's really an invitation." Oh hush Marcy Kaptur.

A judge has dismissed six people charged with rioting in Inauguration Day protests as the "evidence" is James O'Keefe bullshit, however, the defendants still face seven other less severe charges.

The mother of Heather Heyer had to secretly bury her daughter so that neo-Nazis can't desecrate her grave, while colleagues, friends and the community continue to come to terms with her murder.

Charlottesville is bracing for protests today as the trial of the neo-Nazi charged with killing Heather Heyer begins.

A 22-year-old Youngstown State University student was arrested for attempting to bribe/pay what he thought was an underage boy into sexxing with Sprite and chicken al fredo.

Russian dictator Vladimir Putin held his annual marathon press conference where he announced that he will run as an independent, and that Russia never engaged in fuckery in the 2016 US elections.

The arrest of two journalists in Myanmar has triggered condemnation from the United Nations as the nation continues its genocide I mean, ethnic cleansing, err, "human rights violations" against Rohingya Muslims.

Democratic Sen. Ron Wyden sent a letter to H.R. McMaster urging him to increase cybersecurity for US elections as Trump and the rest of Congress don't seem to give two tugs of a dead dog's cock about securing our democratic process.

Men's Rights Activists are deathly terrified of losing all their Ameros when their wives divorce them for being rapey assholes, so they're buying Bitcoin in an attempt to "divorce rape-proof" themselves from court orders.

After firing its copy editors, and causing so many fuck ups that blacken the eye of ALL journalists, the LIBERAL New York Times is hiring a fact-checker. It's about time Dean Baquet bought the Old Grey Lady a hearing aid.

Mika Brzezinski apparently hurt Mike Huckabee's delicate constitution, potentially causing him to "take half a baby Aspirin...just to be able to get some sleep," after she criticized his daughter and her lying poot lips. In response, Joe Scarborough called him "sleazy" this morning.

For the millionth time in her life, Omarosa Manigault was "You're Fired," with one official stating that she did not "go quietly," and had to be ejected after attempting to storm the White House residence. Note: Trump's White House has yet to state what she actually did while employed at the White House.

Some MAGA hat wearing douchebags are butthurt after being kicked out of a college-run cafe. Poor little snowflakes.

And here's your late night wrap-up! Stephen Colbert talked about Omarosa being "You're Fired"; Jimmy Kimmeltalked about Spicey's book; Seth Meyers had Amber 'splainer why you should thank black women; Samantha Bee is happy Alabama has a Senator who really cares about kids; and Jordan Klepper talked Trumpkins' favorite moments.

Help us help you by throwing your Ameros at us!