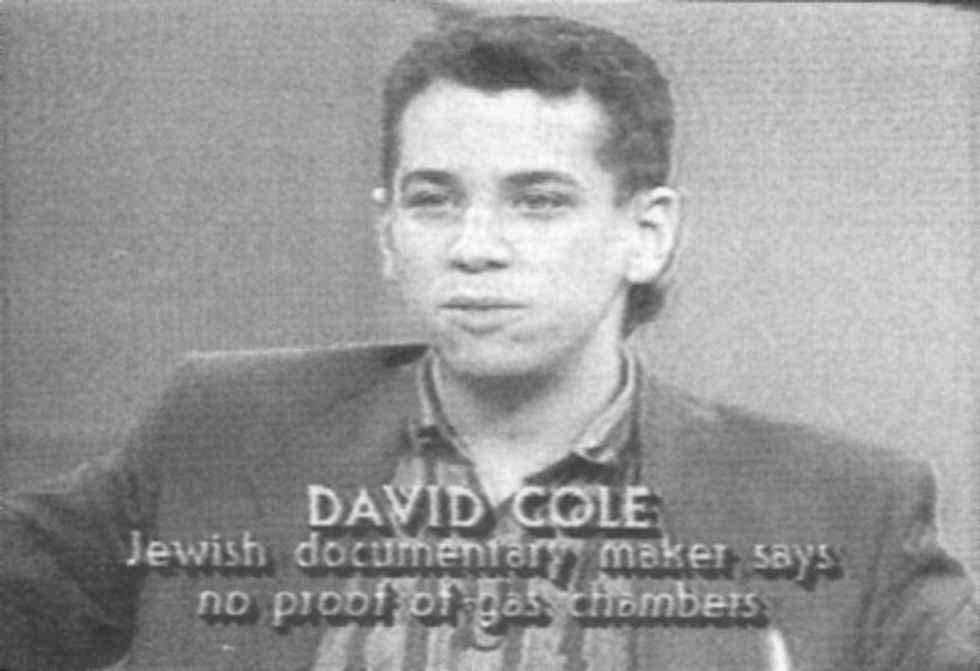 So here's something you don't see every day: A guy who says the Holocaust never happened -- or was, you know, "greatly exaggerated" -- is now calling for "Nuremberg Trial nastiness" for climate scientists and other criminals who have wrecked the economy and freedom. Let's Wonksplore what may be the dumbest rightwing stupidity we've read all week -- although we do need to caution that Erik Rush's column at WND doesn't come out until Thursdays.

The idiot this time out is David Cole, who was a big celebrity in the Holocaust Denial crowd back in the 1990s. He made a few videos claiming that there were no gas chambers at Auschwitz, the Nazis actually murdered far fewer than 6 million Jews, and that there was no overall Nazi plan for genocide. Instead, he said that the Nazis just wanted to expel Jews from Europe and also use them for slave labor, and things just sort of went a little wrong after that. Cole relished the notoriety that came with being a Jew who was just asking questions about the "official narrative," but eventually dropped out of sight after receiving death threats from the Jewish Defense League, and perhaps because he wasn't altogether comfortable rubbing shoulders with loons who not only loved HIS work, but also Timothy McVeigh's.

In 1998, Cole wrote a letter in which he seemed to recant his Holocaust denial, and then he sort of disappeared for a while, resurfacing during the early days of the Tea Party movement as "David Stein" and promoting rightwing political get-togethers with a company called "Republican Party Animals." That second career kind of fell apart when a girlfriend revealed his real identity in 2013, and suddenly not even Breitbart fans wanted to party with a genuine Holocaust Denier. He told The Guardian shortly afterward that despite the 1998 letter, he hasn't really changed his views on the Holocaust, saying that while maybe there were some gas chambers here and there, "there is still a lot of murkiness about the camps. I haven't changed my views. But I regret I didn't have the facility with language that i have now. I was just a kid."

So it's not that he was wrong or anything, he just should have phrased stuff better. And now, like so many other rightwing slugs who have been just a little too openly racist for the polite loonosphere, Cole has found himself a home at Taki's Magazine, where he's moved on from denying history to denying science. Not that he sees it that way, of course; the REAL intellectual dishonesty, he insists, is coming from leftist scientists who want to raise your taxes and take away your freedom, no matter how bankrupt their so-called science is.

How does he know this? Well, for one thing, The Left is constantly "moving the goalposts" on when the climate Apocalypse is supposed to happen, never mind that science has always talked about the effects as gradually accumulating, and not subject to a deadline:

Why, yes, that's exactly what no climate scientist has ever said. Those damned hypocrites, refusing to have actually said what David Cole says they did!

Cole then identifies what he says is the most egregious example of goalpost moving in the climate "debate" (which isn't a debate, but never mind):

The debate is no longer about when warming will kill the last polar bear, but when the seventeen-year “pause” (or “hiatus”) in warming will end. See, everyone agrees that warming has “plateaued,” but the ideologues swear that it’s going to start up again any time now. The game of predicting Judgment Day has given way to a new game: predicting the end of the “pause.”

That's a pretty damning example, except for the part about "everyone" agreeing that global temperature increases have plateaued. Now, it's true that almost everyone who likes to lie about climate change agrees that climate change stopped in 1998, but it's pretty difficult for the scientific community to predict an "end" to a phenomenon that just plain doesn't exist: there is no pause in global warming! Scientific American has debunked that bullshit. So has NASA.

Nevertheless, in a move that he perfected back in his Holocaust denial days, Cole insists it's time for climate scientists to start accepting his definition of what constitutes reality -- that the "pause" is real -- or admit defeat and face the consequences:

These “experts” have hobbled industry, put people out of work, taxed ordinary citizens, and micro-managed every aspect of people’s lives from lightbulbs to asthma inhalers to grocery bags. If the pause lasts longer than the number of years they concede a “pause” should last, there must be a public reckoning. Haul them in front of congressional committees. Initiate civil suits. Be merciless. I’m talking about some heavy-handed draconian Nuremberg Trial nastiness. Call them to account for pushing burdensome public policies while dismissing as “deniers” those who suggested that the pause was not a pause at all, but an ending.

Perhaps someone should execute Neil deGrasse Tyson while they're at it.

It's a lot like when a different Holocaust denier challenged historians to "show me or draw me a Nazi gas chamber" and then rejected every single photograph or blueprint because it was a given that there were no Nazi gas chambers, so no evidence could ever fit his own personal criteria. And since no scientists actually believe that global warming has paused, they're probably not going to be predicting a date for the "end" of a thing that isn't actually happening. Also, those climate scientists had better set a firm date after which they promise to stop beating their wives.