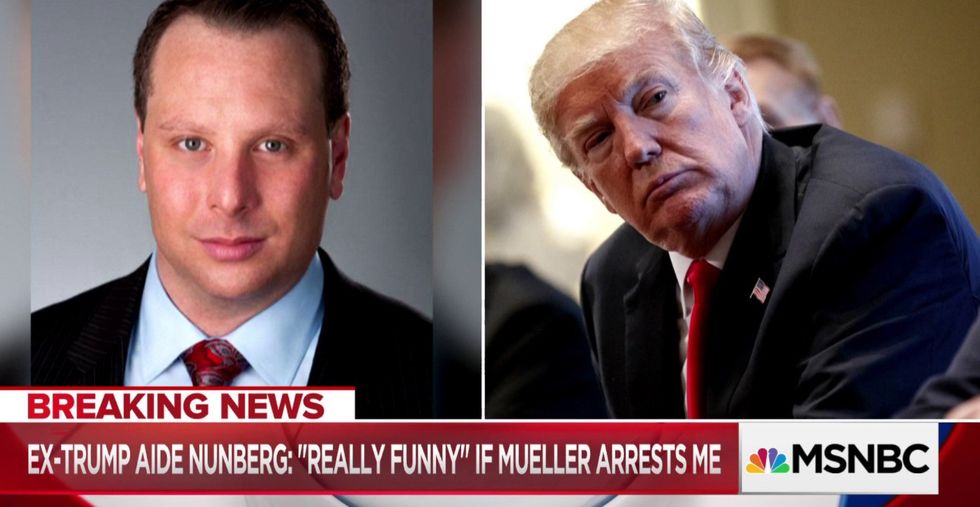 We will tell you! Former Trump campaign aide Sam Nunberg got that subpoena from the Robert Mueller investigation we talked about this morning, the one that asked for all communications with a certain list of people going all the way back to November 2015. Nunberg is supposed to appear in Mueller's office on Friday! But instead, the Washington Post just published an interview with Nunberg where he stomped his feet and lost his shit saying he's NOT GOING, because Robert Mueller is NOT HIS REAL DAD, and it would take WAY TOO MANY MINUTES to go through all his emails to find what Mueller wants to see.

“Let him arrest me,” Nunberg said. “Mr. Mueller should understand I am not going in on Friday.”

Nunberg said he was planning to go on Bloomberg TV and tear up the subpoena.

So of course, Nunberg immediately called Katy Tur on the MSNBC network, so he could have a live temper tantrum for 15 minutes or so. It was ... HOLY SHIT.

MSNBC is throwing up these videos on Twitter as fast as they can, and Wonkette transcribed the thing in real time as fast as we could, so we are going to just throw those things at your face right now, is that OK with you? You get videos, and you get insane quotes, and you will like it. (UPDATE! Now we have the full video, so we have stuck it in right here!)

That is some video! Now here are some quotes!

Sam Nunberg is NOT gonna say nothin' mean about Roger Stone, whom he loves many times!

You know what, Mr. Mueller! I'm not gonna cooperate when they want me to come into a grand jury, to insinuate that Roger Stone was colluding with Julian Assange. Roger is my mentor. Roger is like family to me. I'm not gonna do it!

And Sam Nunberg doesn't want to spend 80 hours looking at his emails, because TOO MANY HOT DATES and WASHING HIS HAIR THAT DAY:

Why do I have to spend 80 hours going over my emails? What does Bob Mueller need to see my emails, when I send Steve and Roger clips and we talk about how we hate people? [...] I'm not gonna spend 80 hours because a bunch of FBI agents and a bunch of US attorneys want ... to harass me!

But wait, Katy Tur said! Sam Nunberg has said in the past week that the Russia investigation isn't a waste of time and taxpayer money. "What has changed?"

But hey, Katy Tur said! What if Robert Mueller arrests you? (Because to be clear, that's what's coming.)

But wait, Katy Tur said! You literally will go to jail:

I'm not gonna go to jail! He's not gonna do anything!

THAT IS NOT A SAFE BET, SIR.

And what about all the communications they want with people who aren't Steve Bannon or Roger Stone?

Do you think I communicated with Corey Lewandowski???? Corey was the one who screwed me over and got me fired from the campaign!

Nunberg added, for no reason in particular besides stating the obvious, "I think my lawyer's gonna dump me right now." WE BET.

Katy Tur asked, "Sam, did you find an email in the last 24 hours that made you worried?"

Got it? Sam Nunberg didn't look at NO EMAILS!

You know what the other thing, Katy, that really upset me? [...] Roger and me were treated very terribly! [...] If Roger and me were [not fired from the Trump campaign], Katy, we would've had the Benghazi parents there at the first debate. We would have had Bill Clinton's illegitimate black child there at the second debate ...

WHOA HOLY SHIT, WE ARE WITNESSING A PSYCHOTIC BREAK MAYBE.

Hey, Sam Nunberg, said Katy Tur! Did Donald Trump commit crimes during the campaign? Do Mueller's investigators have something on him?

I think they may. I think he may have done something during the election.

Finally, Katy Tur asked if anybody from the White House or Trump's legal team or Roger Stone or Steve Bannon had contacted Nunberg and told him to do this, and this was his reply:

And um ... well, that's what just happened on MSNBC!

Also pretty sure Robert Mueller already has all of Sam Nunberg's emails, so it will be fun watching him get hauled off to jail and dealt with even more harshly than if he had just fucking cooperated, Jesus Christ, WHAT A FUCKING IDIOT.

UPDATE: After Nunberg hung up with Katy Tur, he called CNN's Jake Tapper and THE HILARITY CONTINUED!