Holy Shit, Watching Sally Yates On Anderson Cooper Reminded Us She Was Replaced By Jeff Sessions! 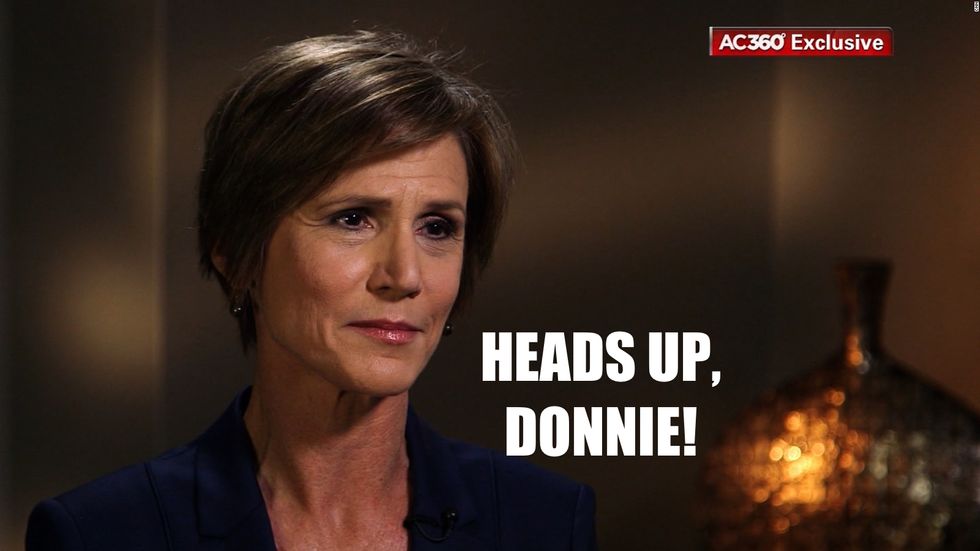 According to the current Running Theory of James Comey popularized by Wonkette (**MUST CREDIT WONKETTE**), he's a good guy who found himself in an impossible situation and did the best he could. He was juggling Hillary's emails, Trump's Russian orgy, rogue agents in his own office, and the electoral college. But James Comey fancied himself the best juggler in the land, so he gamely picked up that stack of plates and threw them up in the air. Now we're all standing in a pile of broken crockery waiting for the next plate to fall out of the sky and hoping it takes out The Orange Idiot.

But Sally Yates does not throw plates. Sally Yates laces up her boots and does her job, without drama. Every day, for 27 years straight. And if you were watching her interview with Anderson Cooper last night, you probably shed a tear for what might have been if we'd had an FBI director who just followed the rules without turning everything into a highwire acrobatics act.

She had come here, given a head’s up, told us there were materials. And at the same time, we did what we should do. Just because someone comes in and gives you a head’s up about something and says, I want to share some information, doesn’t mean that you immediately jump the gun and go take an action.

I think if you flip this scenario and say, what if we had just dismissed somebody because a political opponent of the President had made an utterance, you would argue that it was pretty irrational to act from that manner. We did what we were supposed to do. The President made, ultimately, the right decision.

An "utterance"???? Sally Yates is not some overgrown frat bro. She is not having any of this "heads up" nonsense. As she told Anderson Cooper,

There was certainly a criminal statute that was implicated by his conduct. [...]

There was nothing casual about this.

We know that Don McGahn graduated from law school. But we are just wondering if he spent more time practicing with his '80s cover band than studying. Because at his second meeting with Sally Yates on January 27, Don McGahn actually asked her why the nosy parkers at the DOJ cared if one White House official lied to another one. Like, why even are you here, Mrs. Buttinsky????

So then Sally Yates had to splain to this longhair all over again why, "the NSA is the last person you want to be vulnerable to the Russians." Or, as she put it to the New Yorker,

We had just gone and told them that the national security adviser, of all people, was compromised with the Russians and that their Vice President and others had been lying to the American people about it. We expected them to act...We expected them to do something immediately.

But Don McGahn, being a political hack, was unable to wrap his mind around a person with integrity just doing the right thing because it was her job. So he decided he would have to see all the underlying documents, because Sally Yates was probably a nefarious Trumphater trying to frame poor, innocent Michael Flynn.

So Sally Yates gave him the receipts on January 30. Which is not "a week later" as Spicer arglebargled at his press briefing. But still, Russia's bestie Michael Flynn continued to receive classified briefings for another two weeks before being let go for "trust issues."

Ms. Yates Would Like to Set the Record Straight

In their effort to distract from the Dumpster Fire of Corruption that will eventually devour them all, Republican politicians have taken to shouting "UNMASKING" and "LEAKS" while pointing at random passersby. Sally Yates sees you coming, Ted Cruz, and she does not have time for your bullshit.

The New Yorker story makes clear that Michael Flynn's name was never "masked" in the first place. Because, "Chill out, Sergei, we'll get those pesky sanctions lifted in January," only makes sense if you know that it's not a phone call with the all-night liquor store deliver guy.

Yates declined to talk about any classified information, including underlying evidence in the Flynn case, but it seems clear that Flynn’s name was not masked in the reports on the phone call that she saw. She said, “I oftentimes would get intel reports that included the name of the U.S. person. Not because I or anybody else had asked for it to be unmasked, but because that intelligence only made sense if you knew who the identity of the U.S. person was, and that’s an exception to the minimization requirements.” In other words, the authors of these intelligence reports included the names, because the reports could not be understood without them. She noted that there was one other common instance in which an American’s name would be included: “If it’s evidence of a crime.”

Yates said that she never made an unmasking request, adding, “This idea that there’s this dramatic unmasking of a name—in my experience, that never happened.”

And NO, Sally Yates did NOT leak to the media like a common White House staffer. Because Sally Yates is a professional, not an arrogant MBA real estate douchebag.

Anderson Cooper asked about reports that Trump responded to her testimony before the Senate by saying, "Watch them start to choke like dogs." Sally Yates didn't blink.

I'm not going to dignify that with a response.

Because Sally Yates has discretion. Unlike some people whose aides have to wrestle the phone out of their hands to stop them tweeting out witness intimidation.

No, I'm Not Crying! There's Just Something in My Eyes. Like a Twig.

The closest Sally Yates came to showing emotion in her interview with Anderson Cooper was when she discussed getting fired by the White House for failing to enforce their ludicrous Muslim Travel Ban. Although she was grateful to receive the letter personally, rather than learning about it from television like James Comey.

Intellectually, I certainly knew it was a possibility. But I'd be dishonest if I didn't say it felt like a punch in the gut.

I wasn't looking to be fired, but given the situation, I couldn't have done anything else and lived with myself...

So, there you have it. A career civil servant with flawless integrity was replaced by a Jeff Sessions, a demented racist with ties to Russia. And when he had to recuse himself, the Flynn investigation fell into Rod Rosenstein's lap. God bless America!

Ad-free, all day, Wonkers! Give it up!