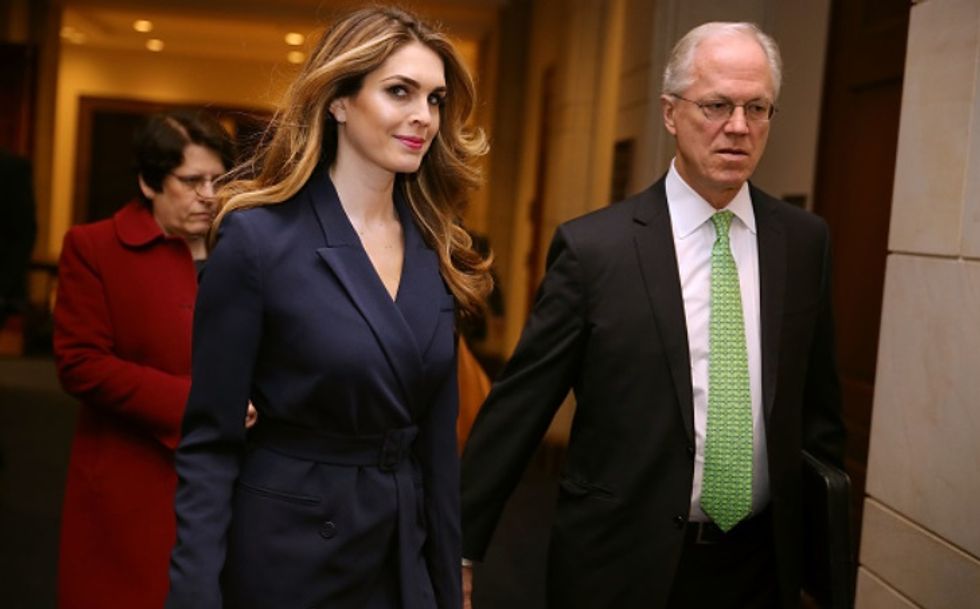 Today's big Russia news is that White House Communications Director Hope Hicks is testifying before the House Intelligence Committee (HPSCI), which is not as interesting as Hope Hicks hanging out for days on end with special counsel Robert Mueller, because LOVE YOU ADAM SCHIFF, but the House Intel Committee is a worthless shitshow at this point. It's not that Hicks doesn't have stories to tell, as she clearly does. But the GOP leadership of HPSCI isn't much interested in "doing an investigation," and lately when people from Trump's inner circle (Steve Bannon, Corey Lewandowski) come before the committee, they suddenly forget their words. (Oh look, according to a Democratic member, that is already happening in Hicks's interview. SURPRISE!)

Maybe Hope Hicks's absence is why Donald Trump was so frustrated during Executive Time today:

Poor thing is lonely! He knows Hope will be gone all day and she won't be there to tell him he's smart or hold her hand up to his hand and say, "look, your man hand is almost as big as my lady hand!" or iron his pants while he's wearing them, and oh what a yucky Tuesday!

But maybe Hope Hicks will meet somebody! Look, hear us out. We are not slut-shaming Hope Hicks, because we firmly believe she has the right to do sexytime with any person she wants at any time. It is a fact, though, that Hope Hicks has been doing some Trump World dating lately! She's been linked to Corey Lewandowski multiple times -- remember how Trump told Hope that Lewandowski wasn't worthy of her "tail," which is just a nice thing for an older man to say to a younger woman? -- and most recently she has gone splitsies with White House wife-beater Rob Porter, which is very good news for Hope Hicks. The point is she is single, unless the only reason we hear about Hope's dating life on the regular is because they are cover stories to hide how she's been bonesies with the Orange Shit Knob this entire time.

(Remember how Michael Wolff said Trump is having an affair with somebody in the West Wing RIGHT NOW? The finalists are Hope Hicks, Kellyanne Conway and Stephen Miller, who did fall asleep Monday during Important White House Meeting Time, so it's entirely possible he was still recovering from the walk of shame out of the Lincoln Bedroom he allegedly did Monday morning according to the rumor we just made up.)

REGARDLESS. House Intel Committee! Speed date! But only if Hope Hicks wants to!

NO! HOPE! BAD! Devin Nunes is a BAD MAN, and when he says "I'll show you my memo," nothing good ever comes of it.

NO! HOPE! BAD! Besides, only thing he likes to do is Benghazi 'n' Chill, which is a complete boner killer.

Wait no. That is not the guy named "Peter" on HPSCI.

NO! HOPE! BAD! You don't know who that guy is, but he is GOP Rep. Mike Turner from Ohio, and he is a fucking moron, and also an interrupting cow, and we want our Hope Hicks to find somebody who will listen to her. Also, he is having some MARRIAGE ISSUES.

OK, if Hope Hicks wants to speed date at HPSCI, we think (?) she's going to have to look at the Democrats. Hell, she used to BE ONE. Also, they are just way more fuckable. For instance, Jim Himes is a DOLL:

Know who else is ADORKABLE? That's right, it is Adam Schiff!

Really, any of the other Democrats would be acceptable too, but not Eric Swalwell because ... eh, Wonkette is just vetoing him.

In summary and in conclusion, Hope Hicks and Jackie Speier, congresswoman from California, are now engaged to be married, and they are registered at Crate & Barrel, and also all the other cute little shoppes in Connecticut where rich Democrats like Hope Hicks's family go shopping. They will be very happy together, especially once Hicks flips on Trump to save herself in the Russia investigation and becomes a Democrat again: