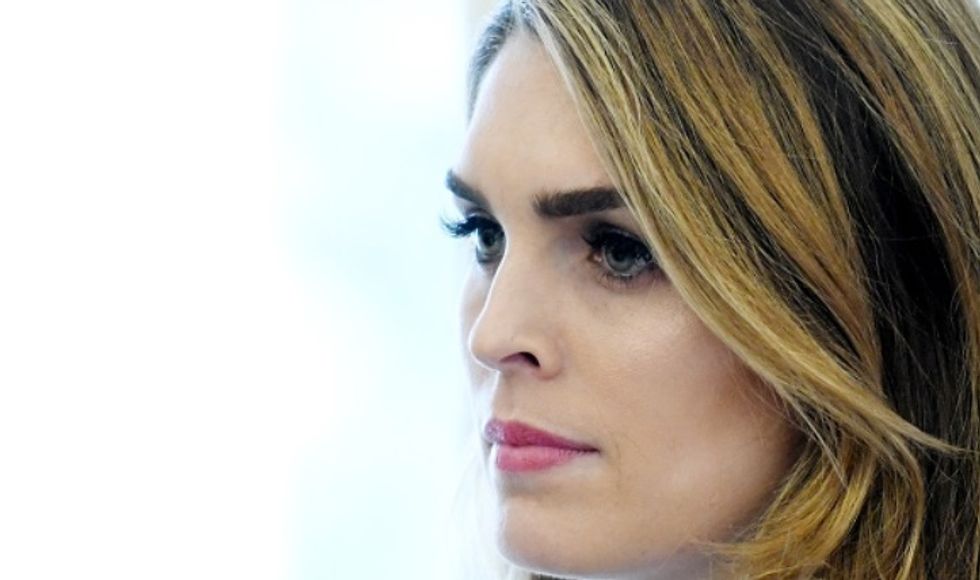 On Tuesday, we made all the hilarious jokes about White House Communications Director Hope Hicks's testimony for the House Intelligence Committee. It was clear she wasn't going to answer any questions (she "Bannoned" them, according to one lawmaker! THAT SOUNDS PERVERTED), so we figured instead we'd try to pick Hicks a new boyfriend or girlfriend from the committee, because she is Single And Ready To Mingle now that she's gone splitsies with wife-beaty Rob Porter.

But it turns out ONE funny thing happened during Hicks's testimony, and that funny thing does not involve Devin Nunes inviting her on a date. Instead she admitted that SOMETIMES she tells what she referred to as "white lies," as part of her job working for Donald Trump:

Hope Hicks, the White House communications director, told House investigators on Tuesday that her work for President Trump, who has a reputation for exaggerations and outright falsehoods, had occasionally required her to tell white lies.

But don't worry, she doesn't tell BIG IMPORTANT LIES like her boss the liar does:

But after extended consultation with her lawyers, she insisted that she had not lied about matters material to the investigations into Russia’s interference in the 2016 presidential election and possible links to Trump associates, according to three people familiar with her testimony.

Hope Hicks went over a list of her various "white lies" with her lawyers and they all decided she hadn't told any "white lies" about Russia. GOTCHA.

As NYT reports, this came during an EIGHT HOUR session, where Hicks did not invoke executive privilege, and also did not talk about anything that happened during the Trump transition or while she's worked at the White House, because that's totally normal behavior.

OR! Since she wouldn't talk about anything that's happened during her time in the White House, is it possible her "white lies" are about things like the coordinated White House cover story about Donald Trump Jr.'s meeting in Trump Tower with 50 million Russian spies? "Oh, those emails will never get out," Hicks reportedly said, according to Mark Corallo, the former spox for Trump's legal team who resigned, according to Michael Wolff's book, because he thought he was witnessing obstruction of justice committed in real time by Trump, Hicks, and others, who were traveling home on Air Force One from the G-20 that weekend. As NYT reminds us, Hicks was also involved in the James Comey firing.

Hicks may not have answered questions for the House Intel Committee, and she may not have found a new boyfriend there either, but she sure did sit with special counsel Robert Mueller for two days. Wonder if she told him about all her lies, and if she did, wonder how "white" Mueller thought they really were.

Ohhhhh Hope Hicks! We ask again, WHAT HAVE YOU DONE?