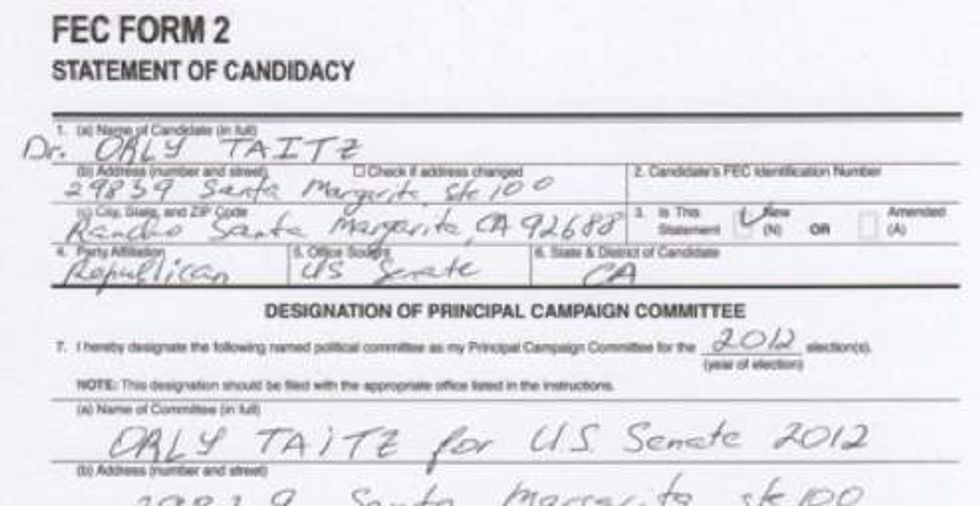 Dim-bulb weirdo Orly Taitz has done it! She (barely?)managed to fill in most of the spaces on one of those U.S. Senator job application forms with a few hard-won manual scribbles and then decided to add "Dr." before her name in the top left margin space, to make it seem serious. Comedy thanks you, Orly!

As everyone probably no longer recalls, this is not her first brush with utter campaign-related failure (now a separate category from her other divisions of total human failure) -- she ran unsuccessfully for the GOP nomination for California Secretary of State in 2010. Why will voters take her seriously for this particular whirl of the psycho merry-go-round?

From a comical September interview with the Sacramento Bee:

"I think I do have a chance specifically because I do speak Spanish and I speak Hebrew," Taitz told The Bee after attending a town hall-style event on Latino issues at the California Republican Partyconvention in Los Angeles.

There you have it! She is as qualified as any municipal court translator to run for Senate. [Orly Taitz/Sacramento Bee]