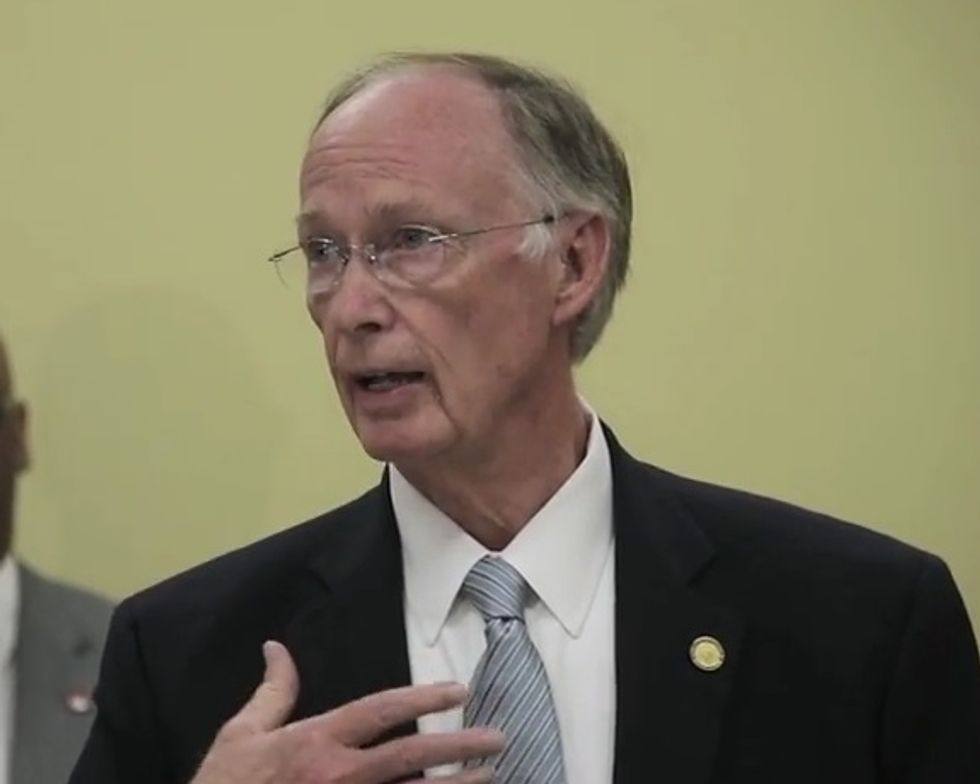 He feels just awful about all this, no more questions

[wonkbar]a href="http://wonkette.com/600056/listen-to-alabama-governor-talk-about-touching-dirty-pillows-of-not-his-wife">[/wonkbar]Alabama Gov. Robert Bentley would like you all to just hush up now about all the sexxytimes he didn't have with his chief political advisor (and not-wife), Rebekah Caldwell Mason, because he and the LORD have talked it over, and Bentley said Monday that he's asked God for forgiveness and God said okay. Thankfully, no audio recordings of Bentley's conversations with the Almighty are available, so we don't have to hear him telling God how much he likes giving Him a reacharound of loving grace.

[wonkbar]a href="http://wonkette.com/599981/alabama-governor-didnt-bone-that-lady-sexism-boned-that-lady"[/wonkbar]Bentley has insisted all along that he did not have a physical relationship with Ms. Mason, who resigned March 30 after sexism had all that phone sex with her. The governor is also being investigated for ethical violations and possible misuse of public funds during the affair. Alabama legislators are also considering impeaching the governor.

Bentley briefly talked about his request for divine forgiveness during a visit to Limestone Correctional Facility. Bentley's trying to push through a package of prison reforms, so it would make sense that he'd visit a prison. Of course, as Rachel Maddow has had no end of fun pointing out, maybe right now photo ops of the governor surrounded by prison bars don't make for the best optics. It's the sort of problem any good political advisor could warn him away from if only his political advisor hadn't resigned after boning the governor. Allegedly.

In his brief remarks, the family-values governor -- who last year filed a brief with the Supreme Court in which he said same-sex marriage is "demeaning to democracy" -- praised God and the good people of Alabama for being so understanding of the weaknesses which may lead a straight-married man to let his penis wander:

But I asked other people to again forgive me and I've already done that and I have truly asked the people of this state -- they're the folks who love me and are the best people in the world -- I have asked them to forgive me.

Bentley at least took sole blame for his moral lapses (although we might point out yet again that he's still in his job, while Ms. Mason resigned hers), saying,

And, you know, it's mine. I own it. I own it. I did it. I point no fingers to anybody else. I make no excuses from that. I own my problem. It's not your problem. You have other problems. ... And so I have humbly opened myself up to the people of this state and I have asked them to forgive me. And let me continue to do the things they elected me for twice and that's to try to make their lives better. And that's what I'm going to do.

He added that as far as he's concerned, now that he's had phone sex with God, the affair is a non-issue and everyone should just shut up about it and get on with making Alabama a wonderful place to live, which God knows is quite a job, all right:

Please add your own joke about rear views and mirrors here.

Bentley closed by saying that while he was completely over the whole thing, he understood that it was new information to everyone else, but since he acknowledges responsibility for whatever he did or did not do (and no, he will take no more questions on that), it's time for forgiveness, "And that's why I ask the people of this state to forgive me because they are a forgiving people and they know God's grace."

A spokesman for the Lord of Hosts was unable to confirm whether Bentley's request for forgiveness had been granted, noting that the Almighty has been swamped all month with requests for intervention in the NCAA Basketball Tournament.