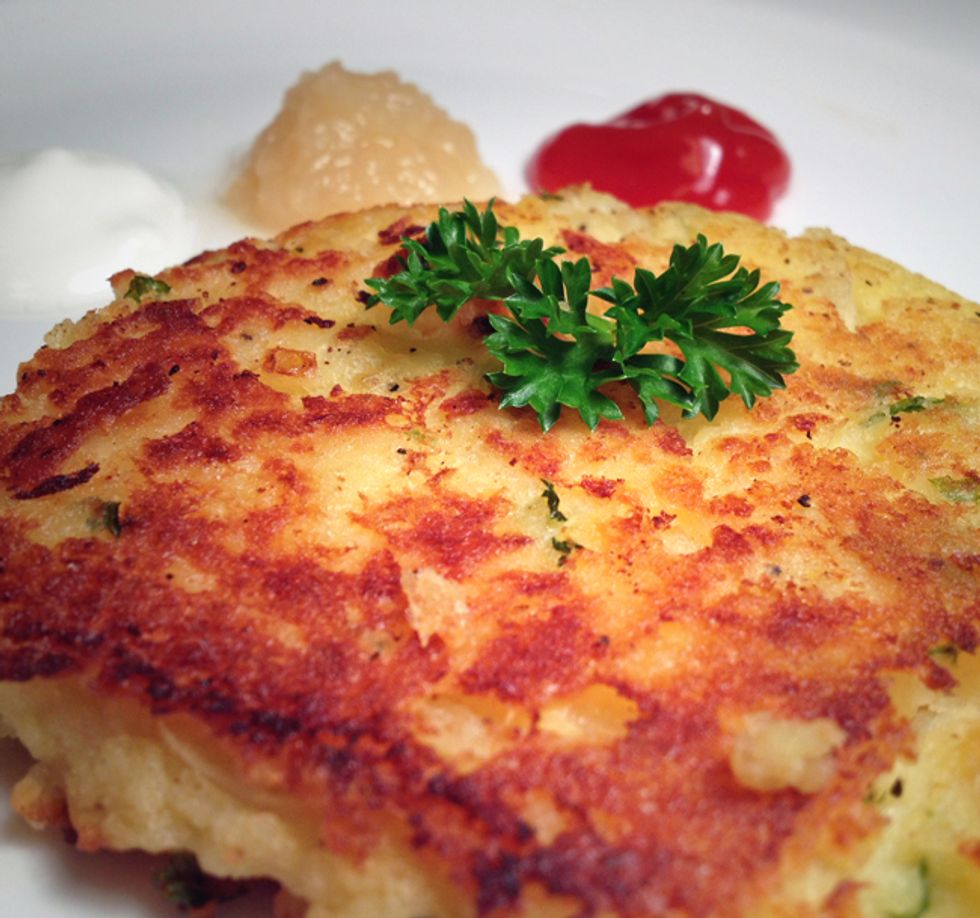 In this latest edition of Tyin’ On Ur Food Bag, we can fry day-old mashed potatoes and have some potato pancakes. No one’s doctor will ever recommend fried potatoes, though potato pancakes can and do happen! They make you feel two things: invincible first and then ready for a nap. This is a special and infrequent prize to be collected and savored.

When I was little, potato pancakes were my job. That was a thing I could do at the stove by myself, standing on a chair, while Mom gave herself a permanent or watched Erica Kane. I called her up to tell her I was making this recipe for you. “Don’t they know how to make potato pancakes?” Maybe, but what about the people who have not? I can’t have them finding out about this from strangers. “Don’t tell them about mashed potatoes. That’s your grandmother’s recipe, the one she cooked for prisoners on the chain gang.” I’m pretty sure you know what evaporated milk and crime is, but act dumb if she asks, OK?

I kind of make Mom’s mashed potatoes, though I include sour cream to the evaporated milk (or cream), and squeeze in some roasted garlic bulbs. She recommends a pat of margarine and I sometimes agree. We both use plenty of butter, salt and pepper, and a hand-mixer. If you have mashed potatoes made with most of these items, you’re all set.

salt and pepper, as needed

Mix the beaten egg into the mashed potatoes with onion and parsley. Blend well. Season with salt and pepper.

In a non-stick skillet (iron skillets are more right than rain), heat butter until bubbling on medium heat. Drop heaping tablespoons of the potato mixture into the pan and press it down with a spatula to form patty-like shapes. Toast the potatoes on each side. Serve with suggested toppings.

Now that you know about potato pancakes, don’t you think it’s time you learned how to make your own applesauce? Me too!

6 apples, peeled and cored and quartered

Put the apples in a large pot. Add lemon juice, water, sugar and cinnamon. Bring this to a boil and then reduce the heat, and simmer for 30 minutes. Stir occasionally.

Remove from heat, discard the cinnamon stick, and mash or puree the apples. Store in the fridge for about a week, or eat it with potato pancakes as soon as humanly possible.