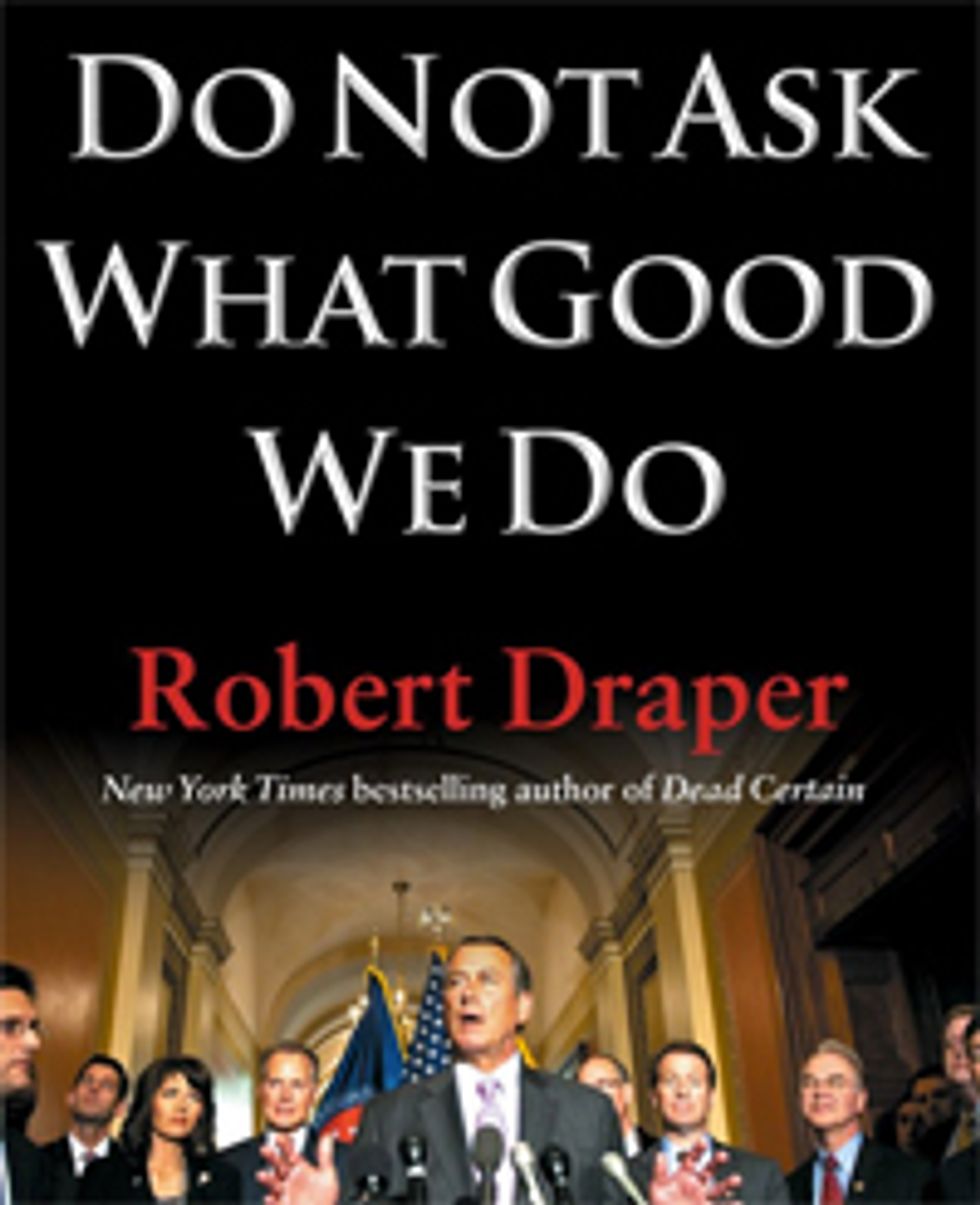 Your Wonkette is nearly finished with the hot politics book of the week, Robert Draper'sDo Not Ask What Good We Do, and unlike most hot politics books of the week, this one's pretty great in most ways: thorough reporting, readability, legislative detail, and, most importantly for your Wonkette, a page tally below 300. It is a book about how terrible the 112th Congress is. Draper frames his narrative through the eyes of ~15 individual House members -- primarily Tea Party freshmen, but also super old people like John Dingell and Walter Jones. You should buy the book! But since you are all poor scum who blow all of your welfare checks on pay-porn subscriptions, here are a few delightful excerpts to skim over instead.

We'll always share anything that involves ol' Walnuts McCain hollering at people. Here he is yelling at Gabby Giffords (before she was shot, however, so it's "all good.")

Giffords herself was more of a survivor than a warrior. She navigated the fault line between her conservative voters and her party's progressive agenda with acrobatic expertise -- which did not mean that her footwork escaped notice. The Republicans in the Arizona delegation felt that her efforts to secure her district's porous border lagged behind her tough talk. During one breakfast with her Arizona colleagues, Giffords described a recent trip she had taken to get to know ranchers along the border and then chidingly added, "All of you were invited, too. How come you weren't there?

"Listen, young lady," growled Senator John McCain. "We know a little bit about the border, and I won't be lectured by you about it!"

The tradition of the jar dated back to the mid-1990s, during Sheila Jackson Lee's early days in the House. Its precise origins were forgotten, but it began with a congressional aide who brought a jar to work and put a quarter in it once Jackson Lee made a speech on the House floor that day. The jar would then rotate the following day to an adjacent desk. If Jackson Lee spoke, the staffer was obliged to drop a quarter in the jar and move it to another staffer's desk. On the rare day that the Houston congresswoman did not speak, the staffer who had the jar that day was rewarded with all its contents. The Jackson Lee jar concept began to spread with multiple jars springing up in numerous offices on the Hill, both Republican and Democrat...

The jar-passing carried over into the next decade. In John Dingell's office, a fanciful staffer ornamented their Jackson Lee jar with felt embroidery. In Tennessee Congressman Joe Knollenberg's office at some point in 2006, the jar's contents became so heavy and the aides so sick of lugging it from desk to desk that they finally broke down and used all the money to pay for lunch for the entire staff. Rumors, most likely apocryphal, began to spread of hundred-dollar payouts.

Remember how Paul Ryan's budget strangely omitted destroying Social Security as one of the glorious steps on the Path to Prosperity? It wasn't because Paul Ryan suddenly fell in love with Social Security, or anything.

At least one senior member's major concern was addressed. Said NRCC chairman Pete Sessions during a conference, "Please--take on Medicare or take on Social Security. But not both." And so despite Paul Ryan's urgent cry that by 2017 America would "no longer have enough money coming in to pay off all the benefits" for Social Security, the Path to Prosperity left the latter matter largely unaddressed."

Some of you will recall how last year the four South Carolina GOP freshmen, who argued forcefully and successfully for their conference to ban appropriations earmarks (the Greatest Evil of All Time), realized shortly thereafter that they would then have no money to deepen the Charleston port that was foundational to the state's economy. We hadn't known how that ended until now, and, unsurprisingly, it involved calling a grown-up who actually knew how to do his fucking job:

They went as well to Chairman Hal Rogers of the House Appropriations Committee and pressed for him to insert it into a funding bill. With a straight face -- but, it was believed, with barely disguised glee -- the wily lawmaker once known as the Prince of Pork lamented that, alas, their request appeared to be an earmark, and alas, earmarks were banned.

On the House floor, [Trey] Gowdy said to Rogers, "I don't know who you're trying to punish -- if you want my seat, I'll go back to being a DA!"

It seemed abundantly clear that the old bulls were making the young turks pay for the beliefs they shared with their political godfather DeMint. Meanwhile, Lindsay Graham was staging press conferences, drafting legislation, and threatening to hold up all White House appointments. All to no avail -- until he reached out to the lone South Carolina Democrat, seventy-year-old, nine-term congressman Jim Clyburn.

Clyburn called the White House Office of Management and Budget. An OMB official contacted the Harbor Maintenance Trust Fund. The money was procured. It was not an earmark. Rather, the telephone request was direct and paperless, a so-called phone-mark -- the way most such funding request historically took place, so long as you knew someone to call, and as long as that someone would take your calls, perhaps because they owed you a favor or knew that they could count on you for a favor down the line.

Tea-baggers, he preferred to call them. Over time it became clear to his (significantly younger) staff that Mr. Dingell (as they called him) was unaware of the term's alternate meaning. This had been a source of private hilarity, until March 2010, when Dingell was invited to be a guest on The Daily Show with Jon Stewart to discuss the recent passage of the Democrats' landmark health care legislation, which had been Dingell's legislative raison d'être not only throughout his career, but also throughout that of his father, John Dingell Sr., whose congressional seat the son was elected to after the elder died in office in 1955. To say "tea-bagger" on the comedian Stewart's much-viewed show would... well, no one on his staff could envision an upside to it.

Dingell was surprisingly nervous about going on the show as it was. The congressman had been studying past episodes as if preparing for a confirmation hearing--relishing the way Stewart had verbally undressed TV stock tipster Jim Cramer, yet dreading such a fate himself. Staffers took turns playing the host in mock Q&A sessions with the boss. After maybe the third or fourth mention of "tea-baggers," Michael Robbins -- Dingell's chief of staff at the time -- finally spoke up.

"Sir," he said carefully, "do you know what that actually means?"

By the look on Mr. Dingell's face, it was clear that he did not.

Because Mr. Dingell was hard of hearing, Robbins knew that he would have to speak loudly and enunciate. Well, sir, I guess you could say it's a kind of sex act, when a man places his testicles onto the face of another person...

One of the four other staffers in the room turned the color of a fire engine.

Followed by: "But it's funny, and I'm going to keep using it."