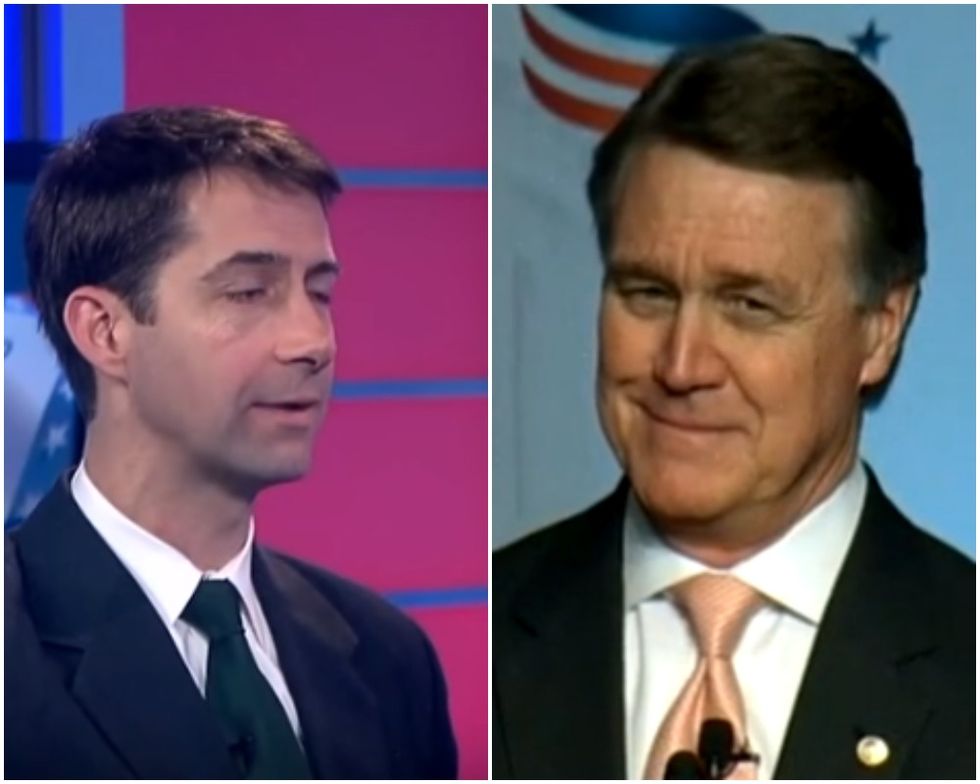 A lot of people are very righteously angry on this Martin Luther King Jr. Day, that Trump-sucking sycophant senators Tom Cotton (R-AR) and David Perdue (R-GA), both of whom were in the room when Donald Trump reportedly and repeatedly called Haiti and all the countries of Africa "shitholes," do not remember Trump saying that, and also deny it 100%, and also they think maybe he said "shithouse" and not "shithole" which is totally different somehow:

"I did not hear derogatory comments about individuals or persons, no," said Cotton, who was in the Oval Office meeting on Thursday where Mr. Trump questioned why the United States would accept more people from "sh*thole countries," according to Illinois Democratic Sen. Dick Durbin. [...]

"I didn't hear it, and I was sitting no further away from Donald Trump than Dick Durbin was," Cotton said Sunday. Cotton declined to say definitively that Mr. Trump did not say the word "sh*thole," unlike Sen. David Perdue of Georgia, who flatly denied Mr. Trump used the word on ABC's "This Week."

Well that settles that. Except:

Oh that's right. Lindsey Graham confessed. And he says he gave Trump the old what-for treatment when he said the "shithole" thing. And now, on Monday, he's not changing his story.

So who is lying? Is it Dick Durbin and Lindsey Graham? Is it GOP Senator Jeff Flake, who says he heard about the comments before they were in the newspaper? Or is it Tom Cotton and David Perdue and Donald Trump, who has lied more than 2,000 times in his presidency, according to the Washington Post's abacus?

Well, we know Trump is lying, because that's what lying liars do.

But our HOT TAKE is maybe the GOP senators from Arkansas and Georgia are such fucking racists it really didn't register when Donald Trump said something egregiously racist. Maybe they are the types of people who think they are not racist, in fact they think they're so not racist that when they say racist things about their black neighbors keeping their lawns neatly trimmed, but on the other hand THOSE OTHER blacks are bad, they start their sentences with, "You know I'm the least racist person in the world, but ..."

We are talking about two white GOP senators from Dixie, after all.

Cotton has a history of using racist dogwhistles in his campaigns. When he was in college (at Harvard, somehow, which sounds like some white people affirmative action to us), he liked to write about how racism would go away if we just stopped talking about race.

Perdue, meanwhile, told a crowd at a conservative wingnut Jesus festival that they should all pray for Barack Obama to die. But he chuckled when he said it, so it was probably just a hilarious joke libtards don't understand!

Also, Cotton and Perdue authored the RAISE Act Trump wants passed, the one that takes a shit on the Statue of Liberty in favor of only letting in the most educated workers, a policy that would have the entirely intended effect of Making Immigration (More) White Again, while kicking refugees directly in the dick.

So yes, we are just raising the possibility that Tom Cotton and David Perdue are garden variety southern bigots and maybe they don't remember Trump being racist because Trump's racism didn't even register in their tiny brains. Maybe if Trump had said something "reverse racist" about how not all white people are perfect, they would have heard it and voiced their outrage.

Of course, it's also entirely possible Cotton and Perdue are just dumb fucking Trump-fellating assholes lying to curry favor with the Orange Shitstain in the Oval. Whoa if true, right????

OR MAYBE IT'S BOTH.

We are only trying to be fair to Tom Cotton and David Perdue, because that's how Wonkette do.