House Democrats, Led By John Lewis, Throwing The F*ck Down 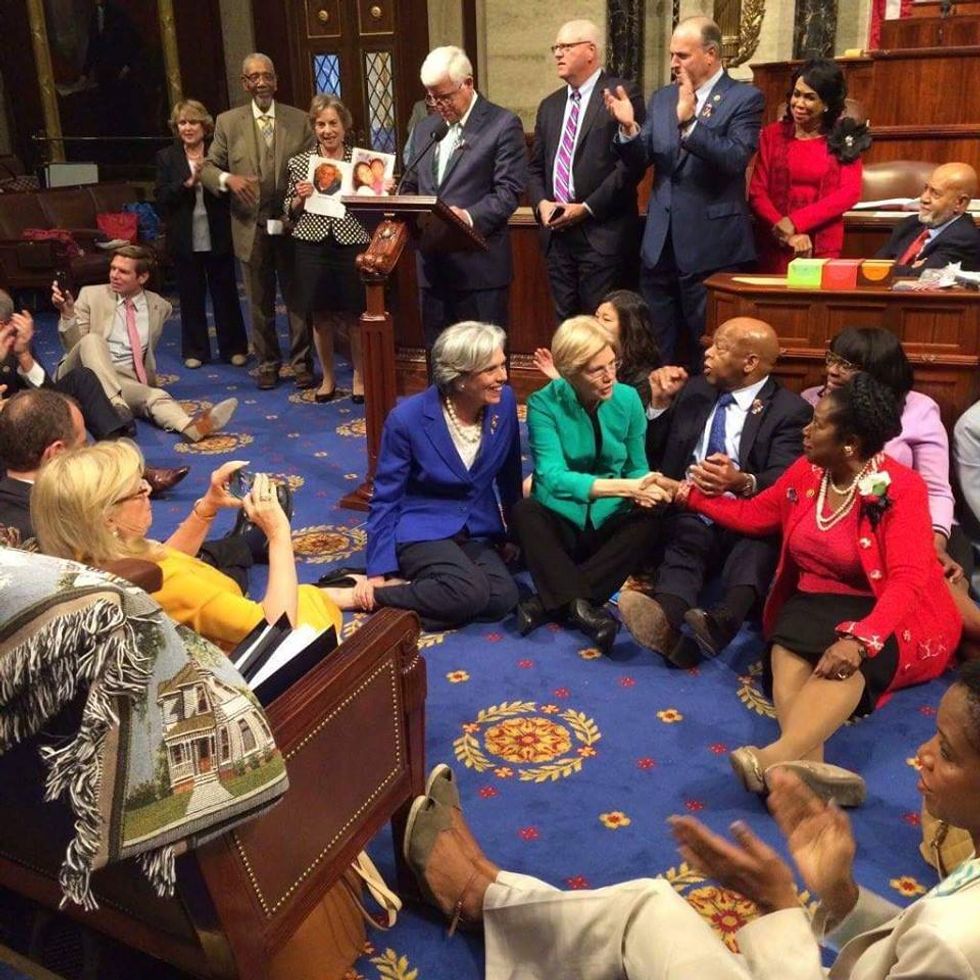 While you were sleeping, Congressman John Lewis continued to lead Democrats from both the House and the Senate in a sit-in to demand action on gun violence; while the Senate had its gun bills murdered in broad daylight by the NRA, Democrats in the House are still waiting.

On Wednesday, when Lewis led Democrats to take over the House floor, Speaker of the House Paul Ryan simply adjourned the session, cutting off C-SPAN's live coverage of the floor of the House of Representatives.

[wonkbar][/wonkbar]Now, it's important to note House rules do not allow for "disruptions" like Lewis's, nor do they allow for recording devices. However, with C-SPAN down, congressmen and women are sneaking their phones in (like Rep. Tammy Duckworth, who hid her phone in her prosthetic leg) to update and broadcast on social media platforms, like Periscope.

Paul Ryan did reconvene the House in the middle of the night not once but three times, in an attempt to make it look like Democrats were somehow impeding necessary action. The first time just made him look like a total dick as he introduced HR. 88, an override vote on on the definition of ""fiduciary." Obviously, Democrats were having none of this shit, so they started singing, "We Shall Overcome" as they struck down the override.

Ryan then brought the House back in session at 1 a.m. to vote on several pieces of legislation. H.Res. 797, which sets rules for debate on HR 2577 was tabled. H.R. 2577, an appropriations bill for H.U.D., D.O.T., and some other related agencies, was sent into committee. H.Res 796 was introduced to amend H.R. 4768, a bad bill intended to allow polluters to shop for a friendly judge if they don't like an EPA regulation. In other words, some Republicans in Congress decided to sweep some dogshit under the rug rather than actually bend over and clean it up.

While we're on the subject of garbage, you may have missed repugnant trash monster Louie Gohmert interrupting Brad Sherman, only to be drowned out by chants of "No bill, no break," and "No fly, no buy." He was then surrounded by other members of Congress, and shushed before he could make a bigger fool of himself.

Other things you missed? Debbie Dingell giving a fiery and passionate speech, and Debbie Wasserman-Schultz reading a letter from Gabbie Giffords to remind you that once in a while she's not a dick.

Finally, there was that time that Rep. Keith Ellison's mom called and told him to shift his ass into gear, then park it on the House floor.

Now, even though the House is in recess (which is like vacation) until July 5, Democrats have vowed to hold the floor of the House until they get a vote. So, if your representative stays in D.C., make sure you send them pizzas or salads, and if your representative decided to go home for the Fourth of July, be a good constituent and send them a strongly worded letter.