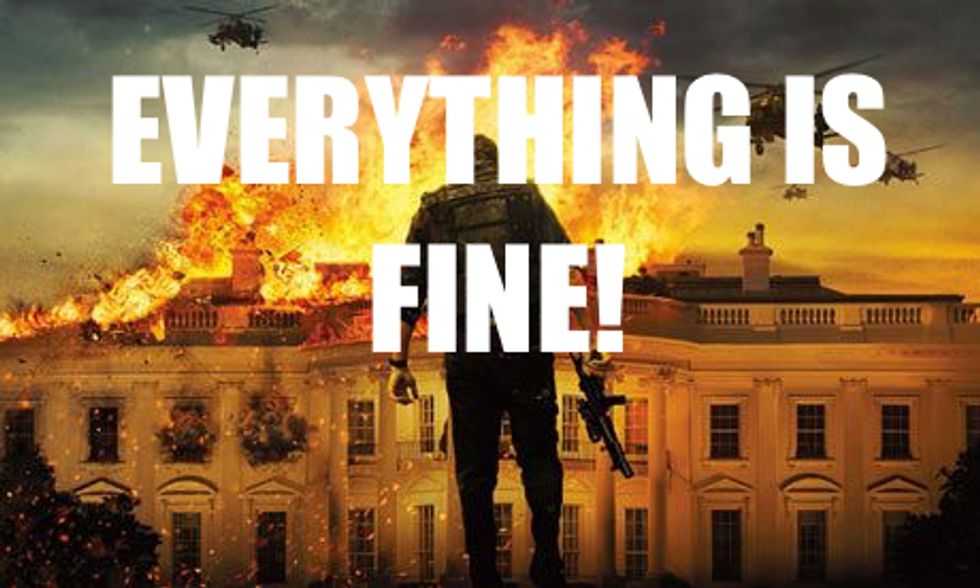 Oversight of the Trump administration will be carried out by the president's millions of Twitter followers, thankyouverymuch. Donald Trump is far too busy presidenting to answer annoying questions about how much money his hotels take in from foreign nationals, or what he owes to Russian shell companies. So Trump summoned his buddy Don McGahn and told him to figure out a way to hit the mute button on all those pesky Democrats with their gotcha questions. Then he went back to watching Hannity.

On May 1, the Office of Legal Counsel produced an opinion memo telling the President that he had every right to tell those Democrats to Suck it, Nerds!

Individual members of Congress, including ranking minority members, do not have the authority to conduct oversight in the absence of a specific delegation by a full house, committee, or subcommittee. They may request information from the Executive Branch, which may respond at its discretion, but such requests do not trigger any obligation to accommodate congressional needs and are not legally enforceable through a subpoena or contempt proceedings.

From here on out, we only talk to VIPs. If you're not a Committee Chair, you're not on the list.

The idea, Republicans said, is to choke off the Democratic congressional minorities from gaining new information that could be used to attack the president.

"You have Republicans leading the House, the Senate and the White House," a White House official said. "I don't think you'd have the Democrats responding to every minority member request if they were in the same position."

Which is like the mugger saying, "You'd take my money, too, if you had a knife. So, this is really an act of self-defense!"

When questioned about the abrupt change of policy, Trump officials responded to the Atlantic, "OBAMA! THUGS! SQUIRREL!"

Did they just say the Obama administration violated the law by cooperating with Congressional enquiries? THEY DID.

So why is Trumpworld being SO LAW ABIDING about withholding information from Congress? Is it all the ways Trump is charging a fair market value for services at his many trash palaces? Or is it his administration's interesting relationship with the Russians?

PLOT TWIST: IT IS BOTH.

But Your Favorite Congressman Elijah Cummings is not taking this shit lying down. The House Democrats thumbed through their own rule book and came up with a 1928 statute called The Seven Member Rule that grants a quorum of seven members of a committee the right to demand documents from the Executive Branch. Never fuck with the nerds!

As their first order of business, 18 House Democrats have a few questions about that new hotel Donald Trump's company is leasing from the federal government. Particularly, they would like GSA to splain them how it is okay for Donald Trump to own a hotel on government property when the lease specifically says,

No member or delegate to Congress, or elected official of the Government of the United States ... shall be admitted to any share or part of this Lease.

In March, the GSA sent the Trump Administration a letter declaring the deal kosher because the Treasury doesn't actually hand Trump a briefcase full of cash each month. Instead, his sons hold the revenue in a trust for Donald Trump's benefit. Which is entirely different!

House Democrats would like the GSA to kick up all the paperwork pertaining to Trump's hotel lease, rightnowplease. But it's a safe bet that the White House isn't about to say, "Okay, since you got a minyan together - here ya go!"

Courts have been mixed on enforcing the Seven Member Rule. In 2001, Democrat Henry Waxman successfully sued to force the George W. Bush administration to disclose Census data. Remember when the biggest thing the White House was hiding was ratfucking House Districts? We were so innocent then!

The Waxman case is bad precedent for Trumpland's efforts to hide GSA documents. Particularly since the GSA is saying that the White House explicitly ordered it to withhold the hotel data from Congress. Luckily, Donald Trump has an advantage Low Energy Jeb's brother didn't have. He knows how to sweet talk those judges!

Wonkette is ad-free! We don't even get any of those sweet Soros dollars! Please help us to make more words!