House Freedom Caucus Is High AF And Ready To Take The Wheel! 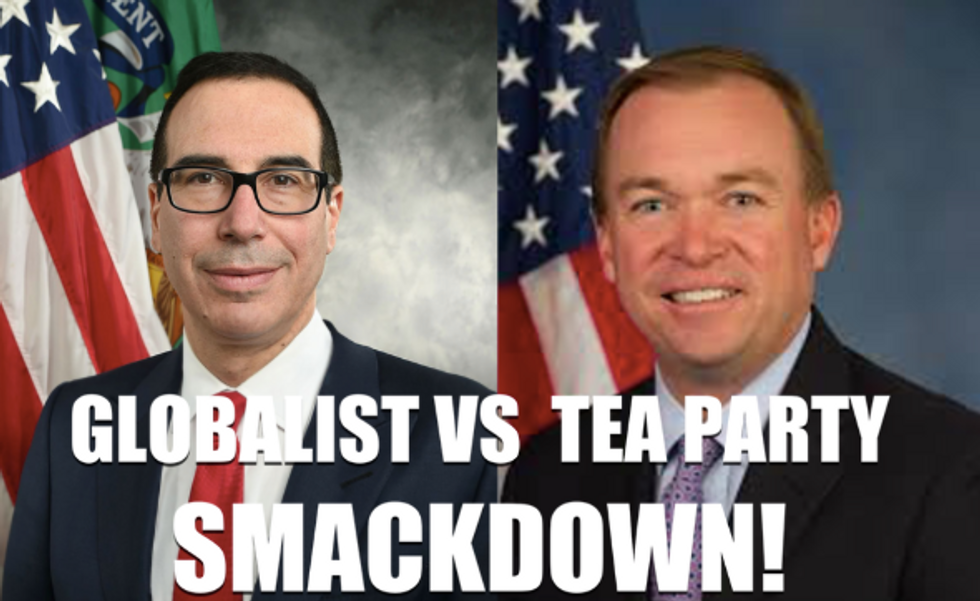 Every crack dealer knows, You Never Get High on Your Own Supply! The grownups in the Republican Party are keenly aware of this, and they don't touch that shit they peddle to the base to get them to the polls in November. But the House Freedom Caucus can't stay out of the stash. They really believe that they're going to grow the economy by getting rid of Obamacare, the estate tax, and deficit spending. Rand Paul's been freebasing that junk for so long, he actually thinks he is Ayn Rand! These fanatics stuck to their principles and watched their healthcare plan explode like a supernova. For which we are eternally grateful!

So what will the legislative crackheads break next?

HOORAY! IT IS THE DEBT CEILING! And we get to watch those two stallions up there naked mudwrestling to see which wing of the party wins.

Just kidding, Steve! Jesus, put your pants back on!

Here's a video to tell you everything you need to know about the debt ceiling.

But for a quick and dirty explanation, just remember:

If Congress fails to raise the debt ceiling, the government will run out of money to pay its creditors and will go into default. And that will be VERY BAD. As in, crash the economy bad.

What kind of fiends would take such a crazy risk? Oh, you already know the answer to that one! In 2011 the Republicans played chicken for so long that Standard & Poor's downgraded the US credit rating. Remember, Congress itself sets the budget and agrees to pay for it. But when the bill comes due, Republicans routinely hold a gun to the economy and demand all kinds of spending concessions, OR ELSE.

Guess who else likes to threaten to crash the American economy as a political tactic.

CHRIS WALLACE: Would you be willing to use the debt limit and risk the possibility of the country going into default to get more spending cuts?

Well, he sure lived up to his plan to be unpredictable! But as with many of his campaign promises, the adults in the Republican party sat down with President Trump and told him not to listen to Candidate Trump, since that guy's a crackhead.

Treasury Secretary Steven Mnuchin will not be presiding over another downgrade in the US credit rating, thankyouverymuch. The Goldman Sachs Globalists at the White House never believed any of that shit about the US economy being like a household budget, and they don't give a damn about increasing the national debt. Since the President and Congress are now on the same team, they'd like a vote to raise the debt ceiling without being shaken down by their own party. Per WaPo,

Mnuchin earlier this summer told lawmakers to raise the debt ceiling in a clean vote that includes no other budget changes before they leave town.

But Mick Mulvaney, director of the Office of Management and Budget, was a founding member of the House Freedom Caucus. Up until recently, he was a Congressman from South Carolina, and he's having a hard time kicking the Freedom habit.

Mulvaney publicly questioned Mnuchin’s call for a clean vote, saying that he would prefer spending cuts or other budget changes as part of any proposal to increase the debt ceiling. Some White House and Treasury officials were incensed to see Mulvaney break ranks, said several people involved in internal deliberations who spoke on the condition of anonymity. [...]

Mulvaney has tried to downplay the rifts but has suggested that his approach was more politically astute.

“It would be foolish of us to come up with a policy devoid of having talked to the Hill,” Mulvaney said to reporters in June.

Meanwhile the House Freedom Caucus members are itching for another fix. They know the federal government is going to run out of money by October 1, and they're not about to be pushed around by some pissant money manager from Manhattan. House Freedom Caucus Chair Mark Meadows is the guy who stuck the knife in John Boehner's back. He's not worried about Steve Mnuchin!

Meadows said that he recently attended a meeting of eight of the most conservative Senate and House lawmakers about how to handle the debt ceiling and that not once did they consider the idea of backing Mnuchin’s proposal for a clean debt-ceiling increase.

On the other hand, Democrats would be thrilled to vote for a clean debt ceiling rise. Because they're not a bunch of irresponsible junkies mainlining The Fountainhead! But Republicans have agreed to abide by the Pedophile Wrestling Coach Rule, which bars them from passing legislation unless a majority of their own caucus approves it. Why should they cooperate with Democrats to save the economy, right? As Meadows told the Post,

The problem is, yes, you could get a clean debt-ceiling, but it would be 180 Democrats in the House with 40 or 50 Republicans, and that’s not a good way to start.

Yeah, that would be TERRIBLE!

So Mnuchin is strapping in for a fight nerdstyle. A source at Treasury told The Post that the pencil pushers are “brushing up on options in the ‘crazy drawer.’” Which means they're trying to figure out who they can stiff without crashing international markets. When Republicans refused to raise the debt ceiling in 2015, Treasury Secretary Jack Lew suspended payments to the postal workers' pension fund and stopped paying federal employee salaries altogether. That was batshit crazy enough. But Mnuchin and Meadows are ON THE SAME TEAM!

Mnuchin doesn't have many friends in Washington, so he's relying on Donald Trump to lean on the loons and get them to fall in line on the debt ceiling. But President A.D.D. couldn't even focus on the Obamacare repeal, and he actually "cared" about that, sort of, in his way. Are we going to be plunged into a debt crisis because someone pulls a firetruck up to the White House and tells Poppy to jump in?

Shit's gettin' weird, y'all! Don't forget to show us some love for our awesome, ad-free splainers!