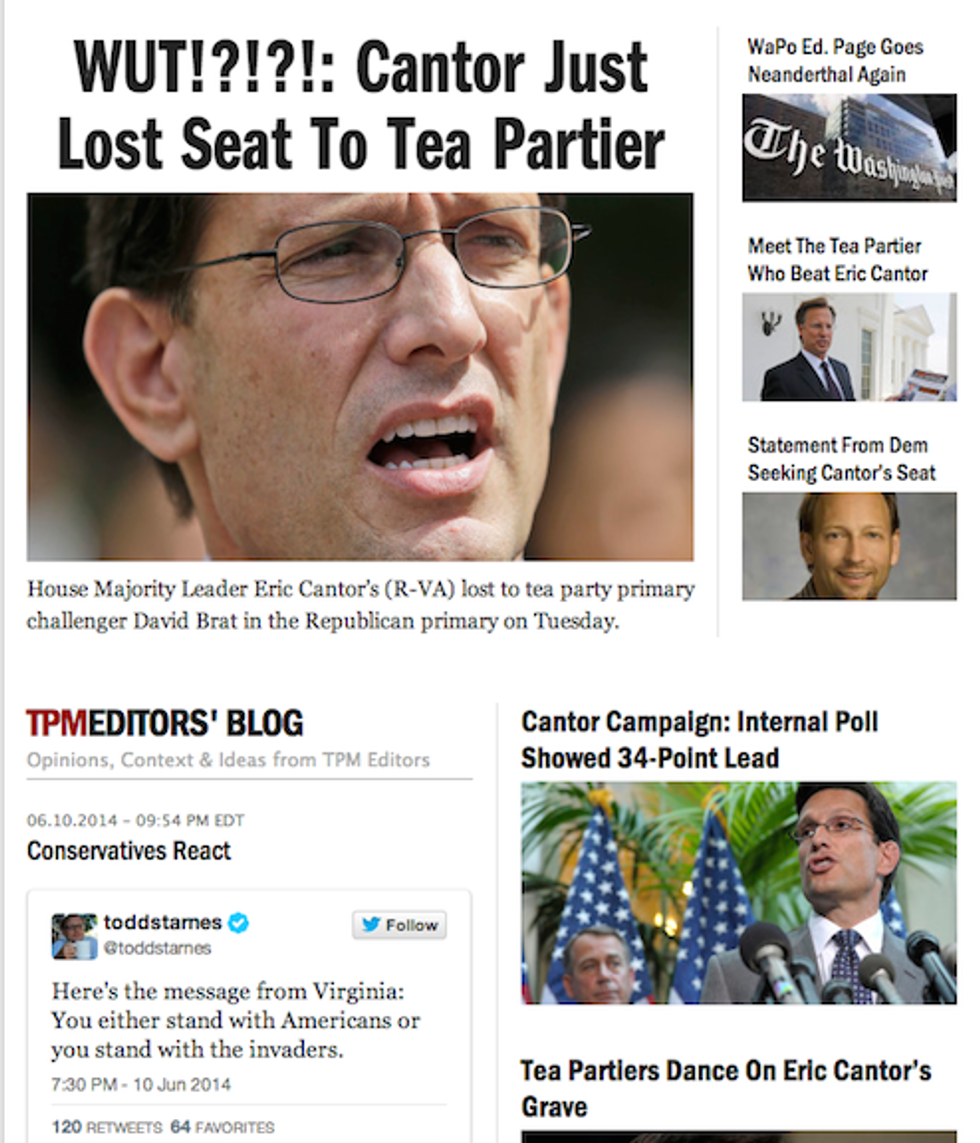 We've been putting off writing about this all night, not because we don't know what to say, but because we wanted to let the anticipation build, to feel a thrill up our leg, to see starbursts, and savor that first perfect moment when we type these words: HOUSE MAJORITY LEADER ERIC CANTOR LOST HIS FUCKING PRIMARY TO A TEA PARTIER OH MY GOD YOU GUYS.

We wish we could screenshot pretty much every page on the internet right now, because they are all just glorious depictions of the Fall of the House of Cantor. We'll settle for just TPM for now.

You guys! He lost his seat to someone named David Brat! Is there any name more euphonious or hilarious that Eric Cantor could have lost to? Oh no there is not.

Seriously, this was completely off our radar. We barely even remembered there were primaries today, and had we remembered, we certainly would have figured that Cantor would steamroll right on over Brat, a person we knew absolutely nothing about until approximately 8 p.m. last night. Thankfully, nearly every newspaper website on Earth has now put together a handy-dandy "Who is David Brat" guide for us. Take it away, WaPo.

Man, that sounds like one good-looking faculty website. We'd go look at it, but we're too busy choking with laughter over Cantor's loss. We're not too busy to go look at the tongue bath Laura Ingraham gave Brat though, because why the hell not.

Mr. Brat’s victory, Ms. Ingraham said, was fueled by “fury with the GOP establishment on fiscal issues and immigration.” He campaigned on opposing the 2008 government bailout program, the budget deal reached by Rep. Paul Ryan (R., Wis.) and Sen. Patty Murray (D., Wash.) and a general sense that leadership ignored the little people, she said.

“The lives of most Americans aren’t getting any better year after year,” Ms. Ingraham said. “Their wages are down or flat as the cost of living is going up. And for the past two years they’ve seen Eric Cantor focus an inordinate amount of time on how to improve the lives of illegal immigrants. So why should they be expected to return the same politicians back to Washington election after election? Eric Cantor was perceived as arrogant and disconnected – and voters thought it was time that he try to find a real job in this lousy economy.”

You will get no argument from us that Eric Cantor is arrogant and disconnected, but we suspect we're not coming at it from the same place as Laura Ingraham.

We're also pretty much beside ourselves with glee that Eric Cantor spent $5.4 million to lose to this yahoo and Mr. Tea Party Yahoo spent next to nothing.

One measure of the extraordinary defeat could be seen in the candidate’s finances. Since the beginning of last year, Mr. Cantor’s campaign had spent about $168,637 at steakhouses compared with the $200,000 his challenger, David Brat, had spent on his entire campaign.

Oh wait! We almost forgot! Cantor's internal pollster showed him winning this thing by 34 points instead of losing by 8. Cantor shouldn't just fire that internal pollster. He should figure out a way to impeach him.

We're sure that the rosy afterglow will wear off soon and we will rue the day we ever heard David Brat's name because he will be Jim DeMint times Paul Ryan crossed with Michele Bachmann, probably, but for now we just can't contain our glee over watching Cantor go down.