House Republicans Love Their Treason Flags, For Some Reason Will Not Comment As To Why 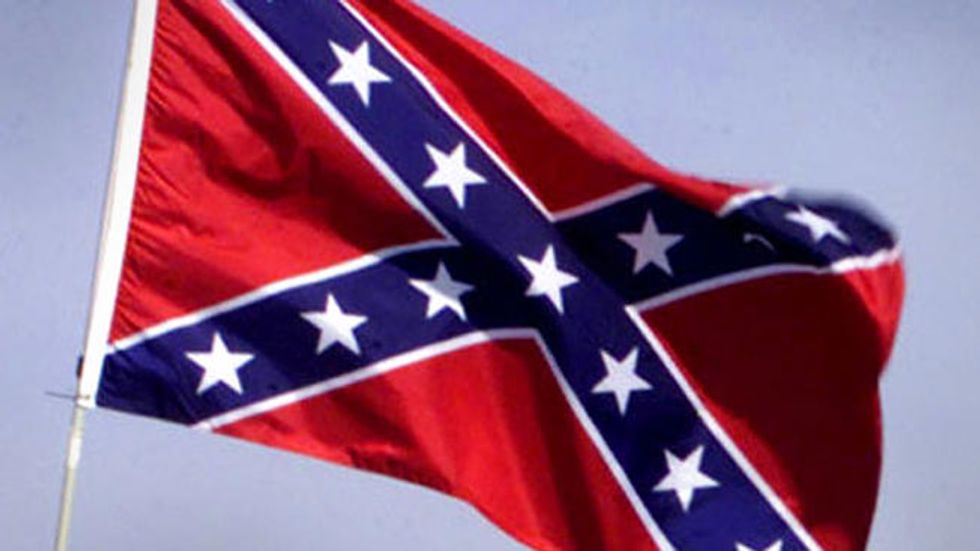 Last week, the United States House of Representatives passed an amendment, presented by Rep. Jared Huffman (D- Not The Confederacy!) that would restrict the flying of large Confederate flags at national VA cemeteries operated by the Department of Veterans Affairs. You know, because it's a pretty gross symbol of racism, and because the South lost the Civil War, and we've certainly given them enough time to come to terms with that and stop flying their stupid flag in the very country they lost that war to.

Curiously, however, The Washington Post reports that though the amendment passed without any debate whatsoever, there were still 158 Republicans and one Democrat who voted against it. It was an actually bipartisan vote of 265-159. Which is pretty unusual! And yet you would think that one of these many, many people who voted against the amendment would speak up and explain their reasons for opposing it, but no.

Well, the Democrat -- a black guy, even! -- did discuss his opposition to the amendment, and it wasn't a bad one.

“While as a descendant of slaves I find the Confederate flag and the history it represents deeply offensive,” [Rep. Sanford] Bishop said in a statement, “I believe that the descendants of Confederate veterans should not be denied the privilege of honoring their dead ancestors two days of the year on a flagpole where their beloved are buried in mass graves.”

Okay, the guy's black, and that seems like he's going out of his way to be principled and fair. Good for him! Anybody else? Oh, giant goose egg?

Perhaps those who voted against the amendment were, for some reason, just very shy about expressing why they believe that a flag that celebrates the killing of our American soldiers should definitely be flown in a cemetery that is literally filled with American soldiers?

Proponents of the Confederate flag often insist that it is not a symbol of racism, but merely of their beautiful heritage of seceding from the United States of America, and killing our American soldiers in order to fight for their "states' right" to own human beings of a particular race as slaves, have those slaves promptly returned to them should they escape, and have more states have slaves so no one could vote them out of having slaves. Which is a totally different thing than racism. And it's not like looking back fondly on those days is racist or treasonous, because there were other things they liked too that didn't even involve being super racist. Like making dresses out of curtains and exclaiming "Fiddle-dee-dee!"

But not a one of these fine legislators brought up any of these very salient points to defend their silent defense of the treason flag. Could it be that they have become sentient and now realize that proudly defending the Confederate flag is a bad look for pretty much everyone, and will never make you look "not racist," but also do not want to upset their constituents? Probably!

Of course, the flag was defended in private. For instance, Pete Sanborn, an aide to Rep. Lynn Westmoreland (R- Definitely The Confederacy) sent out a message to other congressional offices explaining how people who oppose the flying of the Confederate flag were JUST LIKE ISIS.

“You know who else supports destroying history so that they can advance their own agenda? ISIL,” he wrote. “Don’t be like ISIL. I urge you to vote NO.”

Yes, because not celebrating bad things in history is the exact same thing as destroying it, which makes you a terrorist, definitely. This is why we have all entirely forgotten about WWII and the Holocaust, what with the lack of Nazi flags in VA cemeteries and all.

Sanborn was "reprimanded" by Westmoreland, although Westmoreland still voted no on the amendment.

For his part, Rep. Huffman now plans to work on banning the flag from being flown at National Park cemeteries and sold in parks stores. Which would be very nice! They should do that please.