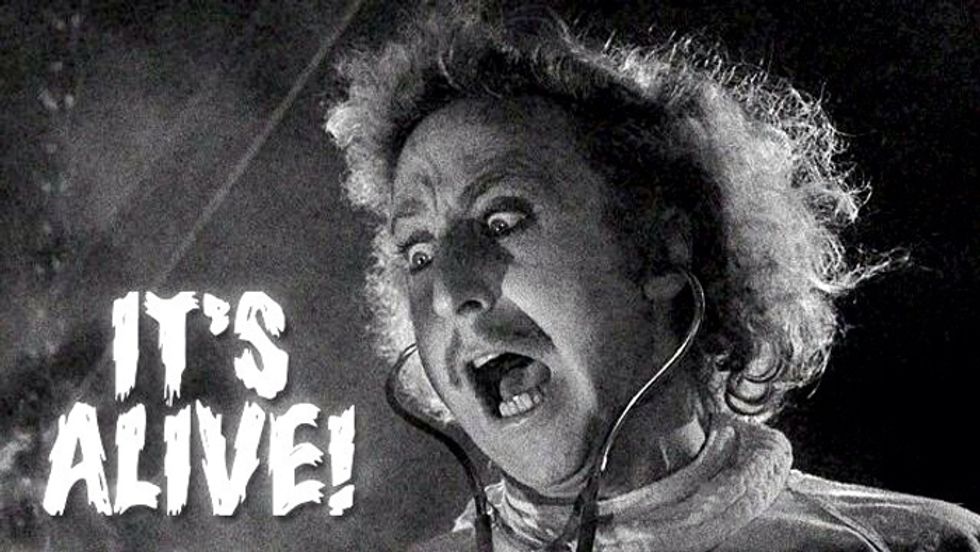 Not that we saw this coming or anything, but House Republicans have decided to give another try to killing off health insurance for at least 24 million Americans, planning a vote for later today on the latest, even more awful version of the "American Health Care Act," if they have the votes. Which they might, this time, because of a brilliant last-minute amendment that will totally take care of everyone with preexisting conditions who can be denied or charged vastly higher premiums for coverage. Here's the exciting new plan to offset the bill's provision giving states the chance to opt out of Obamacare's guarantee of essential health benefits or coverage for preexisting conditions: an amendment allotting $8 billion over five years to help fund "high risk pools," which amounts to handing a bandaid and a couple of aspirin to everyone with a preexisting condition. Yay, all better now!

Following a meeting of House leadership Wednesday night, Majority Leader Kevin McCarthy said it was a sure thing, telling reporters, "Do we have the votes? Yes. Will we pass it? Yes." He didn't add a few other details, like "Do they have any idea how many people will lose coverage? No. Will they wait for a score from the Congressional Budget Office to find out? Hell no -- that killed it the first time."

So how tiny was the G-string the Republican "moderates" thought they needed in order to cover their gutting of the parts of the ACA that most Americans like? Really, really tiny. There's pubes sticking out all over:

Rep. Fred Upton, an influential Republican from Michigan, introduced the amendment that was key to resolving a major sticking point this week. It provides more financial assistance — $8 billion over five years — to help people with preexisting conditions pay for medical costs [..]

Just a day earlier, Upton said he could not support the Republican plan because of its stance on preexisting conditions.

If states do opt out of guaranteeing people with preexisting conditions can get insurance at the same rate as everyone else -- breaking Donald Trump's promise that his Obamacare replacement would absolutely not cost such folks anything extra, as if that matters -- they would be required to at least pretend to provide assistance by setting up "high-risk pools" to help with some of the increased costs. Oh, but surely that whopping addition of $8 billion over five years will cover everyone, right? Haha, we are talking about a Republican healthcare plan here, after all:

“For subsidies to cover 68 percent of enrollees’ premium costs, as ACA tax credits do now in the individual market ex­changes, the government would have to put up $32.7 billion annually,” Emily Gee, a health economist at the progressive Center for American Progress, wrote in an analysis of the plan. “Even after applying that subsidy, high-cost consumers would still owe $10,000 annually toward premiums.”

Well golly, most people can probably come up with an extra $10K a year if they put off buying a fancy new cell phone. Besides, they'll be able to get some of that new money added to the bill by Upton's amendment: Upton said Wednesday, after meeting with Trump, the relatively small infusion of extra funding -- about $1.6 billion a year to help millions of people who'd likely be affected, would "more than cover those who might be impacted." It is unclear whether Upton's own plan will cover the costs of any burns he suffered when his pants burst into flame. High-risk pools have generally had a lousy history, with far higher costs for patients, insufficient funding from states, long waiting periods to even get coverage, and many people being priced out of coverage altogether. And $8 billion over five years will fall far short of the likely need.

Robert Graboyes, a senior research fellow at George Mason University’s Mercatus Center, called the $8 billion “a pittance” and said previous high-risk pools have tended to run out of money. “Promising we are going to cover everyone with preexisting conditions is kind of a heartwarming thing to say. But . . . either you fund it, or you don’t make the promise.”

The great news is that after five years, nobody will have preexisting conditions anymore, because they'll all take better care of themselves and not be so sick. Or they might just die.

“What you would need is probably about $200 billion over 10 years. What they’ve done is $8 billion over five years. If you divide that by the number of people who have a pre-existing medical condition, you get about [$200 or $300] a year,” Pelosi said during a press conference outside her office in the Capitol.

Kentucky Democratic Rep. John Yarmuth noted that, in the years before the ACA when 35 states had high-risk pools, they only covered 226,000 people nationwide -- and even that coverage was inadequate. Yarmuth also noted the House's pretense of letting the states use their wisdom to provide help to those with preexisting conditions "depends on state governors and legislatures that are compassionate," and pointed to his own state's governor, Matt Bevin, as an example of why that's unlikely to work out in practice, since Bevin "wants to dismantle the whole system."

This latest abomination from the House is, of course, still opposed by groups including virtually all medical professional organizations, as well as advocacy groups from the AARP to the March of Dimes. The president of the American Medical Association, Andrew Gurman,

warned in a statement that “none of the latest legislative tweaks under consideration changes the serious harm to patients and the health care delivery system” should the bill pass. Millions would still lose coverage or have to pay far higher insurance costs “as a direct result,” Gurman said.

Alabama Rep. Mo Brooks Would Rather Not Pay For Your Slut Cancer!

If we can't use health insurance to punish people, what's the point of having insurance at all?

Son Of The Obamacare Repeal That Would Not Die Part 3: The Stupiding

You know what really Conquered The World? SINGLE PAYER.

Similarly, the AARP sent a letter to legislators warning that the amendments to be voted on today "would make a bad bill even worse," and would greatly increase the out-of-pocket healthcare costs for people aged 50 to 64, which is perfectly fine with Republicans, since after all those people need to take some responsibility for their bad lifestyle choices, such as aging. Not that House Republicans are risking their own health coverage: The bill still contains that dandy amendment exempting members of Congress and their staffs from any limits on coverage their home states may decide to opt out of.

The only good thing about this shit sandwich: Even if it passes the House today, there's not a chance in hell it would make it through the Senate, where any ACA repeal could only lose two votes and still pass (the Rs are doing this through the budget reconciliation process, so a filibuster isn't possible). It's still unclear what kind of godforsaken monster the Senate would create, if Senate Republicans even touch the thing. But even if the Senate doesn't go along with the most extreme measures in the House bill, the Republicans who vote for it today will have that vote on their records, which for some teabaggers is all that matters. And, we can hope, will also help elect enough Democrats in 2018 to take back the House. People tend not to like having their insurance taken away.

Update: Oh, yeah, how could we forget this brilliant headline from the Salt Lake Tribune on Jason Chaffetz's decision to rush back to DC to vote on this monstrosity:

Yr Wonkette is supported by reader contributions. Please click the "Donate" linky below!