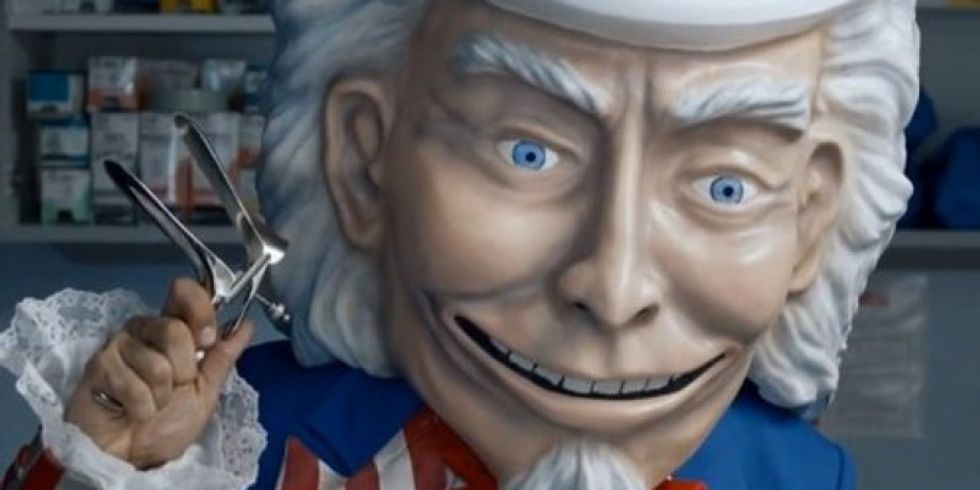 Republicans love tradition, and that is why on Thursday, on the anniversary of Roe v. Wade (haha, take that, ladies!), the House held its traditional vote for the No Taxpayer Funding For Abortion Act, which they introduce every single congressional session, because tradition!

But is that really enough? Nope! Which is why Republicans always want even more laws that ban the already-banned funding for abortion even more, even harder.

This year's vote had a neat twist, though. It was intended as a consolation prize for the foaming-at-the-mouth "pro-lifers" who have been foaming at the mouth with extra foam since the House aborted its preferred in-honor-of-Roe bill banning ALL the abortions after 20 weeks, no matter who's paying, because Big Government is bad except for when it's not.

Hero Jackie Speier -- a Democratic representative and genuine hero who is always, like, "Hey, you Republican pricks, stop cutting food stamps!" and "Hey, you military pricks, stop sexually harassing all the ladies!" -- took to the House floor to do that thing she does:

You know, in some respects, you look around this room and think, ‘is this a chamber of Congress, or a doctor’s office?’ we might as well have stethoscopes here, and stirrups, and speculums because that’s what you’re doing. You’re trying to come between a woman and her physician. [...]

We’re here again, having yet another debate, when American women in this country are far more interested in equal pay for equal work, and paid sick leave, for a childcare tax credit that has some resemblance to what reality is in this country. Rather, we will continue to act like doctors here. And I might add there are even some hypocrites on the other side of the aisle who have counseled their own girlfriends to have abortions. It’s legal, members. We have a right to maintain this legality.

But of course Republicans didn't listen to her, because she's just some dumb lady, and what does she even know about abortion anyway, except for how she talked about having had one her own self one of the other times Republicans wanted to shove Big Government up every Lady-American's special lady place, so maybe she does know something about it? Nah.

Traditionally, once the House passes this bill, when Democrats rule the Senate, they roll their eyes and ignore it completely. But now that Mitch McConnell is in charge here, and he's focused on Doing Leadership Like A Real Leader, the Senate might actually waste some time voting on this dumb thing to make an already illegal thing even more illegal. At which point, President Obama will have to roll his eyes and whip out his veto pen and scribble "This is already banned, dummies" before he can move on to vetoing all the other dumb things Republicans want to waste time on, like banning ACORN and arguing about whether God or greedy scientists invented the "hoax" that is "climate change" or how to amend the Constitution to keep it exactly as Jesus originally wrote it, amen.