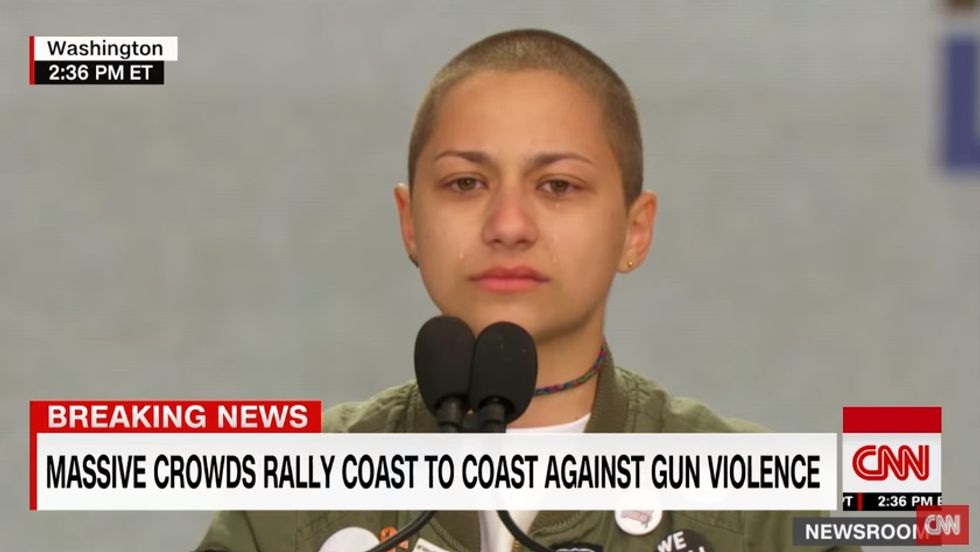 Just in case you missed it -- how did you miss it? -- there's Emma Gonzalez's incredible speech at Saturday's March For our Lives, during which she pointed out that the attack at Marjory Stoneman Douglas High School lasted six minutes and 30 seconds before the gunman hid his AR-15 and slipped out with the escaping students. A couple minutes into the speech, Gonzalez stopped speaking and stood there in silence until a timer went off, and she closed her speech by noting that her entire speech had taken as long as the rampage. She later took to Twitter to point out that the silence hadn't been six and a half minutes -- the silence was shorter:

So how did rightwingers respond to that amazingly powerful voice (and her equally powerful silence)? Easy! By fixating on the fact that Gonzales, who is Cuban-American (her father came to the US in 1968) was wearing a COMMUNIST FLAG!!! And you know what's not allowed in communist countries like Cuba, North Korea, Australia, and Canada? Private ownership of assault rifles, to prevent tyranny! (Happily, in Somalia, everyone can have a Kalashnikov, and look at all the freedom there!). But the point is, obviously this gal is a COMMIE, as Iowa Rep. Steve King's Facebook page bravely pointed out:

Got that? We weren't sure if the "this is how you look" bit was about Gonzalez crying like a wimp just because 17 people were murdered at her school, or because she looks like a commie rebel in that olive shirt and buzz cut, but it's definitely bad to look that way and to wear a communist Cuban flag. If only Cubans had lots of guns, they could have overthrown a corrupt dictator, and that's why Americans need all the guns they can get.

Also, anti-immigrant cantaloupe-head Steve King -- or rather, his campaign staff -- finally found the only Latina in the United States they'll ever criticize for not speaking Spanish.

As WaPo notes, King's campaign team got into some very well-reasoned arguments with people who said maybe it was a low blow to mock a girl who lost friends in a school shooting:

Pointing out the irony of someone wearing the flag of a communist country while simultaneously calling for gun control isn’t ‘picking’ on anyone. It’s calling attention to the truth, but we understand that lefties find that offensive.

A King campaign spokesperson told WaPo this was simply accurate discourse about the communist hellhole future that Emma Gonzalez obviously wants for America:

"[The] meme in question obviously isn’t an attack on her ‘heritage’ in any way,” the spokesman wrote in an email. “It merely points out the irony of someone pushing gun control while wearing the flag of a country that was oppressed by a communist, anti-gun regime. Pretty simple, really.”

You see, this is what the flag of Communist Cuba looks like:

If Gonzalez wanted to wear a flag that reflected her "heritage," she obviously should have worn a patch on her shirt that showed the flag of Cuba before the 1959 revolution, which looked like this:

Hey, Iowa! Remember what this shithead did this fall, will you? Oh lordy, in King's district, they may remember it fondly ...

In other Great Moments in Lying About Emma Gonzalez this weekend, some very clever rightwingers took a photo and a .gif file from a Teen Vogue article, showing Gonzalez tearing up a gun range target, and faked it -- rather badly -- to make it look as if she were tearing up the US Constitution, because isn't that what these kids REALLY want to do? Here's the REAL .gif:

Now look at the faked version, which floated around rightwing Twitter until Adam Baldwin tweeted it to explain that these kids are literally the Hitler Youth (WaPo helpfully notes Vorwärts! -- "Forward!" -- was part of a Hitler Youth marching song):