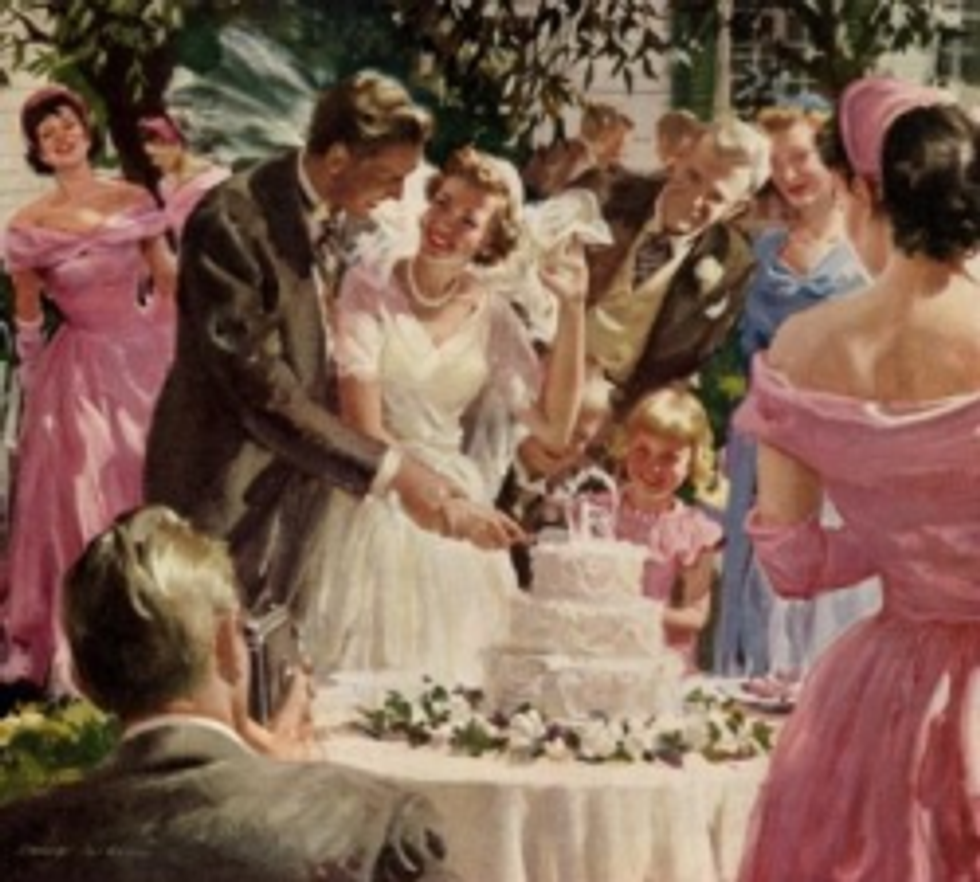 After a man went on television for a very low-profile announcement that he is now back to feeling about gay marriage the way he felt in the fun 90s, the world erupted in praise ... and backhanded praise and faint praise and no praise AT ALL! You are surprised, we know. Jim Daly, the boss of some Christian society called CitizenLink, decided to put up this lovely picture of two blonde straight people marrying on his blog, Finding Home, a blog for those of all sexual persuasions who forget where they live after a night of drinking at a strip club. Elsewhere, the Log Cabin Republicans implied that if Obama was a real leader of America, he would be looking at his calendar and seeing that North Carolina just banned same-sex marriage the very day he decided he now supports same-sex marriage (again), and how rude of him to distract people from this step backwards with his two-or-so steps forward. Somewhere in a desert, probably completely unaware of Obama's special time, Romney declared that same-sex marriage is not an "issue of significance." Plus, Rick Santorum needs cash.

Here are some more fun words.

Rick Santorum (whose website reads THANK YOU. WE STILL NEED YOUR HELP. DONATE):

The announcement today by President Obama should come as no surprise to the American public. President Obama has consistently fought against protecting the institution of marriage from radical social engineering at both the state and federal level...Thankfully the American public, when it has had an opportunity to consider the real world consequences of such a fundamental change to our society, has consistently voted for maintaining one man one woman marriage - the basic building block of our society. I will continue to fight to make sure that the cultural elites don't further undermine the institution that gives the best opportunity for healthy, happy children and a just and prosperous society.

Cue some cynic at the Daily Beast:

Denying marriage rights to same-sex couples inflicts real harm on real people, while doing nothing to prevent the deterioration of marriage among non-affluent Americans.

Presumably straight people are also being "socially engineered" to hate each other by...Obama? Cheetos? Buddhism?

CitizenLink, which is an affiliate of Focus on the Family, decided to just mainly talk about North Carolina's "progress" yesterday and to just also politely add that anyone who agrees with Obama is basically A SHITTY CHRISTIAN:

This is obviously a hot-button political issue on which there is much disagreement nationwide, and people of good faith will come to different conclusions.

Shep Smith says Obama now in "21st century." He's right, except it's 21st century BC: time of Sodom and Gomorrah.

One guy looked it up in the dictionary and nope, Obama is wrong.

Even the dictionary, Webster’s Dictionary, says marriage refers to a male and a female.

-- Pastor Jim Cookson of the National Avenue Assembly of God in Springfield, Missouri.

Jim DeMint has a super creative way of looking at this:

Obama told Americans he supported traditional marriage in his 2008 campaign… Another one of the President’s broken promises.

Log Cabin Republicans appreciate that President Obama has finally come in line with leaders like Vice President Dick Cheney on this issue, but LGBT Americans are right to be angry that this calculated announcement comes too late to be of any use to the people of North Carolina, or any of the other states that have addressed this issue on his watch. This administration has manipulated LGBT families for political gain as much as anybody, and after his campaign’s ridiculous contortions to deny support for marriage equality this week he does not deserve praise for an announcement that comes a day late and a dollar short.

"It's sad when [Obama] can't stand up and accept what the majority of the people desire." -- Tampa Bay pastor John Garcia. Heh, what majority is that?

Finally, we have pig Romney being interviewed somewhere in the desert on Wednesday afternoon, inadvertently telling us how he feels about same-sex marriage and two other issues: medical marijuana and tuition rates for undocumented children. After a mere two minutes, King Romney interrupts the lady reporter with this: "Aren't there issues of significance that you'd like to talk about?" Well that clears that up. [Think Progress and many more]