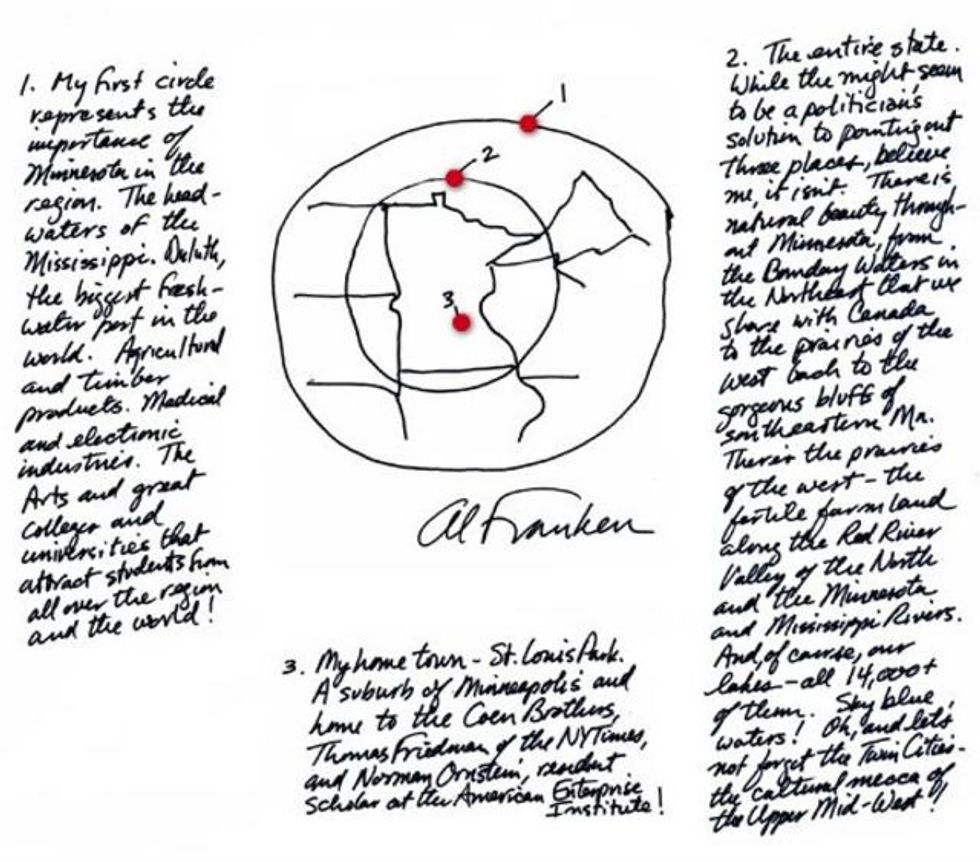 Yesterday Sen. Al Franken drew “the portrait blogged around the world” when he pencilled a little sketch of Alabama Senator/Grand Wizard Jeff Sessions during the Elena Kagan confirmation hearing. (He also napped, but you can’t auction that off at Sotheby’s.) Everybody seems to agree that Franken has mad drawing skills. Where on earth did they come from?

Many people would say "God" or "genes," but these are totally wrong answers. Franken's artistic prowess actually developed soon after a chance encounter in the early 1980s with fellow Minnesotan and artist Prince, who told him to purify himself in the waters of Lake Minnetonka. Franken complied, and soon afterward began drawing his way into America’s hearts. He did this mainly by making maps of the U.S. from memory while telling joke stories that were almost always funnier than almost anything that Garrison Keillor has ever done. In fact, he’s map-made pretty much everywhere he’s traveled, from the show formerly known as Late Night with David Letterman to the Minnesota State Fair to the historic "Al Franken Celebrates Denim" fund-raiser and fashion party.

Franken’s also created the iconic work "Minnesota With Scribbles", which hangs in the Whitney Museum of American Art's satellite gallery in Duluth (it's inside a gas station off I-35). And now we have evidence of his forays into the portrait arts. What can't he draw?

If Franken ever wants to parlay all his drawing talent into a bona fide art career, following these steps might help:

You Wonketteers who harbor artistic aspirations might also try out this advice, but it's not recommended. [Fox]